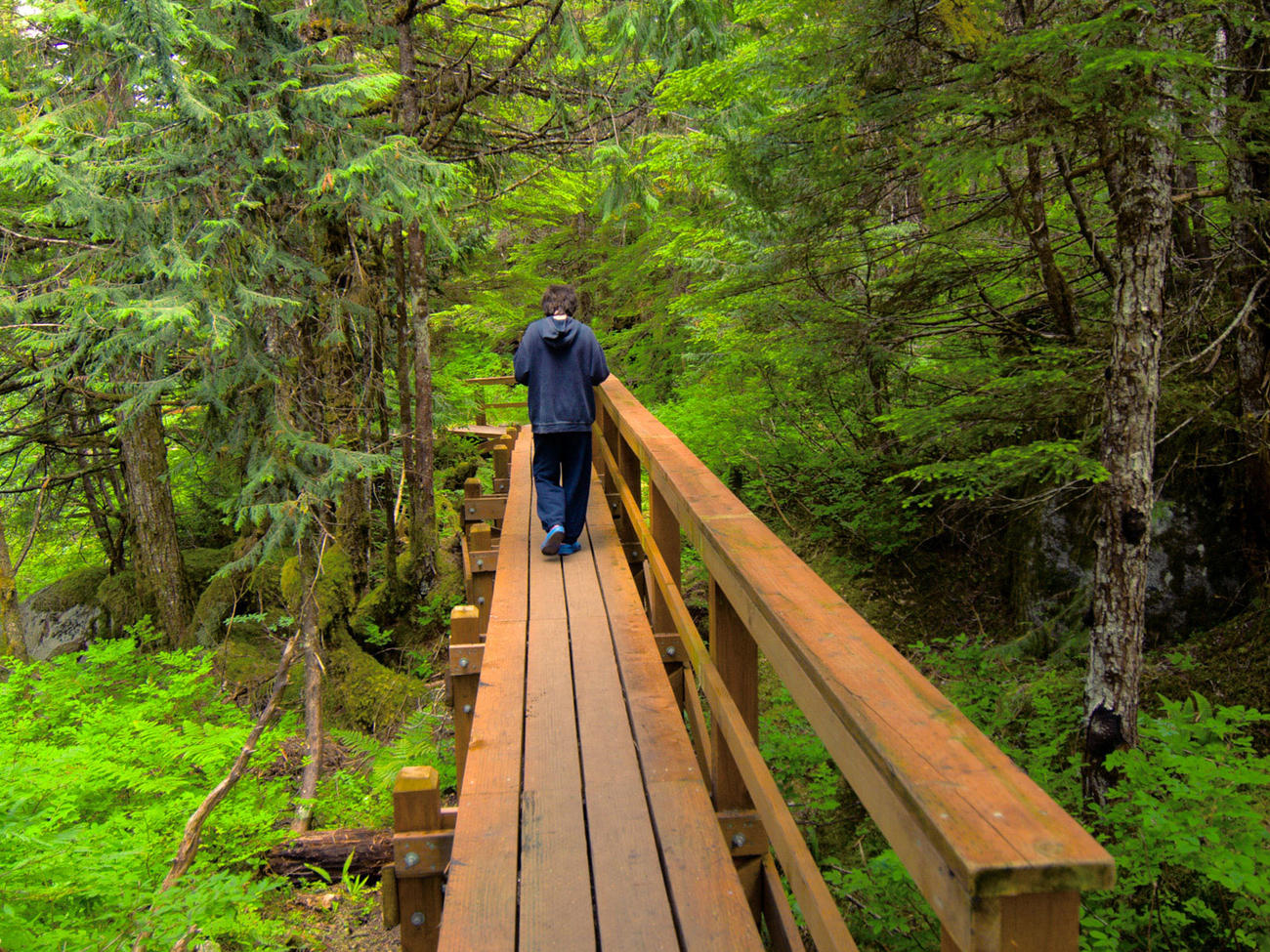 Blaine Harrington III / Corbis
Elevated paths connect hikers to Baranof Lake.
Written by Edward Readicker-Henderson and Natalie Blackmur April 16, 2013
Share this story
“Are you sure you don’t need a map?” The guy at the rental car agency looks confused, like I’d ad-libbed from the customer-service script he memorized. “Still 7 miles of road one way from downtown, 7 the other, right?” “Pretty much. But there’s a new traffic light. We have two now.” There weren’t any when I left Sitka, high school diploma clenched in my hand, on my lips a determined vow never to return. Just like every kid from every small town. And like most of them, within a year, I was back. Then back again, and again. In the 30 years since I set off from this tiny sliver of the Alaska Panhandle, I’ve taken every excuse possible to return. Not because it’s home—everyone I care about is long gone. It’s simply the spot on the map where the world makes sense to me. I wheel my bag across asphalt, the air around me thick with the familiar scent of ocean, fish, boat oil, and trees. I find my car at the end of the lot, and I can tell I’m back in Alaska because it’s speckled with eagle poop. See a place for the first time, you’re never sure you’re looking at the right things. Live in a place, and you see the things that have become your life. But come back to where you once lived, and it sneaks up and surprises you, shows you what you missed before.
Brown Cannon III / Intersection Photos
In Sitka, less cruise traffic means more Alaska quiet.

When people find out I grew up in Alaska, they want to hear snow and ice and polar bears. But Sitka is eagles over a whale-filled sea, a rain forest where the only bears are grizzlies. Lots of those. They’d get stuck in your dog door. Or wander down off Gavan Hill to peek in on the school, making social studies class a lot more fun.

Save a traffic light or two, Sitka itself hasn’t changed much. Alaska’s fourth-biggest town, with about 9,000 people, lies on the outer edge of the Alexander Archipelago, the chain of islands that snakes down parallel to the Canadian coast. It’s the only one of Southeast’s towns where you can see the open ocean, stretching away toward Japan, interrupted by tiny barrier islands that make the water in Sitka Sound so smooth that a landing seabird’s wake can be 100 yards long. While neighbors Juneau, Ketchikan, and Skagway see close to 900,000 cruise ship passengers a year, Sitka gets a fraction of that, about 100,000. Which means this town has been able to remain itself. Each spring, locals take a lesson from the Native Tlingit and go down to the beach to eat herring eggs straight off sea kelp. There’s no festival or cheeky news stories to announce the event; it’s just something people do, have always done, here.
Larry Ulrich
St. Michael’s Cathedral.
I pull the car onto Sitka’s main drag and park across from the old bookstore, where I begged for a job at least once a week when I was in high school. I get out and walk over to where the street splits around the town’s main attraction: St. Michael’s Cathedral, the gateway to Sitka and always my first stop.

In 1799, after the Russians killed everything with fur in the rest of Alaska, they moved their capital here, calling it New Archangel. Which didn’t exactly thrill the Tlingit, who’d spent centuries in the place they called Shee At’iká. The major battle came in 1804: The Russians had big ships and lots of gunpowder. The Tlingit understood the landscape. They melted into the forest and kept raiding for another 50 years.

The harried Russians hired Finnish shipwrights to build the double onion domes of St. Michael’s. But that’s not the church standing today. Late on January 2, 1966, someone spotted flames in the cathedral and raised the alarm. Half the town turned out. They broke down the doors, formed a human chain, and retrieved artwork, icons, and statuary as the building burned to the ground around them. Nearly everything vital was saved, nobody was hurt, and the Russian church became Sitka’s church, because the town itself had rescued it.

Each Sunday, services are held in English, Tlingit, and Church Slavonic. Outside, the blue-gray domes blend into the sky’s dripping clouds, the ones that hide the mountaintops most of the year. Tourists call the weather here rain; locals call it Sitka sunshine. But today I notice something I’ve never seen before. I catch the church from an angle that looks back toward the sea, and it blends right into the waves as they split around the barrier islands that protect the town from the wild Pacific. Maybe that’s really why the Russians hired shipwrights: to make a building out of water, a mirror of sea and rain. With that in mind, I decide to go see what else might look different to me today. I stop by my favorite reindeer sausage stand for a bite, before climbing back into the car and driving the 7 miles south.
Brown Cannon III / Intersection Photos
Sitka’s sea otters can be seen from the shore.
Water is everywhere in Sitka. It’s in the rivers, the rain, the Sound. But as beautiful as it all is, the ultimate spot is Silver Bay. The bay is so still that reflections make it look like bald eagles are swimming upside down in the ocean. A few humpbacks stay here year-round, forgoing the trip south to Maui made by most of Alaska’s whales. You can hear them exhale from more than a mile away. When they do finally appear, their tails cut the surface in the shape of folding hands. No whales today, though. I wait, scanning the horizon until my skin is as wet as the rain-forest air. As I search, I notice the ravens in the tops of trees, making a sound like drippy faucets.

It makes me wonder what else I haven’t yet noticed. So it’s back in the car and on the road, where I pick up a hitchhiker who’d been camping in the woods for a week. He’s 20 years younger than I am and armed with a high-caliber rifle, not an uncommon sight in these parts.

We know the same people; we had the same teachers in school. Sitka never changes, but everything changes. He knows better spots for picking berries than I do, and when I drop him off, I get to see one of the new traffic lights. It’s oddly exciting.  Sitka, I’m thinking today, is a town built like a matryoshka doll, histories nesting inside histories. Which does leave one question: What’s the smallest doll inside, the one everything else is based on? If the Russians built their church out of water, what did the Tlingit, who knew the place best, do with the landscape? So I drive to the only place I can think of that answers that: Sitka National Historical Park. Totem Park, as locals call it, is a 10-minute walk from the cathedral. But that 10 minutes is the difference in how the Russians saw the land—something to conquer and then mirror before it was too late—and how the Tlingit saw it: as home. Long ago, I went on a thousand dog walks in this park. Walked with the first girl I ever truly loved, a girl who, when we talk about Sitka now, both wishing we had even more reason to go back, just says, “It’s too beautiful, too green, too fresh, too real.”
Larry Ulrich
Totem Trail is a 10-minute walk from town.
I follow the trail that leads along the shoreline—a low mudflat in low tide—and into the forest. It takes a minute to notice the forest is looking back. First in glimpses, the carved bears, eagles, orcas, wolves. And then they’re suddenly as clear as a whale’s exhale. The Tlingit vision of the landscape, carved in cedar totem poles. Totem poles are not religious, they’re legends, tales, the history of the place and how you should live in it. And this, I realize, is my Alaska: no snow and ice and polar bears, but something carved into the very way I think about the world. Glimpses of truth and wonder seen through rain and clouds and forest shadow. I walk, not caring if the next eagle I see, whale I see, is real or wooden. Not caring if I’m in a church or on the beach looking out at water that looks like a church. No matter. I’m walking in beauty.  WHAT TO SEE & DO IN SITKA St. Michael’s Cathedral. Follow the noon bells to the center of town and, if you’re lucky, you’ll catch a peek of the two bald eagles that roost atop the church’s cross, in near-perfect imitation of the classic Byzantine eagle iconography. $5 donation; Tue–Thu or by appointment; 240 Lincoln St.; (907) 747-8120. National Historical Park. The best way to experience Sitka’s towering totems is along Totem Trail. The short hike winds through dense spruce forest to the mouth of the Indian River, where salmon come to spawn from July to October. The visitor center can set you straight on wildlife viewing and totem carving. nps.gov/sitk Sitka Summer Music Festival. Bach and Beethoven match the jaw-dropping views of Sitka Sound from Harrigan Centennial Hall, the venue for the festival. Afternoon concerts are free on Thursdays, or watch the moonrise during one of the weekend performances. From $25; Jun 7–Jul 6; sitkamusicfestival.org Larkspur Cafe. Lots of restaurants serve salmon chowder, but nowhere else will it come out this creamy and delicious. (The secret ingredient? Mashed potatoes instead of flour.) The soundstage at the back of the restaurant is the broadcast center for the local radio station upstairs. $$; 2 Lincoln St.; (907) 966-2326. Reindeer Redhots. Your intro to Alaskan street food should be the reindeer hot dog at this corner stand. The gamy-smoky snack goes down even better when touched up with add-ons like chili and sauerkraut. Look for the red-and-yellow umbrella. $; Lake St. at Lincoln St.; reindeerredhots.com