Beyond Portland Harbor, the Willamette River feels remote and refreshing 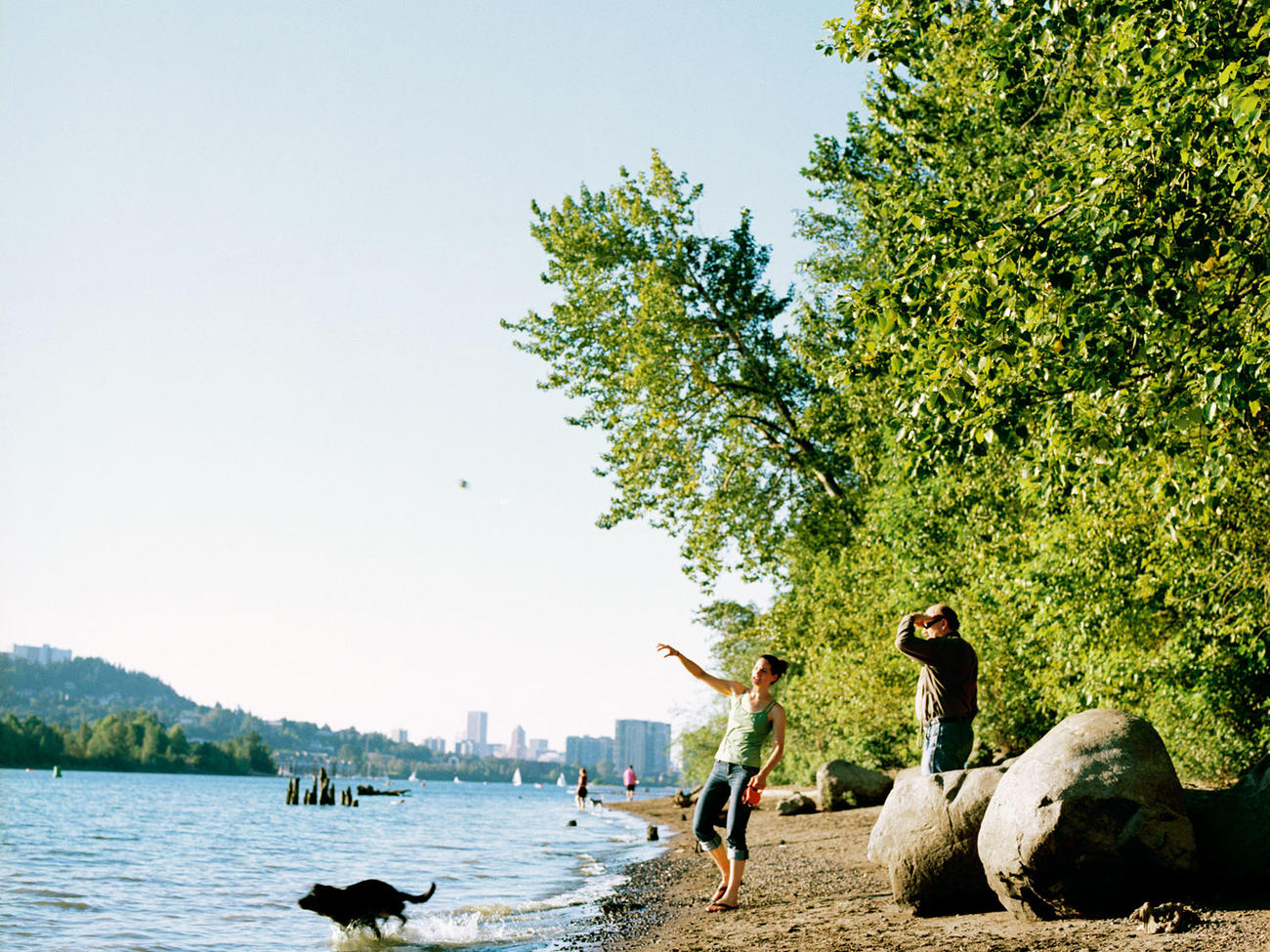 John Clark
Written by Bonnie Henderson August 13, 2004
Share this story
It’s hard to believe that nearly three of four Oregonians live within 20 miles of the Willamette River’s banks―here on the water, we feel as if we’re miles from civilization. We’re on day four of a five-day guided trip with Paddle Oregon. The journey covers 26 miles on the largest river that’s entirely within Oregon, and other than one small town and the 4 or 5 miles it has taken to approach and paddle past Salem, we’ve seen only farms, water, and woods, smelled only the perfume of cottonwoods, heard only our own voices and the calls of birds. At daybreak we carry the canoe down a short dirt road at Wigrich Farm, just downstream from the Buena Vista Ferry, and put in among the Willamette River’s reeds, rocks, and cottonwood trees, their green scent like the river’s breath. We drift past tangles of trees and shrubs that obscure the farms beyond, spotting a kingfisher from its rattling call. The century-old stone storefronts of Independence, Oregon, come into view and just as quickly fall away. A long sandbar appears; a creek tumbles in. Soon we’re paralleling a noisy highway, heading straight toward the center of Oregon’s second-largest city, Salem. Scattered homes appear on the right bank. Then they recede, and we’re back to wild river. “If you’re a person who likes solitude, don’t go to the Deschutes River in the summer, don’t go to the Rogue,” says Rick Bastasch, director of the Willamette Restoration Initiative, a group seeking to help coordinate efforts to protect and restore the health of the Willamette watershed. “Go to the Willamette.” With warm air and refreshing water beckoning, there’s no time like August to do just that. Riverfront fun Now that cities from Eugene to Portland are enhancing access to the river, the Willamette is becoming more of a destination than ever before. Eugene recently completed most of its 12-mile riverbank trail system. Corvallis’s Riverfront Commemorative Park (on S.W. First St. south of N.W. Tyler Ave.), completed in 2002, engages visitors with its paths, interactive fountain, and the growing restaurant row across the street. Improvements on Salem’s Front Street are helping connect downtown visitors to the stellar Riverfront Park (on Front St. south of Center St. Bridge); by next summer, the park will have a new, 226-foot dock serving craft ranging from the Willamette Queen excursion stern-wheeler and ski boats to canoes and kayaks. A 360-foot public dock near Clackamette Park in Oregon City is scheduled to open in summer 2005 as well. It all makes a very rosy picture. But it’s only half the story. The Willamette’s many problems range from an old mercury mine at its headwaters to toxic contaminants in the sediment at Portland Harbor. But it has come a long way since the early 20th century, when the river was so polluted that fish couldn’t survive in it. “For years we’ve heard, boo hoo, there are all these problems with the river,” says Travis Williams, who is canoeing beside us. Williams is the organizer of Paddle Oregon and a member of the watchdog group Willamette Riverkeeper. “But once you get on the river you realize the river moves, it’s very scenic, it’s dynamic, it has lots of wildlife…I think when people have an opportunity to travel the river and establish that connection, it’s generally very surprising.” A shining resource The surprises began in the 1960s, when construction of sewage-treatment plants and cleanup of industrial discharge began to bring fish―and people―back to the Willamette River. Projects like Portland’s Westside Big Pipe are helping finish the job of keeping sewage out of the river.

The main challenges today are riparian habitat restoration, cleaning up river sediments such as those in Portland Harbor, and tackling runoff from streets and other sources of nonpoint pollution.

“It’s not that we don’t have challenges,” Bastasch told me before the trip. “We do, and we need to be hard at them. But the Willamette River is first and foremost a treasure, not a problem. There’s just so much happening along the river.” Back in our canoes, there’s plenty happening: a quick drawstroke to the left as we negotiate the musical riffles at the head of Darrow Bar; the splash of an osprey diving for a fish at the end of Windsor Island. A makeshift sign planted in the marshy right bank signals the takeout. Sweeping right with our paddles, we head toward a pocket beach, where a narrow path leads off the water and into the trees. The late-day sun is casting diamonds on the river, bringing to mind a comment Bastasch made earlier. “You can get pretty glum about a lot of environmental things,” he said, “but the Willamette isn’t one of them.” More: Travel Planner