Chefs love them. Dogs dig them. But the greatest thing about Oregon truffles? They taste best right here at home 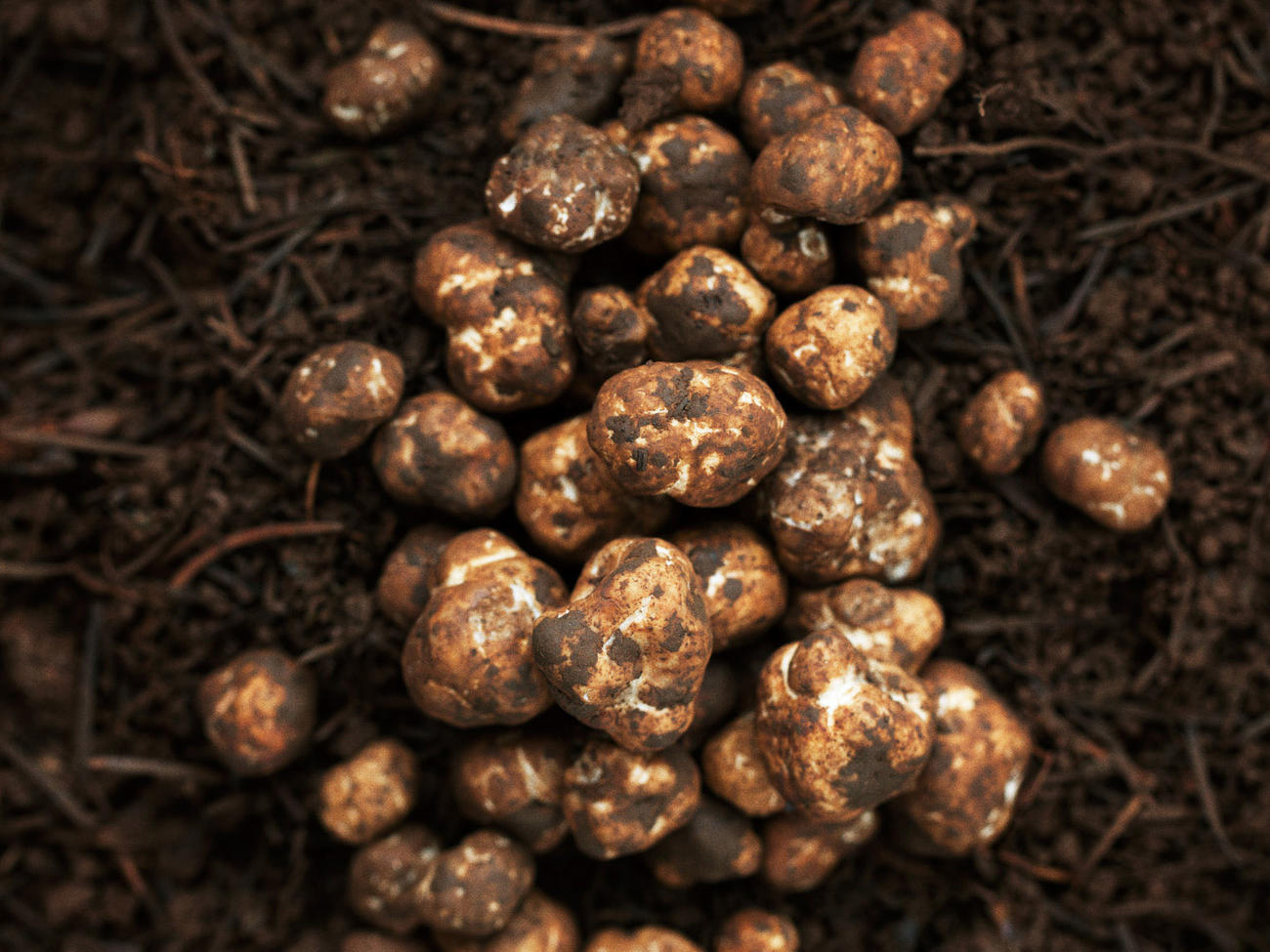 John Clark
Fresh from the earth, the coveted Oregon white truffle can fetch up to $400 a pound.
Written by Ted Katauskas December 12, 2012
Share this story

As a general rule, I try to stay away from lumpy brown objects fetched from the jaws of strange dogs. But when you’re in the heart of Oregon mushroom country, every mud-caked ball of earth could be a truffle treasure.

I’m standing at the edge of a dense fir forest in the Willamette Valley with 18 foot-stomping, hand-clapping gourmands and their pets—shepherds, poodles, a Chihuahua in a knit sweater. We’re huddled together on a chilly Saturday morning to learn how to hunt one of the state’s most prized culinary ingredients: the elusive Oregon truffle.

“Today we’re going after the Oregon white,” says Jim Sanford, a 6-foot-4 former elephant handler turned dog trainer and the leader of our expedition. Beside him, sitting at attention, is Tom, a 35-pound Lagotto Romagnolo with tight white and tan curls, a trained truffle hunter who in one season sniffed out 200 pounds of French Périgords, the second-most expensive mushroom in the world at around $900 a pound. “The only place we’ve ever hunted Oregon truffles is right here. Exactly this weekend every year.”

The last full week in January, to be precise, when Oregon truffles tend to reach their musky peak of perfection and hundreds of enthusiasts from around the world come to Eugene for the Oregon Truffle Festival—three days of unrestrained fungal madness that includes workshops, cooking demos, seminars, wine tastings, and elaborate multicourse dinners built around the mud-caked balls of earth that Tom and his pack of four-legged foragers hope to uncover.

We’re led down a drainage ditch, then into a stand of trees so thick it takes a minute for my eyes to adjust. The air is heavy with the scent of pine and peat and decaying earth. Most of the dogs do what any canine does when presented with a forest of unmarked trees, but the Lagottos, with Tom in the lead, follow some programmed instinct and begin sniffing in circles until they zero in on a specific tree, jam their noses into its base, and dig.

The Oregon white truffle (Tuber oregonense) grows symbiotically in the root systems of Douglas firs throughout the Northwest, from southern Oregon north to British Columbia, marching west from the Cascades to the Coast Range. It propagates naturally on timberland and prefers places where the sun rarely penetrates the canopy and the soil remains cool and moist much of the year. Places just like this.

I come across Bill Collins, a clinical psychologist who throws eight-course truffle-centric dinner parties for friends, leaning over his dog, Rico, a purebred Lagotto furiously excavating a hole until he finds his prize. Collins reaches down and pulls out a gumball-size nugget and hands it to me. The aroma clears my sinuses, as if I’m sniffing horseradish. I hand it back to him, and he inhales. “It’s really a hard scent to describe,” says Collins, stuffing the truffle into his satchel. “Almost like a pheromone.”

At their peak, Oregon white truffles release oils that bind with fats in meats and cheeses, and this complex cocktail of organic compounds is what imbues food with the truffle’s culinary magic. People pay as much as $400 a pound for that magic. But the window of ripeness lasts two weeks, tops. Plucked from the earth before or after those oils have been released, the truffle is practically worthless.

For years, foragers here raked the forest floor, unearthing both ripe and unripe truffles, the lesser of which flooded the market, giving Oregon truffles a bad rep with chefs and vendors. Now foragers are awakening to the European method, using Lagottos and other trained dogs to dig out the ripest, most intense truffles. The result: a region flush with truffle love.

In the past 40 hours, I’ve been treated to savory truffle panna cotta, truffle venison ravioli, white truffle–scented quinoa, Oregon black cod with truffle aioli, filet mignon infused with the essence of 60 pounds of truffles, and, for dessert, Hood River apples in a pool of black truffle apple brandy and dusted with white truffle snow.

“I think of the Oregon truffle as sort of a Cinderella story,” says Charles Lefevre, cofounder of the Oregon Truffle Festival, now in its eighth year. “It’s this gem that has not yet received its grand debut. Very few people recognize its value, because it’s rarely been seen in its full splendor.”

Tell that to the mob of people who took over the ballroom at the Hilton Eugene yesterday. I watched as a crowd rushed a purveyor of local truffles, the buyers sniffing glasses full of Oregon whites and the fruitier Oregon black truffles before coughing up big cash. At a booth staffed by waiters from Marché—a French bistro in Eugene where the previous night I’d feasted on black-and-white truffle tagliatelle, and black truffle–dusted duck liver mousse—there was a run on white truffle cheese puffs. Across from a chocolatier rolling Belgian chocolate truffles in Oregon black truffle–infused salt, a man hawked 5-ounce bottles of Oregon white truffle oil—the only domestic truffle oil in the country—for 30 bucks a pop.

I change out of my muddy boots and drive to Pfeiffer Winery, in Junction City, for a four-course truffle lunch billed by festival organizers as A Villa Afternoon. I’m greeted by vintners Robin and Danuta Pfeiffer, whose Mediterranean-style villa is perched on a hilltop nourishing a rich vein of Oregon whites. Robin entertains guests around a long table cluttered with plates and wine bottles, while Danuta banters in the kitchen with chef Maurizio Paparo.

Paparo, of Eugene’s Excelsior Inn & Ristorante, is a big fan of Oregon whites. He fixes me a plate of T. oregonense–infused lamb ragù, so tender it melts in my mouth, leaving behind a hint of earth that intensifies when the Pinot made from grapes born of the same ground runs over my tongue.

“It’s like falling in love once a year,” Danuta says, swirling a goblet of her namesake 2007 Pinot. “If you can find them, eat them. Smell them. Drink them. Love them. It’s an affair you can have year after year after year.”

MAKE IT A WEEKEND

Do. Splurge on Experience Three (The Culinarian) at the Oregon Truffle Festival ($750; Jan 25–27; oregontrufflefestival.com), a three-day immersion into the world of Oregon truffles, which includes a cooking class, a foraging excursion, and multicourse truffle-themed meals. Too much? The North American Truffling Society (natruffling.org) leads weekend forays for the public at no cost.

Stay. At the swanky new Inn at the 5th (from $159; innat5th.com), the staff totes iPads, and room service, provided by Marché, arrives as if by magic via a butler’s pass-through at your door. Or bed down in an old sorority house at the Excelsior Inn (from $99; excelsiorinn.com), where the owner, Maurizio Paparo, is also your personal chef.

Top 5 Foraging Experiences in the West