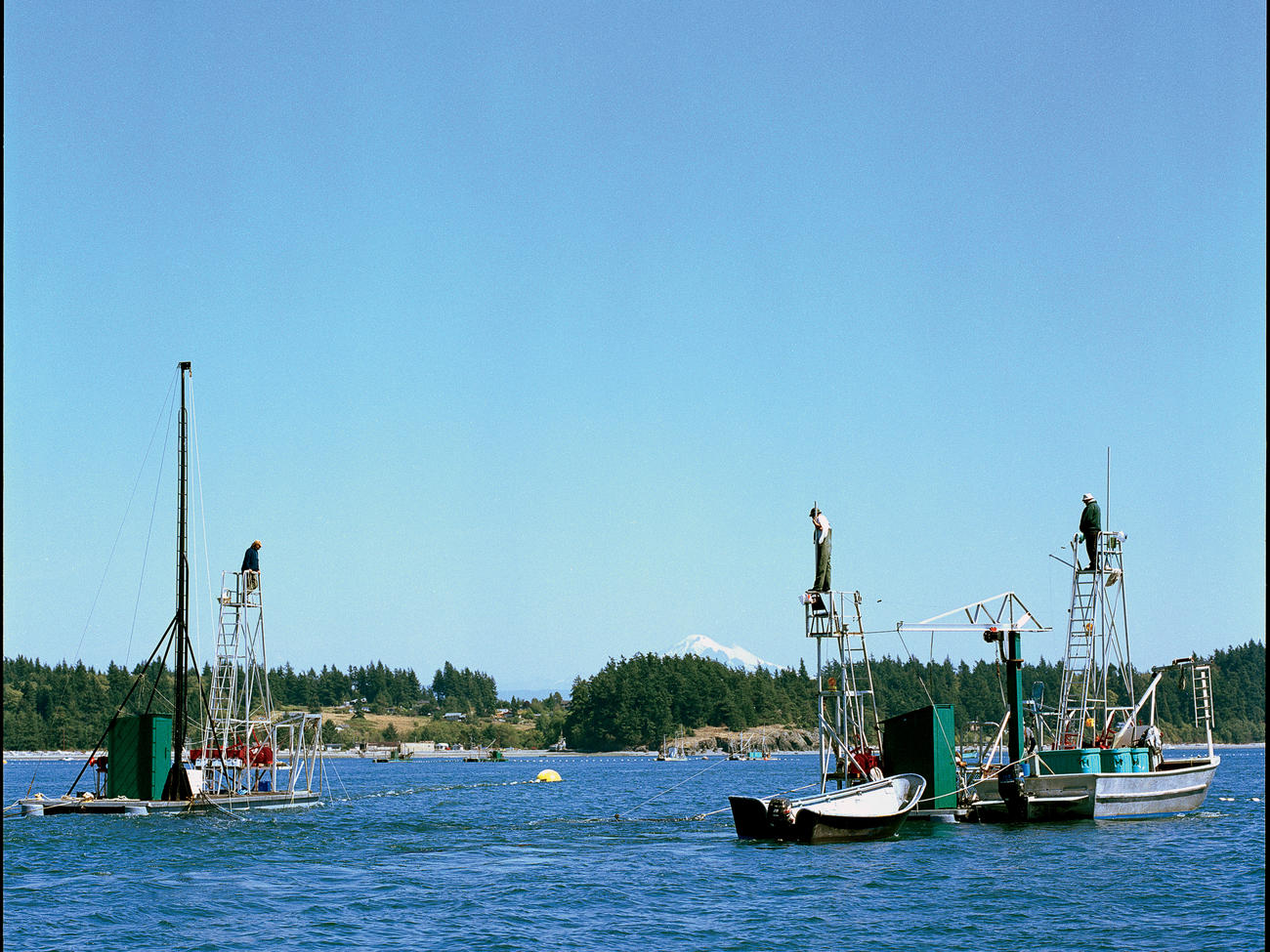 Jim Henkens
Reef-net fishermen await the next school of Fraser River salmon. This part of Puget Sound is the only place in the world where the ancient fishing technique is practiced.
Written by Amy Wolf, April 11, 2006
Share this story

May brings good things to Lummi Island, Washington. Orcas, for example, start migrating south through Puget Sound, providing a prime show for anyone who happens to be on the deck of the Willows Inn at just the right moment.

May is also the beginning of spot-prawn season and a busy time for Riley Starks, owner of the Willows Inn. Starks buys the giant red prawns locally and serves them on the inn’s deck every Sunday through August. It’s become an island tradition, feasting on spot prawns while trying to glimpse orca fins as the sun dips into the Pacific.

“I love cooking them live and head on, because that represents a peak taste experience, and that’s what I live for,” Starks says as he works the stove. “They’re so ephemeral, and they simply cannot be enjoyed that way except near where they are caught.”

One-of-a-kind taste experiences are the rule on Lummi Island, where organic is in, small farms thrive, and an unusual sustainable fishing practice is being revived. “In the summer, we have meals where everything but the salt, pepper, oil, and vinegar is grown on the island,” says Sharron Antholt, an artist who, with her husband, Chuck, grows lavender at Three Pheasants Farm.

“I used to think Pike Place Market was the most divine place,” Sharron says. “But now when I ask, ‘Chuck, when did you pick this?’ and he tells me, ‘This morning,’ I say, ‘Then I’m going to pick my own.’ “

Not far from the border with British Columbia, and about a two-hour drive (plus a 10-minute car-ferry ride) from Seattle, Lummi is not one of the more celebrated of the San Juan Islands. The rich and famous don’t have second homes here, and the island’s visitors sleep in only a handful of places. The main pastimes are visiting farms and art studios and tooling around the perimeter road on foot or by bike, taking in views of Puget Sound on one side and Mt. Baker on the other.

The main places to eat are the dining room at the Willows Inn, its Taproot Pub and Espresso Bar, and the Beach Store Café, all owned and run by Riley Starks and Judy Olsen.

“We’re trying to create a model of small-scale production, eating what you grow,” Starks says, referring to the organic produce and free-range chickens he and Olsen raise at their Nettles Farm. “People should be able to visit the place where their food is grown ― like our kitchen. We give tours of it all the time.”

Starks is a devotee of Slow Food, the movement to oppose fast food and promote local dining as a source of pleasure. That seems appropriate given the pace of life on the island. “It’s not a ‘doing’ kind of place,” Starks says. “It’s a ‘being’ kind of place.”

You feel this when you watch the clouds casting shadows on the water, or Lynn Dee gathering ferns and maple leaves from her garden to smoke for her raku pottery. (“My requirement is that everything that goes into the kiln be local,” she says.) You feel it at Windy Hill, Michael Oppenheimer’s outdoor sculpture garden filled with kinetic artworks, where a subtle breeze sends tall grasses blowing in waves, a field of tiny weather vanes changing direction, and a pipe chime ringing ― or maybe that’s a songbird.

Everywhere you turn, you meet residents talking about how quickly and easily they fell in love with the island. Oppenheimer still remembers his first visit 30 years ago, when he bought the farm that became Windy Hill. “There were blackberries everywhere, and everyone was eating salmon,” he says. “The ferryboat was tiny and so romantic. Everyone knew each other ― there was a sense of community.”

Starks, too, fell in love with the place despite himself, realizing how much the island felt like his childhood home in Everett, Washington. “I used to drive out on the freeway to a lumberyard, where I’d stop the car and say to my kids, ‘This is where I grew up. This is where I built forts, played games,’ ” Starks says. “And now it’s a lumber yard. Gone. This is the last best place for me ― it’s home.”

A feast to feel good about

Lummi Island was first a seasonal home to the Lummi Nation Native Americans, who now live year-round on a reservation across Hale Passage. Relations between more recent arrivals and the Lummi Nation have long been politically charged, which is why the success of last year’s first-ever Lummi Island Reefnet Festival is all the more remarkable.

“Reef-net fishing is one of these ancient practices that’s dwindling, and if we don’t keep it alive, it’ll disappear,” Starks says. The technique involves a net spread between two stationary bargelike boats, like a high-wire circus act on water. “Give ’em hell,” a watchtower man yells each time he spots a school of salmon, and suddenly a slithering mass of silver fins and tails flashes in midair before dropping into a holding well.

It’s far from efficient, but it’s the most eco-friendly way to fish ― all bycatch is released by hand ― and it yields far superior-tasting fish, devoid of the lactic acid released during commercial-fishing struggles. As a result, chefs such as John Sundstrom of Seattle’s Lark now have reef-net-caught salmon shipped directly from the waters off Lummi’s west coast ― the only place in the world where the ancient art is now practiced.

On the morning of the first reef-net festival, Lummi Nation elders blessed the salmon and the celebration. By midafternoon, nearly the entire Lummi Island population was feasting together on roasted corn and salad from the island’s farms, along with the world’s best wild salmon.

Starks plans to host the second annual festival this August, and once again it’ll be the ultimate expression of all that’s good about Lummi Island: unforgettable food that’s responsibly harvested, in a place that makes you want to slow down to taste, observe, and savor it all.