For an authentic taste of the West’s “it” cuisine, start your food adventure in L.A.’s Koreatown. Here’s where to go and what to try 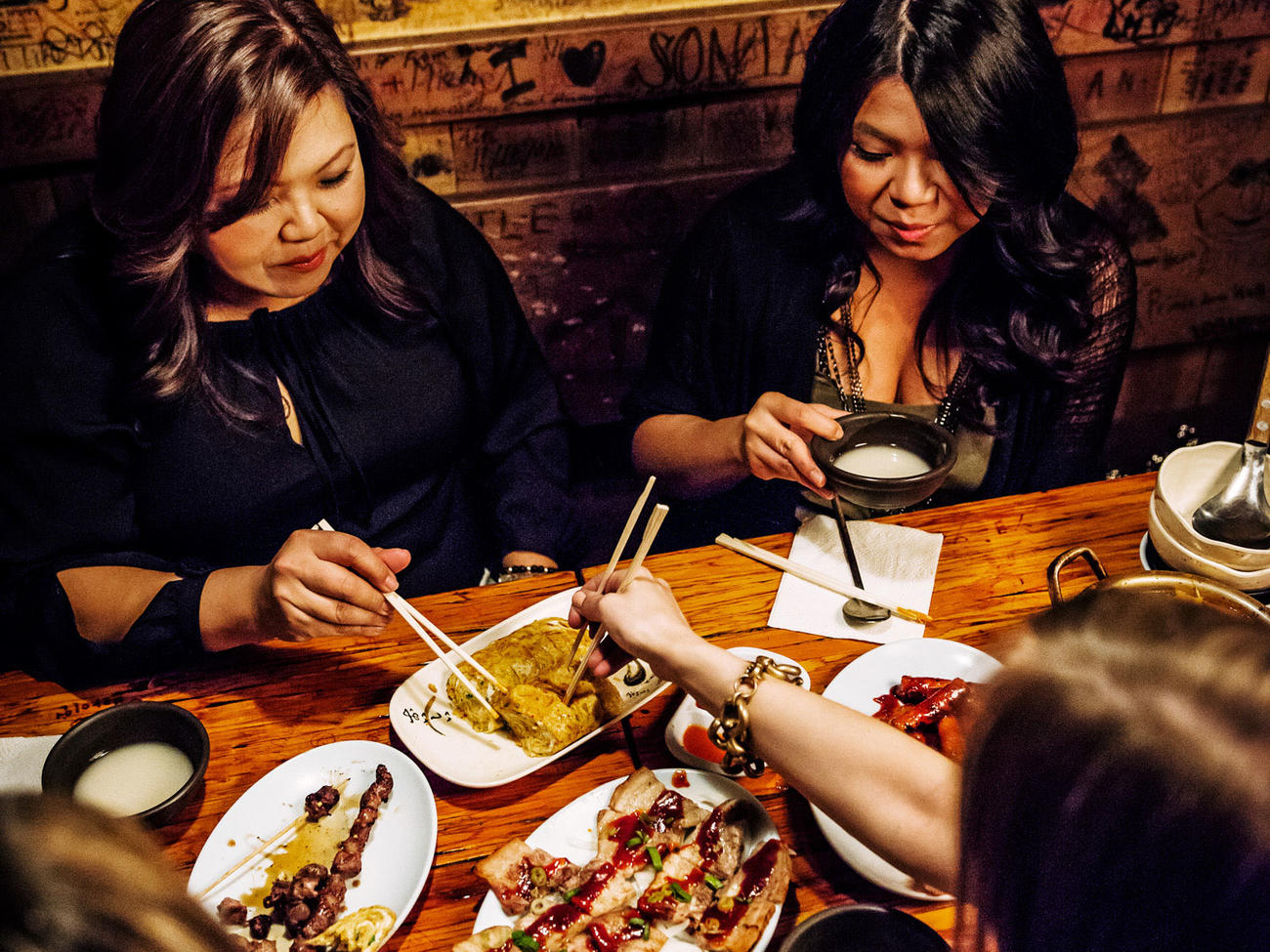 It’s girls’ night out in K-town. I’m wedged in at a tiny table in a buzzing pub called Dansungsa, looking up at photos of Marilyn Monroe and James Dean juxtaposed with Kim Jong-il. A hint of cigarette smoke hangs in the air here in this 3 square miles of no-man’s-land somewhere between America and Korea, just off Wilshire Boulevard. The decor is studied seaminess, the cheap plywood walls scrawled on by customers. Waiters glide through the shadows. Rock music pounds gently in the background, and the cloudy, effervescent makgeolli, a seductive fermented rice wine, goes down easy. Maybe a little too easy.

But that’s okay, because before I can finish, the first plate arrives. You don’t go to a pojangmacha, or restaurant/pub, in Koreatown just to drink. It’s just as much about the hansik, the food. Don’t get between Koreans and their food, Korean chef Debbie Lee tells me as she’s showing me her hood. Between sips of makgeolli, we’re munching on skewers of sweet and crispy pork belly, and grilled chicken gizzards marinated in mirin and soy sauce. But these are all a prelude to the spicy chicken wings—drumettes with crunchy honey-flavored skin. The scent of chile, garlic, and grilled meat is revving up my taste buds. And this is only the first stop, Debbie says. Eating Korean-style means making a night of different stops for different specialties—barbecue, tofu, noodles—like a progressive dinner.

Debbie Lee, a woman of explosive laughs and definite opinions, regales me with stories of her parents and grandparents, whose lives revolved around food even before they fled North Korea at the war’s outbreak many decades ago. Food broke the language barrier between Debbie and her grandmother. Her grandmother’s home cooking inspired her to become a chef—she has her own little Korean eatery called Ahn-Joo in the L.A. suburb of Glendale, and was a finalist on TV’s The Next Food Network Star.

Dave Lauridsen
A Koreatown mini-mall on the corner of Sixth St. and Kenmore Ave.

Peeling me away from the table would’ve required an act of courage if not for Debbie’s tales of pancakes: sweet rice pancakes—thin folds of dough, gently flavored with ground nuts, brown sugar, and honey—that she likes to get from a cart called Koo’s. As we search for the elusive cart, Debbie pulls over to show off her favorite dishes, navigating the turns in the neighborhood with the confidence of a Formula One driver. We sail across Sixth Street to Normandie Avenue, then head back over to Western Avenue, like Thelma and Louise hunting down sweet treats. We pass strip malls with noodle houses and snack shops, barbecue joints and coffee shops, all crowded with smartly dressed, hungry eaters, because Koreatown’s Saturday night fever is all about the food. Korean food is the “it” cuisine, and with Roy Choi’s Kogi BBQ spawning L.A.’s Korean taco addiction, and David Chang’s Momofuku empire exploding taste buds in New York City, its flavors are finally mainstream—even T.G.I. Friday’s is serving Korean steak tacos.

The L.A. metro area now has the largest Korean American population in the United States, with heavy emigration from South Korea in the 1960s, so it only makes sense that L.A.’s Koreatown is ground zero for the food. “Koreatown is literally Little Seoul,” Debbie says.

Dave Lauridsen
The Prince, with killer fried chicken and a moody atmosphere featured on Mad Men

“K-town has become the largest Korean community outside of Seoul, and the restaurant community here has tremendous influence on how the cuisine spreads globally. While David and Roy have introduced Korean flavors to non-Koreans, much of what they do is fusion. Here is where you’ll find true Korean dishes.”

About 20 years ago, when Debbie first started coming to K-town, it was mostly Koreans who ate in places like Elephant Snack Corner, where I try the best beef steamed dumplings I’ve ever had—bulging and pillowy.

That was back when K-town tilted more toward Latino businesses. Now, with more non-Koreans coming from the nearby University of Southern California, the Westside, and Hollywood, Debbie estimates that the Korean clientele at her favorite haunts has dropped to closer to 60 percent.

Dave Lauridsen
Spicy crab and banchan, or side dishes, at Park’s BBQ

Along the way while searching for the mythical pancakes, we eat. Seriously eat. At elegant ChoSun Galbee for its buttery short rib barbecue and cleanly acidic kimchi, at the Prince for spicy twice-fried chicken, and at popular Park’s BBQ for pork belly drenched in a soy sauce like smoky candy. Even if you tried a different Korean dish at each meal for a year, you still couldn’t scrape the surface—there are that many flavor nuances and ingredients. Spicy, smoky, sweet, acidic, peppery, citrusy: You can get the range of tastes in banchan, side dishes to eat while you wait for your main course and to use as condiments with rice. They can be everything from radish kimchi and cucumber pickles to seaweed salad, fried yellow corvina (local saltwater fish), and seafood rice pancakes. “The banchan alone are an overall representation of Korean cuisine,” Debbie says—a meal on their own.

On West Sixth, there’s a Korean-style hookah lounge across the street from fashionable Haus Dessert Boutique, where hipsters sit on the patio to sip red bean lattes and eat Korean-style (subtly sweet) pastries. Coffeehouses, Debbie says, are the new bars in K-town. Everywhere I turn, a restaurant or pojangmacha beckons. A lot of choices, but not what we’re looking for.

Toward the end of the night, Debbie swings into a parking lot where a cart is serving hotteok: pancakes! It’s not Koo’s, nowhere to be found, but Gook Hwa House. We stop the car, eager for our long-overdue fix. The pancake maker repeatedly flattens the cakes onto the griddle, the scent of caramelized honey and brown sugar reaching us as we drop our money into the blue plastic bin. Sweet, molten, delicious. He also makes gook hwa bhang, flower-shaped “chrysanthemum bread” filled with vanilla custard or sweetened red beans. Now Debbie has a new favorite. And I’ve learned how to eat like a Korean. Dusting the crumbs from our laps, we consider calling it a night. But maybe after just one more stop.

THE BEST KOREAN IN THE WEST