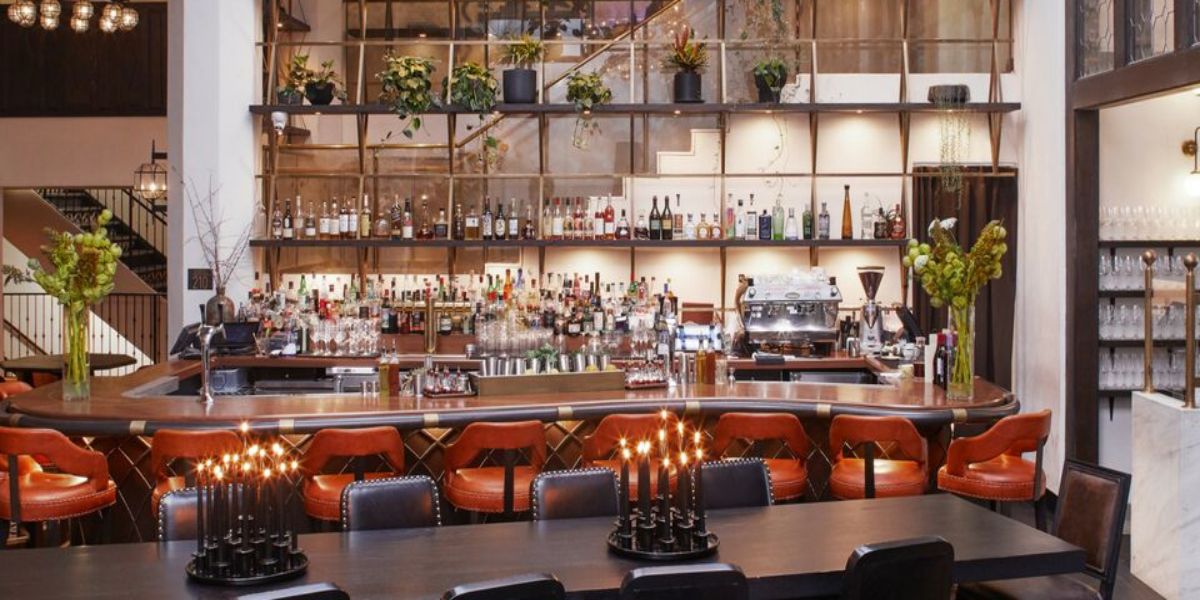 Call us sentimental, but we love a good makeover, especially one as iconic as the Hotel Figueroa’s. The 92-year-old edifice in DTLA has rich roots in progressivism: it originally housed a YWCA women’s hostel and at its ground breaking ceremony in 1926, it was a revolutionary structure of its day as the largest-ever female-led project in the nation. Almost a century later, Hotel Fig bears much of the same gusto, collaborative spirit, and signature Spanish Colonial architecture as the inspiring space it was designed as, but with a few welcome upgrades.

If you walked into the lobby a few years ago, you might have felt as though you’d stepped off South Figueroa Street and onto a Hollywood film set, what with the decadent Moroccan-inspired interiors: the intricately hand-painted details on the golden walls, the heavy wooden furniture fit for a prince, and the hanging Moorish lanterns casting shadows across the tiled floors. Fast-forward more than two years, several million dollars, and a complete gutting of all 14 floors later, and you’d hardly recognize the place. There’s still the striking Spanish Colonial architecture, the columned lobby and its soaring, wood-beamed ceilings, but now it bears a slightly more sophisticated, California-cool vibe, with contemporary furnishings and tasteful nods to its evolving past woven thoughtfully throughout.

“Today you’re seeing and feeling what the hotel was when it opened, as opposed to what it evolved into,” explains the Hotel Figueroa’s current owner, Bradley Hall. “It really became a passion project when we realized we’re stewards of this place, and we wanted to proceed with what its spirit has always been about.”

The revamp is, in large part, thanks to Santa Monica’s Studio Collective, the innovative team behind some of the West’s most striking interiors, like Fish House at the Four Seasons Oahu and The Goodland in Santa Barbara. Working with the hotel’s already striking elements, the team delved deep into the building’s rich legacy (going so far as to hire a Los Angeles historian) to bring touches of decades past into the property’s present. Rockefeller Kempel Architects did a number on reinventing the original floor plan (and expanding the guestrooms), while Studio Collective went to work bringing the space into more modern times, with splashy art and modern furnishings that play on the strong feminine and creative spirit that have inspired Hotel Figueroa since day one.

The space has long been a haven not just for international travelers, but also for musical performances, art exhibitions (like the 1933 “Women Painters of the West”), and progressive lectures on social issues like sexism and racism. Post-renovation, there are subtle nods to femininity and social change in the art that fills the walls, nooks, and crannies of the hotel,. There’s the the commissioned portrait (byAlison Van Pelt) of Maude Bouldin—the fearless, motorcycle-riding aviatrix and first managing director of the YWCA hostel in the 1920s—that welcomes guests at check-in, and the eccentric collection of artwork, created largely by local female artists, found in the plentiful public spaces and in the contemporary-luxe guest rooms.

“The art collection for the hotel—the primary art made by L.A.-based female artists, the artwork from our current artist-in-residence, the paintings from artists all over California that you’ll find in every guest room, and the hand-painted elevator doors on each floor—are all nods to the purpose behind the hotel’s beginning,” says Hall.

Tempted though you may be to sink into one of the lobby’s upholstered settees and admire the quirky, detail-driven surroundings, or to settle in for a drink at the grand Bar Figueroa for a house favorite Gin & Tonic, the back terrace beckons with a super-Instagrammable muraled wall (done by UK-based designer Bella Gomez), and an arguably even more picturesque DTLA backdrop. Here, a coffin-shaped pool awaits amidst plush daybeds, while the dreamy poolside restaurant, Veranda, serves up summery low-ABV cocktails and a menu of Mediterranean-inspired light fare like yellowtail crudo and wood-fired flatbreads. On Sundays, in-the-know Angelenos come for the DJed pool parties, and on any other day of the week, for agave-driven cocktails at Rick’s, the newly constructed two-story bar that feels like a chic Oaxacan-inspired poolhouse.

Overnight guest or not, the food and beverage program at the Hotel Figueroa is a draw in its own right, led by James Beard Award-nominated Chef Casey Lane and cocktail legend Dushan Zaric (of NYC’s Employees Only). This fall brings even more excuses for a visit, given the recent addition of a dim sum-style pintxos cart from the hotel’s decadent Basque-Mediterranean eatery, Breva, which will be rolling out bites like jamon serrano croquettes each evening, along with the highly-anticipated opening of the swanky, reservations-only cocktail haven, Bar Alta, this December.