Here’s your to-do list for Oahu, whether you have just a day or a whole long weekend to play with 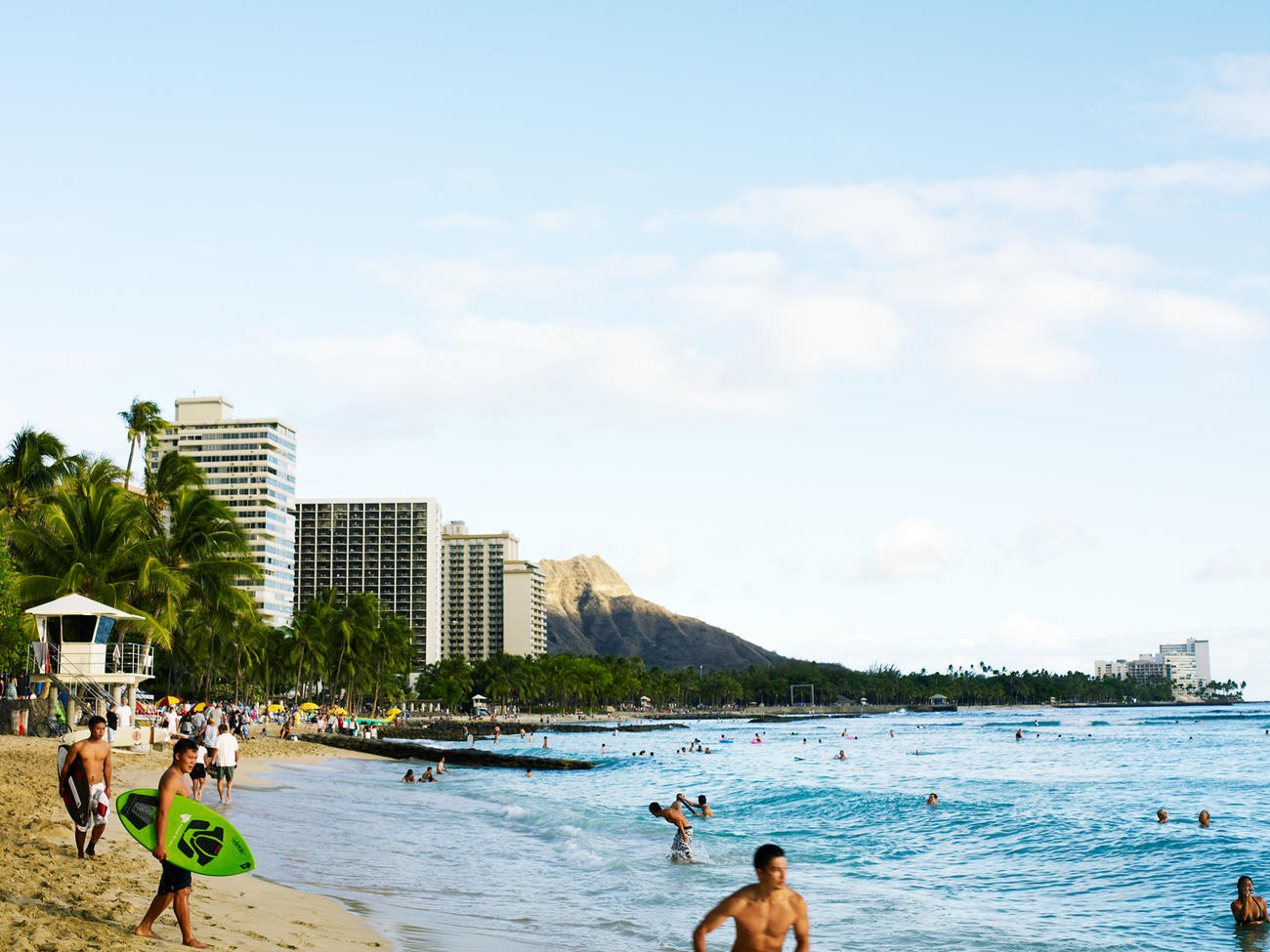 Plate-lunch pork adobo or farm-to-table organic greens, family-friendly resorts or get-away-from-it-all B&Bs, learning to surf or exploring Polynesian artifacts—Hawaii’s most-populous, and most-taken-for-granted, island has it all.

Where to Eat and Drink

Lanikai Juice. Kailuans love Lanikai Juice, where the smoothies are made with local papaya, passion fruit, and pineapple. Get yours in a bowl with granola and bananna on top, and you’ve got a breakfast that will keep you going all morning. $; 600 Kailua Rd., Kailua; www.lanikaijuice.com.

Sweet Home Waimanalo. The mixed greens in your FarmRoof Super Salad, with raw-coconut vinegar and macadamia-nut oil dressing, come from the organic rooftop garden at this cafe housed in an old gas station. The hibiscus-mint lemonade is aromatic and refreshing, and don’t be afraid of the kale smoothie; it has pineapple, banana, and honey to temper the wholesomeness. $; 41-1025 Kalanianaole Hwy., Waimanalo; sweethomewaimanalo.com.

He‘eia Kea Pier General Store & Deli. This cheap lunch at a fish pier just might be the best thing you’ve ever eaten off of a paper plate. Chef Mark “Gooch” Noguchi, who had worked at Town, prepares mouthwatering locally sourced plate-lunch dishes like guava chicken and adobo pork, as well as Kuahiwi Ranch beef burgers and an occasional fish of the day. Order at the cash register, pick up at the window, and … mmm. $; 46-449 Kamehameha Hwy., Kaneohe; www.heeiapier.com.

Opal Thai. Head to Hale‘iwa and Opal Thai, whose Bangkok-born owner serves the island’s finest Thai. Don’t be surprised if you don’t get a menu, though—the staff will often instead talk you through your order, deciding on the fly what to bring you based on your taste preferences. $; 66-460 Kamehameha Hwy., Haleiwa; www.facebook.com/pages/Opal-Thai-Food.

Uncle’s Fish Market & Grill. Why put a tiki-motif seafood restaurant in an industrial neighborhood? Because it’s less than a minute’s walk to the Honolulu Fish Auction, where Uncle’s gets its ahi, opah, mahimahi, and whatever else is fresh, six days a week. The best part is what they don’t do: oversauce or overcook. Here, the fish is the star. $$$; 1135 N. Nimitz Hwy., Honolulu; www.unclesfishmarket.com.

Helena’s Hawaiian Food. Hawaii wasn’t yet a state when the late Helen Chock opened her doors. Over 60 years, U.S. statehood, and a James Beard Foundation award later, her colorful cafe is run by her grandson, but tourists and locals alike still vie for one of the 12 tables to feast on traditional Hawaiian dishes like poi, poke, kalua pig, and luau chicken. $$; 1240 N. School St., Honolulu; helenashawaiianfood.com.

The Royal Hawaiian’s Azure Restaurant. It’s not inexpensive, but for ocean lovers, Azure offers both a beachside setting and some of the best seafood in Hawaii. Splurge on the Kona shellfish bowl, featuring the expected (clams, scallops) and the untraditional (abalone) spiced with kaffir lime and chiles. $$$$; 2259 Kalakaua Ave., Honolulu; www.royal-hawaiian.com/dining/azure/.

Hilton Hawaiian Village. For water-sports lovers, the Hilton appeals for its spot on Waikiki’s less crowded west end and its access to Duke Kahanamoku Lagoon and Beach. In an area known for its high-rises honeycombed with cookie-cutter rooms, this is one of the few true resorts in Waikiki. $$$; 2005 Kalia Rd., Honolulu; hiltonhawaiianvillage.com.

Papaya Paradise. Two quiet, simply furnished rooms with private entrances and baths share a large covered lanai and pool (with view of Mt. Olomana) in this licensed B&B a few blocks from Kailua Beach. The property has WI-FI for guest use, so it isn’t the kind of place where you have to drop off the grid entirely. (Though you certainly can if you want to.) $; 395 Auwinala Rd., Kailua; windward-oahu.com/papaya/papaya.htm.

Sheraton Waikiki. Maybe you think you’re not a Waikiki person. Maybe you think you prefer something a bit more secluded and exclusive. But consider this: With its warm water, dependably gentle waves, and novice-nurturing surf schools, Waikiki Beach remains the most forgiving place in the world to learn to surf or steer an outrigger canoe. The Sheraton Waikiki stands midway along the 2-mile-long beach, and while its high-rise architecture shouts 1970s, a $187 million renovation has given it 21st-century polish. $$$$; 2255 Kalakaua Ave., Honolulu; www.sheraton-waikiki.com.

Creative Commons photo by Anthony Quintano is licensed under CC BY 2.0

Ohana Waikiki East. If you’re willing to walk a couple of blocks to the beach, you can save big bucks at the 441-room Ohana Waikiki East high-rise hotel—or either of its sister hotels, the Waikiki Malia or Waikiki West. Here’s the deal: You get a no-frills room (ask for an upper floor to cut down on street noise) and a pass to the trolley that endlessly circles Waikiki. $$; 150 Kaiulani Ave., Honolulu; ohanahotels.com.

Shangri-La. Don’t miss the marble bathroom in the Mughal Suite, in Doris Duke’s Honolulu mansion, now a center for Islamic arts and cultures. In 2014, the suite—which was built in the late 1930s and includes Duke’s own bedroom and her dressing room—was finally opened to visitors. (Tours are by reservation only.) $$; 4055 Papu Circle, Honolulu; shangrilahawaii.org.

Diamond Head State Monument. This ancient volcanic crater overlooking Waikiki has starred in America’s tropical fantasies for generations. Which is what makes the short (0.08 mile) hike to its rim such a fulfilling experience. At its start the trail is anything but impressive, meandering through dry brush. But you climb, gradually then steeply, entering a narrow tunnel blasted through dark brown rock to arrive at the crater’s summit and the incomparable view: all of Honolulu and seemingly the entire Pacific Ocean sweeping half the globe. $; 4182 Diamond Head Rd., Honolulu; hawaiistateparks.org.

Bernice Pauahi Bishop Museum. Even before its recent renovation, the museum’s grand gray Hawaiian Hall (built from native volcanic rock) housed the greatest collection of Hawaiian and Polynesian artwork and artifacts in the world. Now it’s been brought into the 21st century with striking exhibits devoted to Hawaiian culture and history from ancient Hawaii to today. You can’t say you’ve seen Hawaii unless you’ve seen the Bishop. We mean it. $; 1525 Bernice St., Honolulu; bishopmuseum.org.

Kailua Beach Park. The calm surf at Kailua Beach Park is made for kayaking and stand-up paddleboarding. You can rent gear at Kailua Sailboards & Kayaks and at Twogood Kayaks Hawaii. $; 450 Kawailoa Rd., Kailua; honolulu.gov/parks.

Island Snow. Cool down with shave-ice at Island Snow, just a five-minute walk from Kailua Beach Park. Come for the cool treats, stay for the surfing accessories like board shorts and sunglasses. Bonus: A certain U.S. president has been known to stop by with his family. $; 130 Kailua Rd., Kailua; www.islandsnow.com.

Kapiolani Community College Farmers’ Market. The scene: As if Hawaii weren’t utopian enough, a stroll through the KCC market, at the base of the Diamond Head crater, makes you want to move to Oahu immediately. Arrive early, like 7:30 a.m. early, before the mobs. The find: Impossible to choose just one, with so many when-in-Hawaii products: Kukui’s Portuguese sausage; just-caught, grilled-to-order Kona abalone; and swaths of subtropical fruit, including fresh, silky litchi, juicy pineapple guavas, and super-sweet sugar pineapples. $; 4303 Diamond Head Rd, Honolulu; hfbf.org.

FarmLovers Kaka’ako Farmers Market. The Kapi‘olani Community College market has become mosh-pit popular. But the new, smaller market on the Ala Moana mall parking deck on Saturdays has some of the same vendors, like Ma‘o Organic Farms and Naked Cow Dairy fresh-churned butter, as well as flowers to brighten your condo. $; 1050 Ala Moana Blvd., Honolulu; www.facebook.com/kakaakofarmersmarket.

Lin’s Lei Shop. You just can’t leave Oahu without acquiring a lei, and this shop in Chinatown is a locals’ favorite. $; 1017-A Maunakea St.; www.linsleishop.com.

How to Plan a Family Trip to Hawaii