Eating Up the West Coast: A little Hitch

Brigit Binns, author of Sunset's "Eating Up the West Coast" cookbook, shares her experiences in Bodega, CA, a town obsessed with Hitchcock. 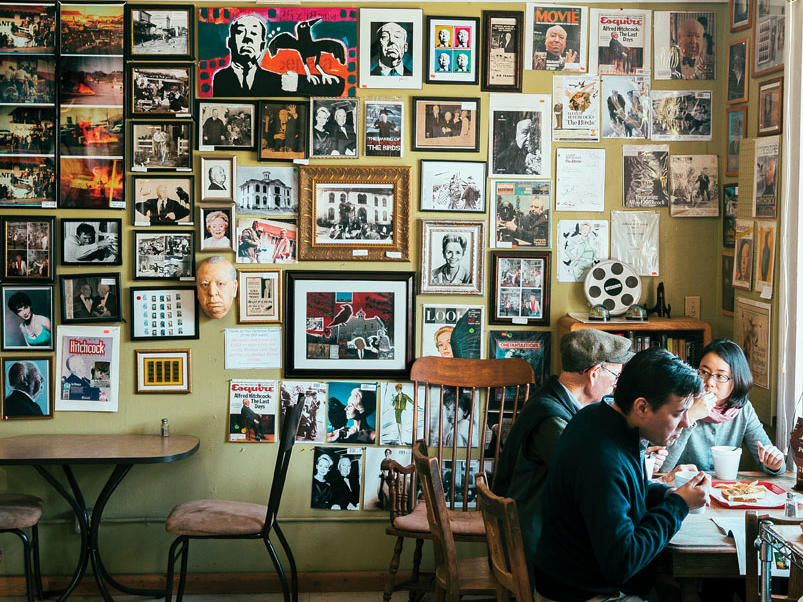 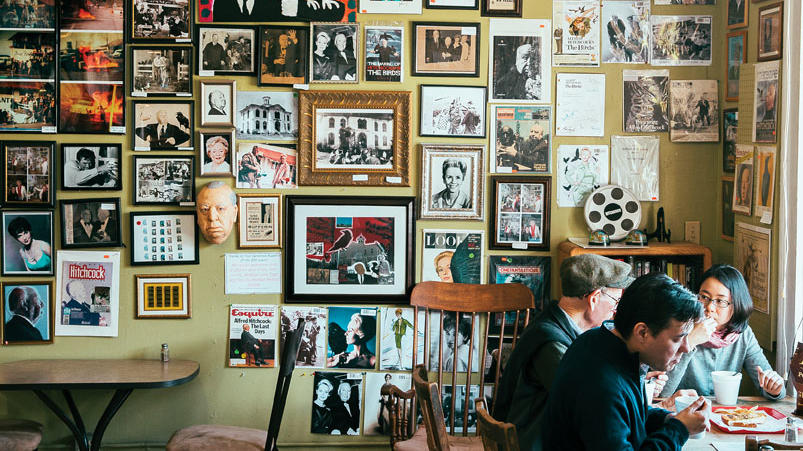 Brigit Binns is the author of Eating Up the West Coast, an adventure-packed road-trip cookbook that she wrote for Sunset. Here, in her second in a series of guest posts, Brigit shares her visit to a Sonoma County town that Hitchcock fans flock to.

Traveling alone is a great way to meet people, if you’re open to it. But in the block-long town of Bodega, California, you’ve gotta watch out for the posers.

Because Alfred Hitchcock filmed the still-disturbing film The Birds here, the whole town is a peon to him. In the Bodega Country Store, the contents of the refrigerated case (“Home-Made Arugola Pesto!” “Wild Mushroom Baguettes!” “Fresh Burrata cheese!”) stands in direct contradiction to the non-perishable merchandise, which takes kitsch to a level unseen in California for a generation. With the largest collection of Hitchcock memorabilia anywhere, the BCS is Ground Zero for this small town’s obsession with Hitch. Out front is a life-size, 3-D figure of Hitch himself, glowering jowlishly. Many people come to this hamlet just to pose next to it. Then they stay for the Crab Mac n’ Cheese.

Clearly, the big guy with the ubiquitous (and chinless) profile put this tiny place on the map. Nearby Bodega Bay offered more locations during the actual shooting, but all have since burned down or gone the way of all driftwood. Smaller, further inland from the sea—and, IMHO, far quirkier—Bodega offers more recognizable vistas, especially the Potter Schoolhouse, from which the children fled in terror (now a private residence), and St. Teresa church, where they sought and found sanctuary. It’s now a very popular spot for weddings, should you be so inclined (feathered headwear for the bride is optional).

In recent years, we’ve learned that Tippi Hedren had far more trouble with her director than with the avian population, but no one in Bodega cares about the Svengalian side of Hitch. They prefer to dress up as Tippi (a green dress is de rigueur) and pose with the above-mentioned larger-than-life-size figure. There were even several All-Tippi parades surrounding the 50th anniversary of the movie’s 1963 release, in 2013. (One can only hope for more.)

This area is, actually, also a great haven for bird-watchers (as opposed to The Birds-watchers). Because of its location on five different migration routes, the Audubon Society ranks it as one of the U.S.A.’s top locations for bird-watching. Unlike in the film, no crows are in evidence; they’re mostly gulls, with yellow-rumped warblers, grebes, and loons—and only an occasional raven—flying back-up. Evidently the bird handlers from Hollywood had to source their darkly threatening crows from a dump.

Would I have my picture taken with Hitch, as is the custom? I ain’t tellin’. (Wait—just let me grab my green dress and firm-hold hair spray.) Right about now seems a good time to cue up this classic blood-curdler on your fave device and give in to the urge to run around screaming and waving your hands in the air. Be sure to close all the windows; you never know when something winged is going to worm its way in.