Last April, six people entered a windowless geodesic dome (pictured above) on Mauna Loa, on Hawaii’s Big Island, where they lived until mid-August, leaving the structure only occasionally to walk around the volcano in spacesuits. 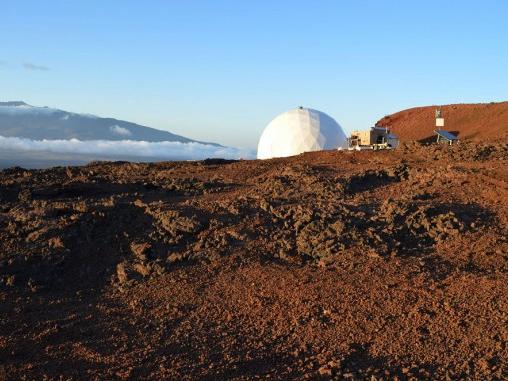 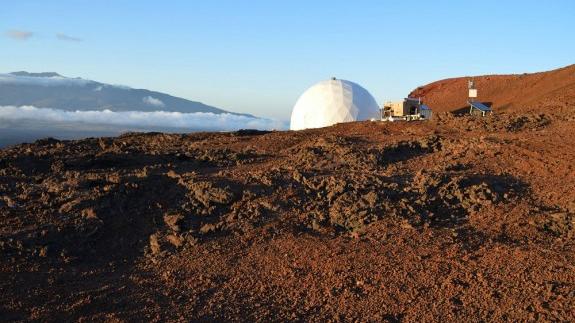 Last April, six people entered a windowless geodesic dome (pictured above) on Mauna Loa, on Hawaii’s Big Island, where they lived until mid-August, leaving the structure only occasionally to walk around the volcano in spacesuits. About 8,000 feet below, the surf rolled and people drank umbrella-topped drinks on planet Earth. Up on Mauna Loa, though, the six inhabited Mars, on a mission named Hawaii Space Exploration and Simulation, or HI-SEAS.

The six, who’d all passed tests qualifying them as astronaut material, were there to study menu fatigue. Eating is apparently often the last thing on an astronaut’s mind. Admittedly, the food on spaceships wins no James Beard awards, though it is, shall we say, light-years away from the tubes, pouches, and cubes of food NASA once provided its space travelers. For reasons not entirely understood, astronauts spending weeks and months in space tend to lose interest in eating. To study why that is, researchers at Cornell and the University of Hawaii proposed the HI-SEAS project, which NASA funded: Crew members were to alternate two days of instant meals with two days of meals they created from a pantry of nonperishable ingredients. 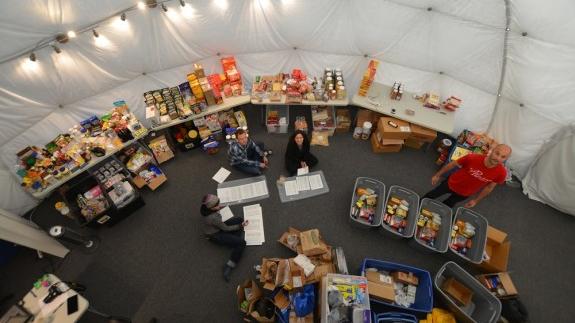 The crew taking a food inventory.

The researchers assembling the crew weren’t looking for expertise in the kitchen. Kate Greene, a science and technology writer who participated, says of the crew, all of them scientists and mathematicians, “There was a huge range of cooking experience. One crew member had a specialty he called Pepsi bread that he’d invented in college—he’d pour Pepsi on a piece of bread and put it in the microwave, caramelizing the sugar. He was really proud of that. The range went all the way to a crew member who made cooking videos and posted them on her website.” 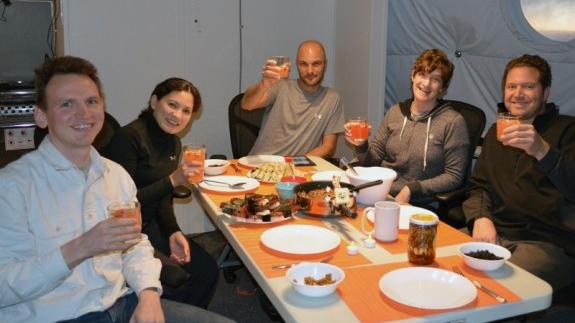 Technology and science writer Kate Greene is second from the right.

The team scrupulously monitored their intake and output. Greene says, “We tracked all the calories in, keeping food logs—writing down what we ate and also weighing food items—and taking video of food as it was put on plates and bowls. We tracked the food going out using BodyMedia armbands that estimated caloric output.”

The information hasn’t been analyzed yet, but here’s a data point: Spam fried rice was a crew favorite. Tortillas were also popular. Tortilla culture all but defines NASA’s culinary repertoire: Houston isn’t far from the Mexican border, after all, and when you’re floating above Earth in a weightless space station, corralling fixings in a tortilla is a lot easier than containing them between bread slices. Greene says her brightest gastronomic lightbulb was probably tortilla pizza rolls… and then she mentions a dish called enchilasagne. If you’re beginning to feel some menu fatigue yourself, cut the crew some slack—all ingredients on a voyage to Mars have to be shelf-stable, so any pork barbecue or fresh pineapple remained in the town of Hilo, 40 miles and another planet away.

Little things count, though, for a crew largely confined to a 1,600-square-foot dome. Greene says, “Your brain gets used to your environment, and you start to tune out a lot of stuff. The more similar the environment is day to day, the more stuff gets tuned out. I found that little, unexpected things people said or did produced inordinate amounts of joy in me—if somebody made a meal that was outside the bounds of what they normally cooked, it was exceptional. In an isolated environment, it can blow you away.”

The big question is, of course, when are we actually going to the Red Planet? NASA has no definite timeline, though plenty of would-be solar-system voyagers—some more serious than others—offer up predictions. Greene calls it a chicken-and-egg problem: NASA finds it impractical to develop the capability for travel to Mars without a flight on the schedule—but how can a flight date be set if the technology hasn’t been resolved? Recently, Dennis Tito—a wealthy entrepreneur and space tourist who lives in Santa Monica—announced his plans to send two astronauts on a Mars flyby in 2018. And in the past year, various simulated missions have kept the dream alive in austere Martian landscapes in the Canadian Arctic, Utah, Russia, and elsewhere. Attention, Trekkies: applications being accepted through Sep 15 for the Utah mission organized by the Mars Society.

For the Spam fried rice recipe, go to HI-SEAS.