An introduction to Canada's stunning national parks, plus when to go and how to get there 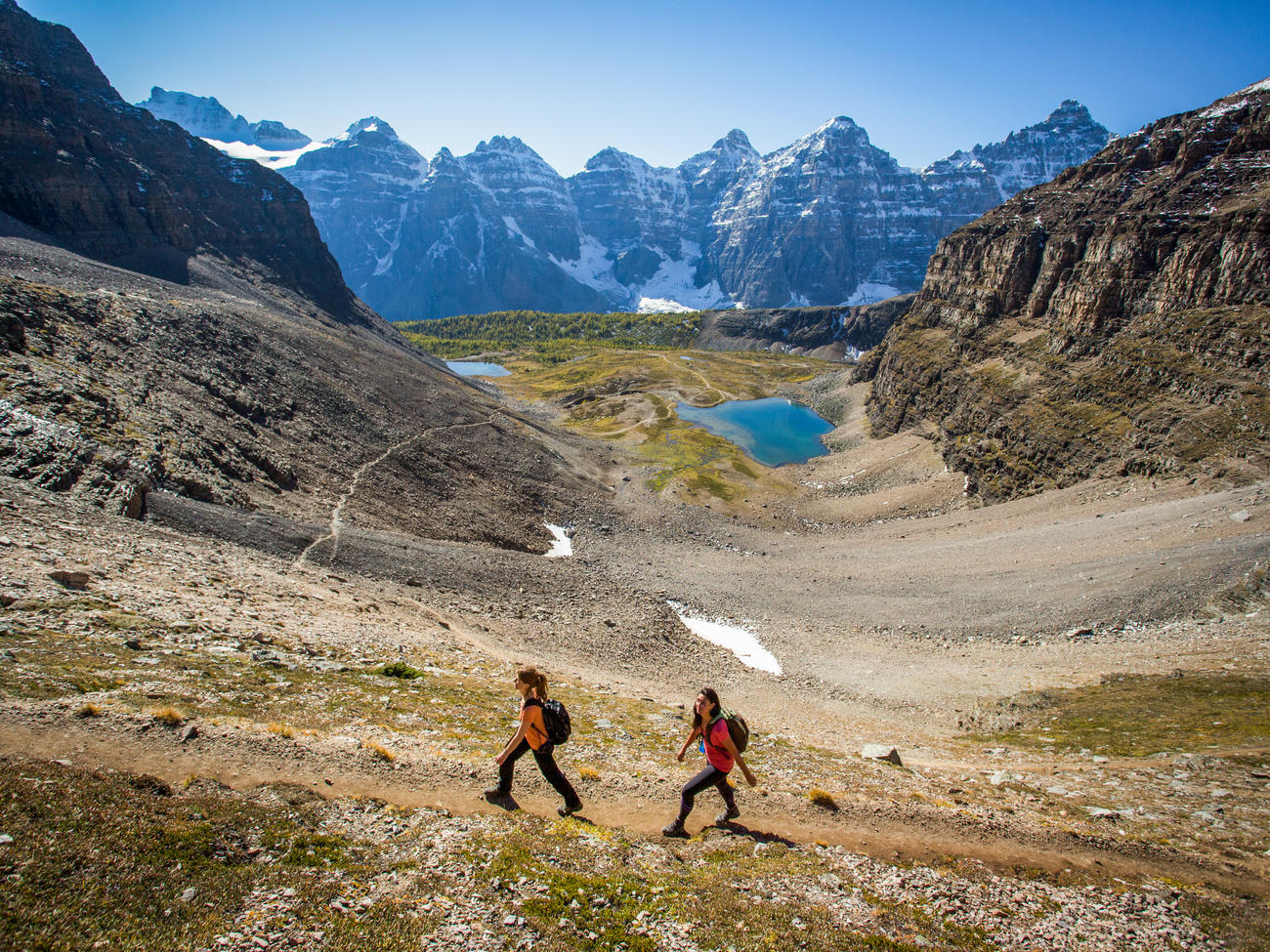 Jagged peaks and snowy summits sparkling in the sun, hidden alpine lakes with dazzling azure waters, boundless forests, glittering glaciers, iconic wildlife like grizzly bears and elk, geothermal pools to warm you to the core. Plus world-class dining, a thriving cultural scene and places to sleep as diverse as a nylon tent in a mountain meadow to opulent fireplace-equipped cabins and suites: welcome to Banff  and Jasper National Parks, the crown jewels of the Canadian Rockies.

Part of a contiguous network of parkland that forms a UNESCO World Heritage Site that’s larger than the state of Pennsylvania, Banff and Jasper hug the Canadian province of Alberta’s western boundary.

For millennia, indigenous groups like the Iyarhe Nakoda ventured here to hunt big game like caribou and bison. The arrival of Europeans in the early 19th century led to the establishment of fur trading posts and logging camps before rapid development began after 1875, eight years after Canada gained its independence, when construction commenced on a transcontinental railroad between eastern Canada and the Pacific. That development mostly centered around three settlements—Banff, Lake Louise, and Jasper—with railway companies building opulent hotels for privileged passengers journeying across this new nation.

In 1885, Banff, which encompasses Lake Louise, became Canada’s first national park. Jasper followed suit in 1907. Today, surrounded by pristine mountain wilderness, those three original tourism outposts have transformed into bustling resort towns where visitors from across the globe base themselves to explore this majestic 4.3-million-acre swath of parkland.

If you want to enjoy good weather while beating the throngs, June and Labor Day through early October are the best times to visit the parks.

With long, sunny days, July and August bring big crowds, so be sure to make your lodging reservations in advance if traveling then. When things get really hectic in the summer, you’ll also be forced to use off-site parking lots and take free shuttle buses to see the parks’ most iconic sites.

The parks become significantly quieter after Labor Day, and with spectacular fall colors emerging between late September and early October, when seasonal attractions and campgrounds start closing for the year, this can be an incredibly rewarding time to visit—just bring warm clothes!

By the beginning of December, the parks’ ski resorts are in full swing. Winter warriors can generally keep skiing, snowshoeing, and dogsledding until late April.

Spring often comes late to the parks, and snow can still cover alpine trails until late May, when seasonal campgrounds and activities start opening for the year. The parks get most of their rain between then and the end of June, but smaller crowds and lots of wildlife-spotting opportunities means this can be a great time to visit.

If you’re keen on outdoor activities, November and May should probably be avoided.

How to Get There

Most visitors start and end their trips in Calgary, which is 90 miles east of the Banff townsite and has regular flights from major U.S. cities, like San Francisco. You can also access the parks from Edmonton, which is 240 miles east of the town of Jasper. Both cities’ airports have plenty of rental car options. For longer trips, consider starting in Calgary and ending in Edmonton, or vice versa.

While driving is by far the best way to get to and see the parks, it’s also possible to visit them without your own wheels. Banff Airporter and Brewster Transportation and Tours offer shuttle services from Calgary’s airport to Banff, while Greyhound provides bus service from Calgary’s downtown. If starting in Edmonton, Sundog Transportation and Tours has a shuttle from the airport to Jasper, or you can take a Greyhound bus or VIA Rail train from downtown.

Once in the parks, Brewster Transportation and Tours and Sundog Transportation and Tours provide regular shuttle service between the towns of Jasper and Banff, with several stops en route, such as Lake Louise. The towns of Banff and Lake Louise also have bus and shuttle networks that can get you to many—though not all—landmarks, trailheads, and campgrounds. Jasper, however, does not have a public transportation system, though like all three towns, it does have taxis.  If relying on buses and shuttles, keep in mind that there can be less availability outside of the June through September high season.

Where to Stay & Dine in Banff & Jasper National Parks