Everyone from Buddhist monks to pop stars has come to Tassajara for spiritual enlightenment. Now people come to unplug and recharge 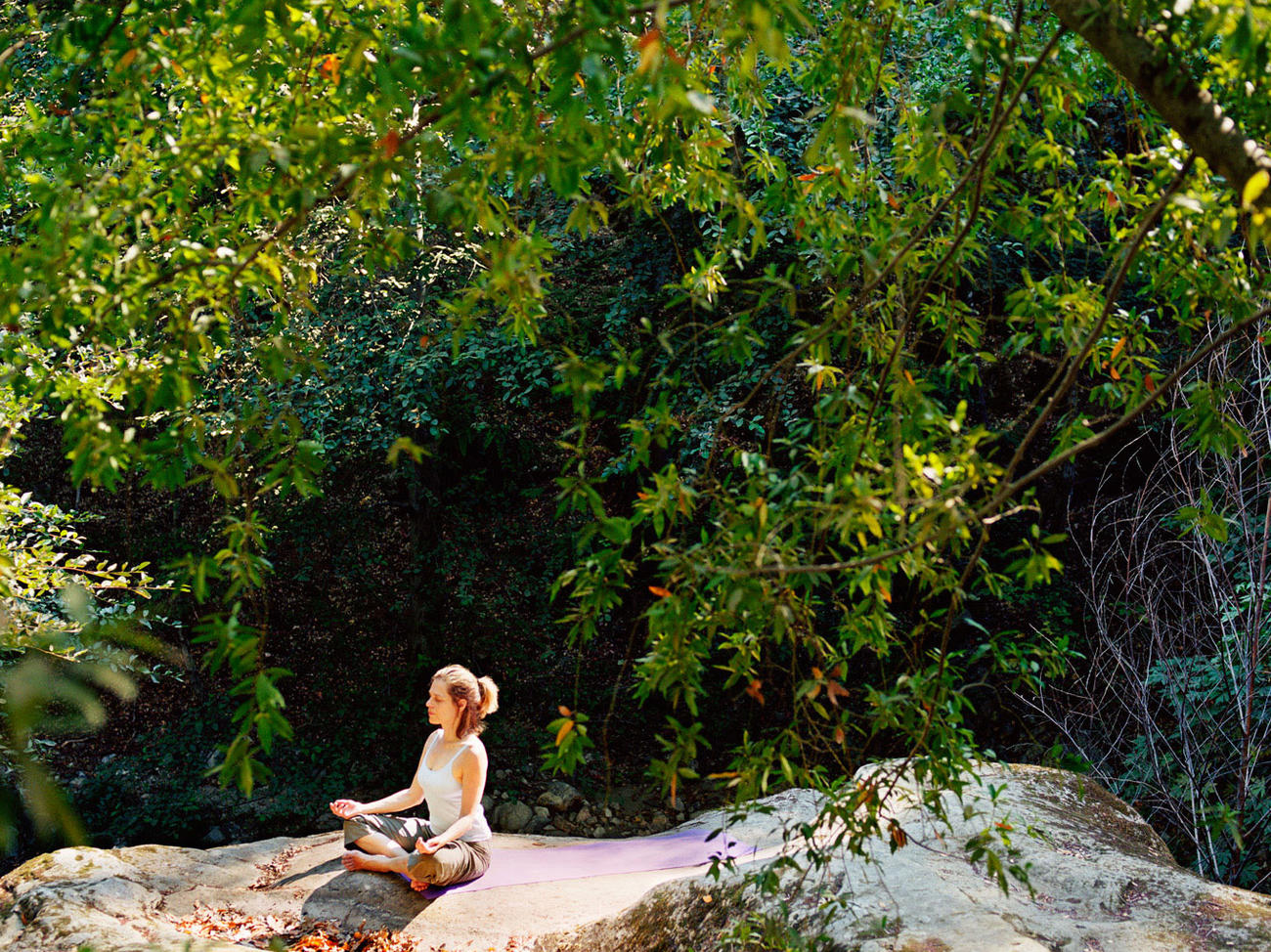 The first gong I hear isn’t really a gong but a gentle ding-ding-ding as a monk moves down the path in front of my cabin. I struggle to my feet, grab my water bottle, and shuffle out into the pitch-dark on my way to morning meditation. It’s 5:20 a.m. and I’m wondering, What am I doing here?

“You can’t sit still,” everyone from my mother to my husband to my therapist has always told me. It’s true. I’m the always-running-around type. Running late. Running errands. Running just to run. I talk as fast as I move, and if I do sit still for any length of time, it’s because I have a laptop propped against my legs.

And I’m not the only one. We live in the Always-On Age. We text while we walk and IM while we talk and spend more time with our screens than with our spouses. I needed a serious reboot, if not a full-on rehab: an escape to a Wi-Fi-free world where people do nothing but sit. Statue-still. Facing a wall. In silence.

Just as thousands of monks, teachers, and students have done here—at the bottom of a Big Sur canyon deep in California’s Ventana Wilderness—every day since 1967, when a Japanese Buddhist monk founded Tassajara, the first Zen monastery outside of Asia.

Surrounded by rising mountains and old-growth pines, Tassajara is an off-the-grid alter-universe, where kerosene lamps are lit by matches and time is marked by a cloud-shaped gong. Spiritual seekers from San Francisco to Stockholm, Moscow to Missoula stroll softly in dark robes, bowing to each other and to mini altars erected everywhere. And from late April through mid-September, Tassajara opens to the hedonistic public. Guests come, 80 a night, for meditation mixed with soaks in the hot springs, hikes along the river, maybe an outdoor massage or yoga retreat—and all the kale, polenta, and whole-wheat sourdough they can eat. Once was, a large majority of Tassajara’s guests were repeat visitors. But these days, 50 percent are here for the first time.

David Fenton
The Bird House cabin, the home of a resident monk, clings to a rocky slope above the center

Like me. Curious, if skeptical, types who’ve meditated maybe once in their life (Buddhism 101, freshman year). So I signed up for the Guest Practice Program: 10 slots for those who want a taste of the real Tassajara, at a fraction of the price. For the next four days, I’m half-student, half-guest, straddling the two worlds like Baby in Dirty Dancing.

“No water bottles inside the zendo,” a monk reprimands in a surprisingly harsh whisper. I’m not off to a good start. She points to a cushion. I take my assigned spot and try to mimic the woman next to me: barefoot, legs linked, back straight. I’m ready to sit.

A bell rings and my mind races. Look at me! Meditating. At the bottom of a canyon. I’m hungry. Tired. What’s she thinking about? Are we supposed to be thinking? How much longer? How much … Then: snooze. I break the cardinal rule of meditation and fall asleep.

I awake feeling disoriented but semi-rested. Everyone stands and chants for what seems like a long time before we file out. As I pass the Zendo policemonk, she whispers, “Please go to the kitchen for soji.” I’m hoping soji is Zen-speak for omelet and hash browns. Instead it means “temple cleaning,” and I find myself tearing romaine lettuce in silence for the next 15 minutes. Then a gong. Finally, breakfast.

I stare inside my bowl of rice porridge, inspecting every surprisingly tasty kernel so as to avoid eye contact with the student sitting across from me. “Good morning,” says a hoodied dude in his late 20s as he bows his bald head.

Modern-day Zen Buddhists aren’t necessarily the wise, wrinkled Mr. Miyagi types you might expect. Nor are they ’60s counterculture castaways in late-model VWs searching for some fashionable Eastern enlightenment. There was a time when you’d stumble on Joan Baez or Linda Ronstadt dipping their toes in Tassajara Creek, when everyone from California governor Jerry Brown to actor Peter Coyote came to the canyon to ride the Buddhist bandwagon.

“It was mostly about being unbound by convention and living in the moment,” says Norman Fischer, a Zen Buddhist priest and former co-abbot of the San Francisco Zen Center who raised his kids at Tassajara in the late ’70s. “It all sounded good to me back then. Still does.”

Today’s visitors are a mixed bag of stressed-out executives, artists, high school math teachers, recovering alcoholics, and, increasingly, technoholics at a “tipping point in their lives,” says Minoria Franks, Tassajara’s reservations coordinator. “We’re seeing a huge wave right now of people fleeing technology for a digital-free environment. Younger people, especially, in their 20s and 30s, who hear about us then come to unplug and practice.”

There’s Mike Borozdin, a 32-year-old software guy who was “blown away” when he came to Tassajara for the first time. He tells me about a new group called Young Urban Zen that meets every week in San Francisco. Twenty-five people showed up to the first meeting. Today, a year later, the room is overflowing. “All of my tech friends are so tightly wound,” says Borozdin. “ ‘The server’s up! The server’s down!’ They’re freaking out about the competition. I’m learning to keep it in the now.”

I think about the late Steve Jobs, a practicing Buddhist and Tassajara visitor. Here was the person perhaps most responsible for busying our lives, and he got his spiritual nourishment at the very place we go to escape the digital noise he helped create. Then I think: There’s something about all this—the isolated beauty and simple schedule, the logic of the gong—that feels deeply, if strangely, familiar. Like we’re tapping into some forgotten algorithm.

After breakfast, we circle up outside. It reminds me of summer camp, except my counselors are monks in dark brown robes. “If anyone finds a striped towel by the pool, please let me know,” says one student. “There’s a dharma talk tonight,” announces another. Then we’re all assigned chores: weeding, dishwashing. I’m on cobwebbing. For 2 1/2 hours, I walk peacefully around the property, over wooden bridges and past creekside cottages, with a 10-foot duster, swabbing away any and all webs I encounter. Work, I’m told, is part of the practice.

The next day, I’m chopping apples into ¼-inch cubes. I have no idea what will become of my apples, but I chop and chop, occasionally chatting with the other students charged with chopping other things. Celery, oranges, tofu. The supply of apples seems endless; the bucket I’m filling, bottomless. But by the time the bell rings a few hours later, signaling the end of work period—and the beginning of my afternoon freedom—something comes over me. I feel, for the first time in a very long time, relaxed. Calm.

I ride the wave of bliss back to my cabin, change into my bathing suit, and set off for Tassajara’s hot springs. More than a hundred years ago, long before this area became the birthplace of the Western Zen movement, stagecoaches would take the steep daylong trip into the canyon to bring people to the healing waters bubbling up beneath Tassajara Creek. And once I lower myself into the 100°+ water, I know why. My calm kicks into another gear. I close my eyes, float, and wait for the next gong.

“Tassajara’s role is the same today as it’s always been,” says Norman Fischer, the Buddhist priest. “When I first got here, I thought this was the most sensible way a human being could live. The way human beings have lived, for centuries.”

Four days later, I’m in my car, winding slowly up the canyon, back to civilization and the noise of my life. Back to my laptop with its clogged calendar and in-box full of unreads. I have no delusions. I know that the calm will eventually clear, and that I’ll return to my always-running ways. But not right this moment. Not now.