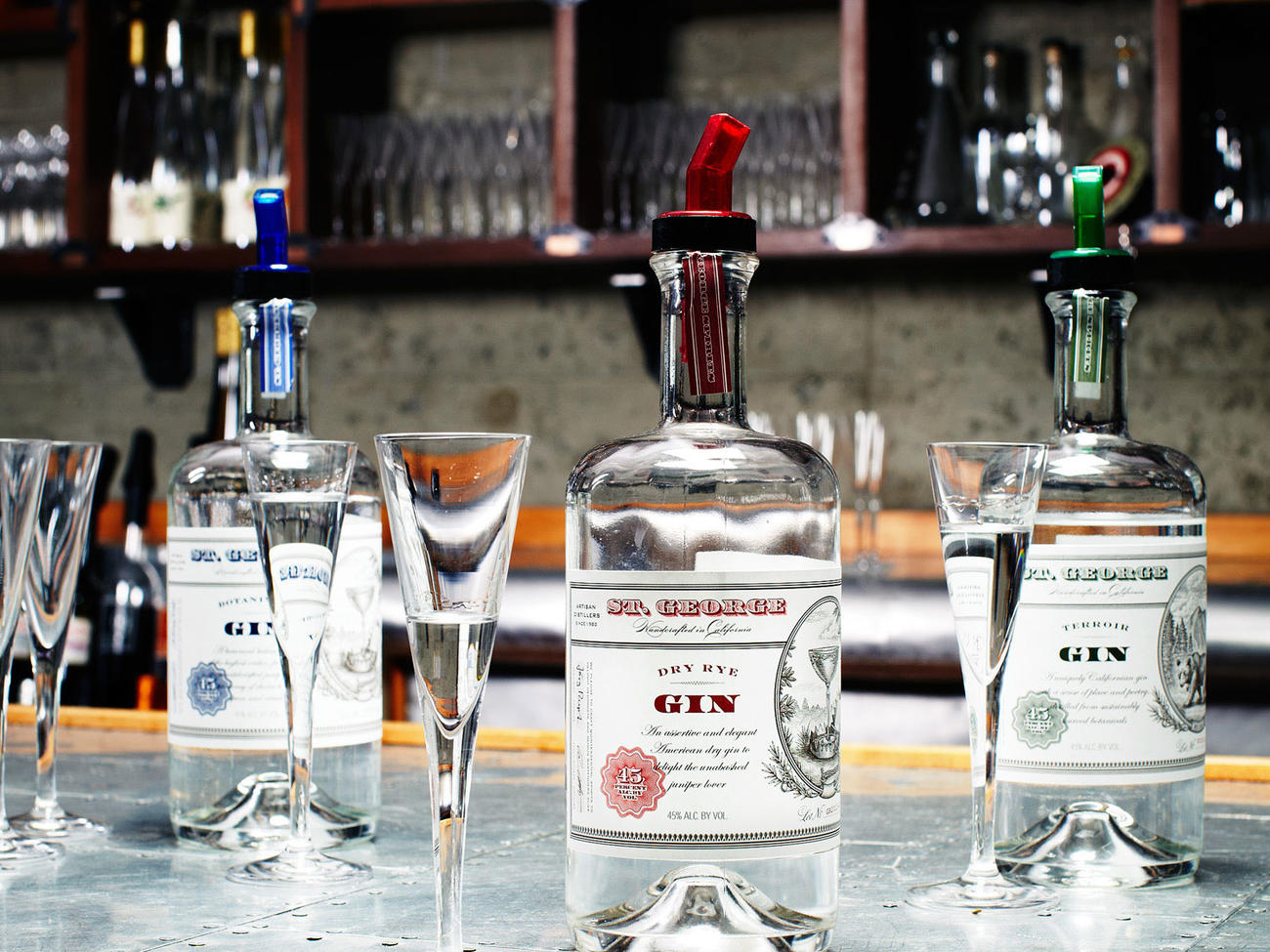 Somewhere between Prohibition and the T.G.I. Friday’s “Girls’ Night Out” menu, gin got a bit boring. The stuff of stodgy evening mixers and watery G&Ts.

But today’s gin is both edgy and urbane, the life of the party and the cocktail lounge, thanks to the work of Bay Area distillers who’ve forgone the musty methods of the big commercial labels in favor of their own artisan spins.

“Mass-produced gin is pretty much one note,” says Lance Winters, master distiller at St. George Spirits in Alameda. “What we’re shooting for are symphonies.”

Lance started working on his compositions after hiking in the woods around Mt. Tamalpais. Inhaling nature’s perfume—bay laurel, wild fennel, Douglas fir—he thought, Wouldn’t it be great to distill all this?

Gin, Lance realized, was the perfect conduit, a spirit that starts out neutral, then acquires the character of whatever you throw in. But he didn’t want to mimic the mainstream brands, which draw heavily on juniper berries. (By legal definition, gin isn’t gin without their piney contribution.)

Like a mad scientist with a culinary bent, Lance began cooking up a broad range of botanicals, from caraway and cardamom to orrisroot and orange peel, in St. George’s customized pot still. The result is a trio of new gins in which juniper plays but one part in a complex medley. The spirits have found a place on bar menus and market shelves alongside a lively batch of other local-born gins. They put a fresh face on a cocktail hour standby, even if they go by the same old name.

THE BEST IN GLASS

St. George Spirits. As the term suggests, Terroir Gin is an expression of the land that inspired it. Hints of coastal sage, lemon peel, and fennel seed produce high-proof York Peppermint Pattie moments: Sipping it, you feel as if you’re walking on a windswept bluff, or wandering through a Central Valley citrus grove. Or, for that matter, as if you’re standing in a tasting room in Ala-me­da, in the former airplane hangar that houses the distillery, which you can tour free on weekends. Best mixed in a Coastal Collins, a spin on the Tom Collins (Terroir Gin, lemon juice, simple syrup, seltzer). Tastings Wed–Sun, $15; free tours Sat–Sun; stgeorgespirits.com

Old World Spirits. A third-generation Croatian winemaker and distiller, Davorin Kuchan launched his Belmont business as an homage to family and homeland, though what he makes is anything but Old World hooch. His bright, crisp Blade Gin takes its name from sharp notes of candied ginger and cilantro. “A great gin should stand up well to cocktails,” Davorin says. “But I also want mine to be stars on their own.” Best mixed in an Aviation Cocktail (Blade Gin, maraschino liqueur, lemon juice, crème de violette). Tastings/tours last Fri of month, $15; oldworldspirits.com

Distillery No. 209. Named for a 19th-century  St. Helena distillery, 209 makes its small-batch gin at Pier 50 in San Francisco. Distiller Arne Hilles­land, a former techie, joined the booze boom in the early 2000s and tinkered with his recipe for a year before arriving at the beautifully balanced, aromatic No. 209 Gin, with subtle hints of citrus and spice. His No. 209 Kosher-for-Passover Gin begins with a sugarcane base to meet Passover requirements but retains the flavor profile of its grain-based twin. Best mixed in the Astoria (No. 209 Gin, dry vermouth, orange bitters). No tastings or tours; distillery209.com