Find courage as you take the helm 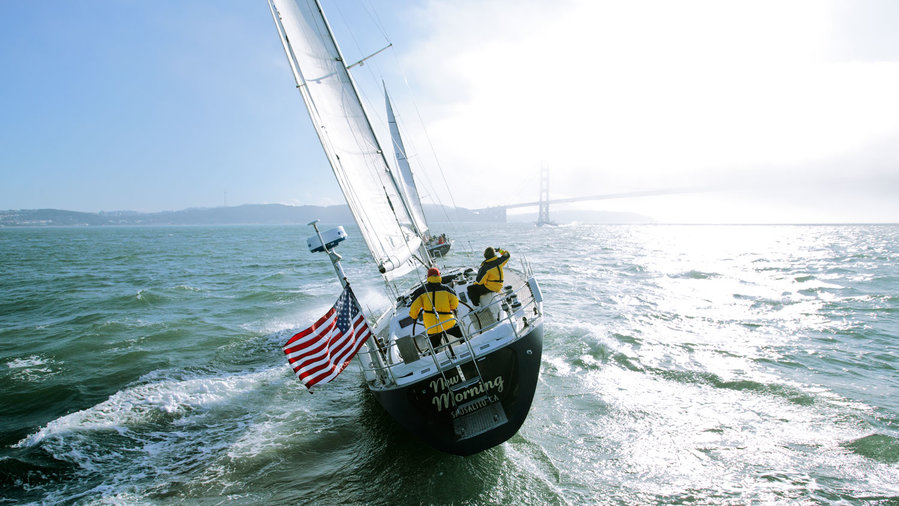 Sailing is for heroes. Sailors hop to it, and in an emergency, they can be counted on to reef the mainsail and batten down the hatches.

I am no sailor. In dire circumstances, such as the time my husband crashed our rented houseboat (repeatedly) into a dock, I have been known to jump around, squeal, and flap my arms. But every summer, my father-in-law takes me and my husband out on his boat, and while he and my husband bustle about, I feel like a lump in the way.

I hoped that by taking an introductory five-day sailing class at OCSC Sailing-San Francisco Bay in Berkeley, I’d become a little more sailorlike. I’m not ready to say this happened, but I did fall in love with the windswept feeling of floating in the center of the bay. THROWN IN At OCSC Sailing, we would learn “by immersion,” explained instructor Lindsay Spiller on my first day. “We’re going to throw you into sailing.” There were six of us in the class: three per boat, rotating at the roles of skipper, crew, and observer. Down at the docks, Spiller spoke of how the boom vang was developed by the Dutch, how the term “port side” was inherited from the French. I saw the poetry of sailing―for generations, the sport has knit the world together. I was joining a tradition that goes back to Homeric days. This was my Odyssey. I had a Hellenic gleam in my eye and an adventurer’s heart as we headed out from the marina to the waters of San Francisco Bay. The bay, with its fickle currents and wind, is a tricky place to sail. But at first, it didn’t seem hard: The wind lifted the sails, the waves merrily rocked the boat―and we were cruising. It was wonderful. It got more complicated when I had to take the helm. “Aim for the post office onshore,” Spiller said, perched behind me as I held the tiller. But it was hard to focus on the horizon. The boat rocked. I thought Spiller was helping me, adjusting the tiller―then realized that instead, I was being too timid, letting the rudder win our wrestling match. The sails caught wind, and I overcorrected in the wrong direction (push right to go left? or the other way around?) and then overcorrected again. My boatmates looked a little green when I handed the tiller over to Spiller. GETTING COMFORTABLE On the second day, we practiced jibing, or passing the boat’s backside through the wind. It’s like turning left in a car after you’ve learned to turn right―same idea, but more opportunities for disaster. Plus, imagine making the left turn in reverse. Then I had possibly the most obvious epiphany ever. After watching my boatmate Andrea jibe perfectly, I took the helm. I planned to do exactly what she had, turning the bow from pointing at the breakwater to nosing toward the harbor restaurant. Spiller mentioned that the wind had shifted, but I kept going―I had a plan. He stopped my hands. “You have to pay attention, always, to the wind’s direction. Always.” Duh: Sailing is all about the wind. FINAL TEST We took a series of tests on the last day. Without coaching, we had to position the boat in various directions, tack, jibe, and rescue “Bob,” a floating orange jug whose job is to get thrown overboard. I tacked. I jibed. I moved the boat upwind, downwind, and across the wind. But when Bob flew overboard, the emergency situation tapped my base nature: I got flustered. I squealed. If the tiller hadn’t been in my hands, I might have even flapped my arms. I promptly forgot the figure-eight procedure we’d practiced. I drew up somewhat near Bob and reached down to grab him, but only splashed water into my mouth. The second time, I didn’t even get near him. The third time, I lost the wind and stalled. Bob kept bobbing, riding the waves. He would be the first to tell you that I didn’t pass my competency test. I’m not ready to be anyone’s hero, not even a plastic jug’s. But included in my class fee is the chance to return to OCSC to practice until I get it right. They just might make a hero out of me yet. Where to learn Two organizations offer online resources and list certified schools: the nonprofit US Sailing and the American Sailing Association. Most gear will be provided by the school; bring your own sunglasses and hat, and straps to keep both on in windy conditions. Sailing gloves protect your hands, and white rubber-soled shoes keep you from slipping. Wear plenty of sunscreen.