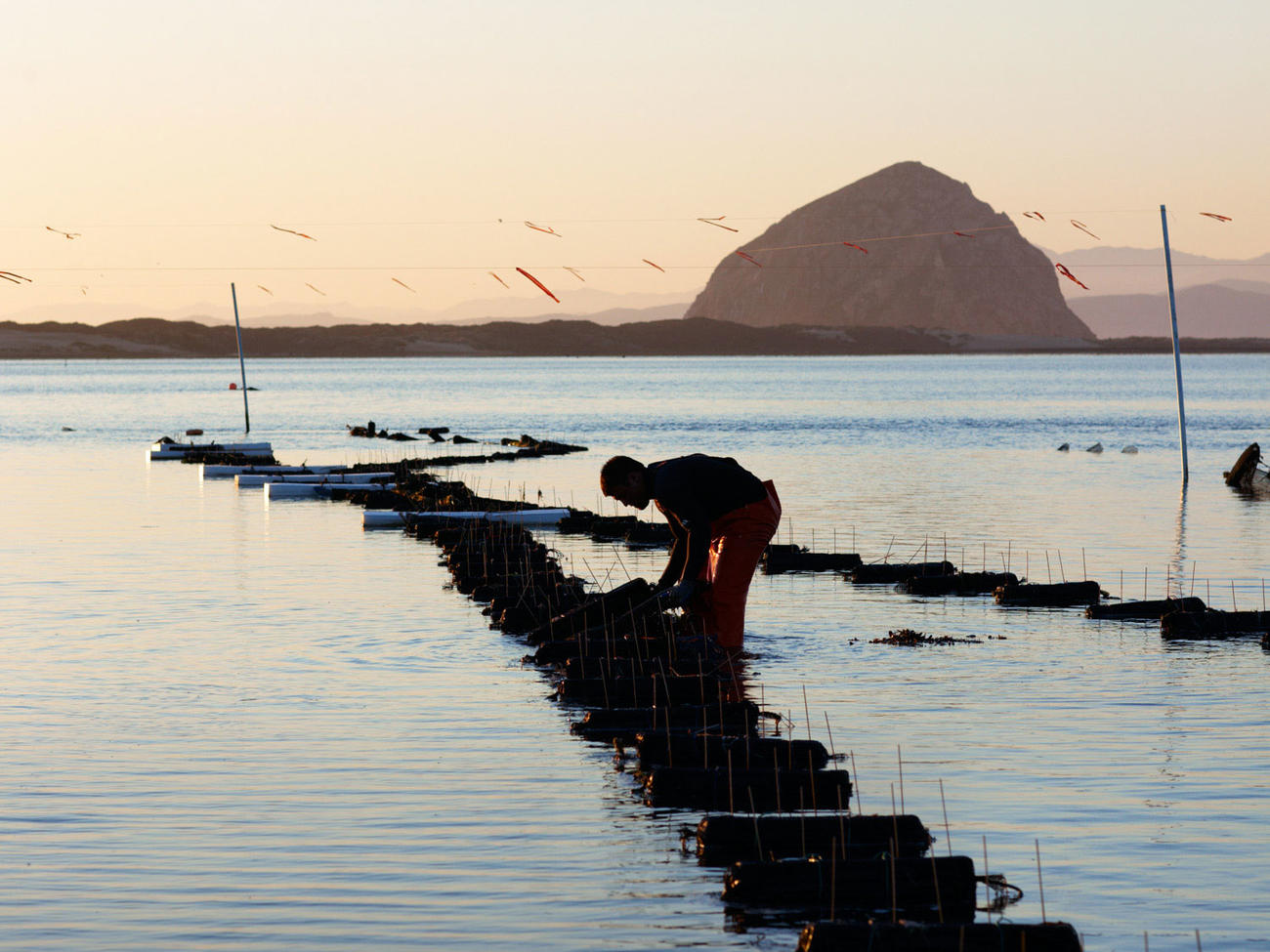 Snick. That’s the quiet sound of Neal Maloney shucking an oyster. With the midday sun glinting off the bay around us, he pops it open as effortlessly as if he’s unlocking his own front door. He hands it, all shimmering and pearly, to me. In a second I’ve slurped it from the shell. It’s firm, cold, and briny-sweet, with a faint melon-and-cucumber finish that makes me immediately want another one.

A 29-year-old marine biologist who radiates contentment, Neal has been growing oysters in Morro Bay, on California’s Central Coast, for 7 years, first for Tomales Bay Oyster Company, now for himself. As he explained to me after I’d clambered onto his Morro Bay Oyster Company—a bobbing bunch of wooden platforms surrounded by chains of floating mesh oyster bags—his oysters, Pacific Golds, are good in part because of where they’re grown. Pacifics (Crassostrea gigas) are a mellow-tasting variety popular all over the world, and have been raised in Morro Bay since 1932. Like all oysters, they’re flavored by their home waters. That’s why a Hama Hama Pacific, from Washington, will taste different than a Pacific from Oregon’s Yaquina Bay—and why they’re often known by their place names.

Photo by Chris Leschinsky
Oysters are a valuable part of the local ecosystem.

How Morro oysters get good

I soak up the view as Neal describes how that very scenery matters to his oysters, much like terroir in wine. Morro Rock juts up at the far end of the bay like the brow of a submerged giant. Along with a sand spit, it helps shield the waters here, making them calm enough for oyster production. Even so, there’s an exhilarating amount of wind, enough to bring the blood to our cheeks, spray our sunglasses with briny drops, and whip up waves that tumble the oysters around in their bags. And that is a good thing. “Oysters will turn into a brick if you don’t shake them up,” he says. Left undisturbed, they’d glom onto each other and become a fortress of twisted shells. Neal hauls up a nearby bag for me to see, and every oyster in it is separ­ate and shapely.

Then there’s the water itself, full of minerals washed down from the volcanic soil around the bay, which deepens the oysters’ melon-cucumber flavor. Fresh water flowing into the bay from aquifers and creeks adds sweetness. More seasoning comes from nutrients in the deep ocean shelf a little way out, arriving with the twice-daily tides.

The shallowness of the bay factors in too. During low tide, Neal explains, the bags end up resting on the mud, forcing the oysters to clamp shut so they don’t dry out. Once the tides seep back over them, they open up to feed on plankton and absorb oxygen from the water. This open-close routine strengthens the oyster’s ability to seal tight and keep out bacteria—which gives it a longer shelf life.

Photo by Chris Leschinsky
Neal with a bag of his delicious oysters.

“The bay does a lot of the work for me,” Neal says. But definitely not all. He and his two employees here on the platform—lanky, laid-back twin brothers in bright orange overalls—shake all the bags several times a week, in addition to what the waves do.

As Neal talks, the twins dump harvested oysters from their mesh bags onto a long steel worktable slick with salt water and gray mud, while Rod Stewart belts “Do Ya Think I’m Sexy?” from a yellow radio as sturdy as a Tonka truck. They begin sorting: Oyster sizes run from 2-inch “extra-smalls” to hefty 7-inch “larges,” which go mainly for barbecuing, since the meat shrinks as it cooks. Every now and then a “cowboy” will land on the table, a 1-pound monster about a foot long. One of them can feed four, and forget about slurping—you need a knife and fork.

Some oysters have fragile rims, and these the twins grind against the table. Bits of shell fly everywhere. “Roughing them up makes them better,” Neal says. Those oysters will go back into the water to build up another layer of shell, creating deeper bottom cups—and filling them out with plumper, more luscious bodies. Morro Bay Oyster Company tends three-quarters of a million oysters each year, all by hand.

The oyster as eco hero

Neal tells me why he likes raising them while—snick, snick—he pops open a few more oysters to taste. For lowly mollusks, they’re pretty impressive. They don’t eat ground-up fish the way other farmed seafood, like salmon, do. Being filter feeders, all they need is plankton, a floating buffet of microorganisms already in the water. This makes oysters not only cheap to raise but also harmless to other species.

What’s more, their industrious filtering clarifies the bay, which makes for cleaner water and gives eelgrass the light it needs to grow. There’s a big patch of eelgrass just a few hundred yards away from the platform, in fact. It buffers the shoreline from erosion, making the water that much purer.

I can see how rewarding it might be to raise something that tastes good and gives back. But it’s a lot of work dealing with winches and a floating dock, and shaking bags that weigh up to 100 pounds each, whenever the tide is low, day or night. What would possess a person to want such a life? “My office is Mother Nature,” Neal says. “We see these sunsets and sunrises. Sometimes I’m out at midnight, harvesting oysters, and the winds die down and there’s a full moon—it’s like it’s neon.”