Terrific, freshly harvested ingredients have been the trademark of Bay Area restaurants for decades. Now there’s another delicious revolution 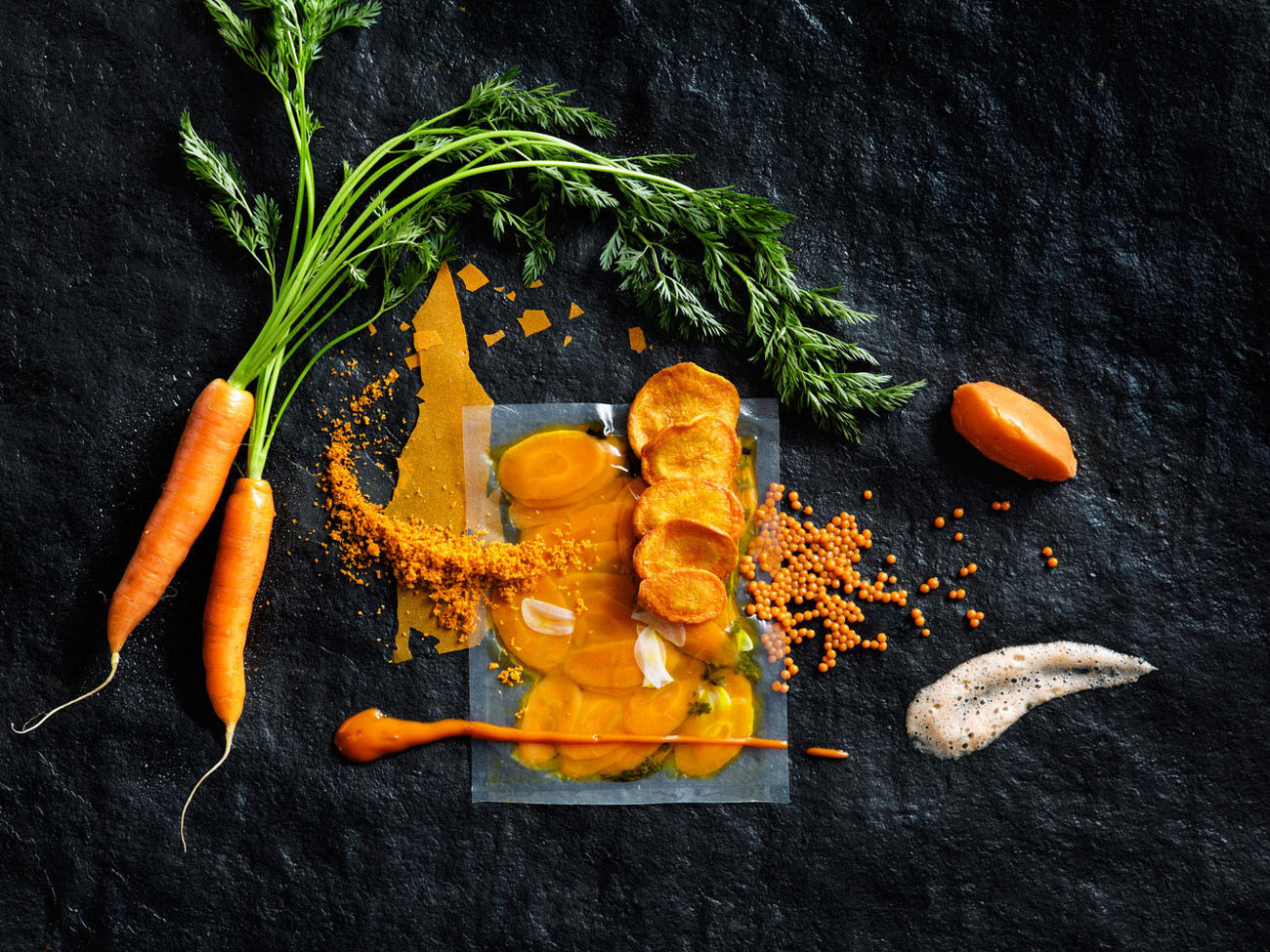 Maren Caruso
A carrot takes on different forms and textures at the hand of chefs who are using modern techniques.
Written by Amy Machnak December 17, 2012
Share this story

About halfway through my 22-course dinner, the server places a single bowl before me, and, even though I’m dining in one of the most expensive restaurants in San Francisco, he doesn’t give me any silverware. Instead, he instructs me to pick up the food with my fingers. But what’s in the bowl is not exactly finger-food-friendly: a miniature-garden tableau of bright, edible flower petals, a translucent strip of fennel, a wedge of tender baby turnip, a ribbon of carrot, and things I don’t even recognize—surprising, since I worked as a chef in the Bay Area for close to two decades. My fellow chefs and I lived and breathed the Alice Waters philosophy of putting fresh vegetables on the plate and calling it dinner. We worshipped the ingredient. Doing anything that deviated from this approach was frowned upon not only by diners, but also by other chefs.

But I’ve come to Saison, a Mission District restaurant in a converted stable, because I’ve heard that Joshua Skenes is one of at least a dozen Bay Area chefs who are disrupting this core philosophy.

They still worship the ingredient—arguably even more so. Many partner with or own their own farms, choose rare seeds to plant themselves, or even hire foragers to pick wild edibles.

But then these chefs manipulate the super-fresh ingredients with techniques that are transforming fine dining. This stunning array of flavors, textures, and presentations is called modernist cooking (or sometimes molecular gastronomy).

Take the ordinary carrot. If you blend carrot juice with agar, a seaweed-derived substance that turns gelatinous in liquid, it thickens the juice without needing heat, which would alter the raw flavor. Or put the carrot juice into an eyedropper, squeeze it into a flavorless form of gum (sodium alginate), and it’ll form beads for a carrot “caviar.”

Although such gastro-magic has been going on for years, the result hasn’t always been good. In the extreme, it can make food taste and feel artificial. It can be a crutch for lazy cooking. Cook my rib-eye sous vide, in a vacuum-sealed bag in a water bath? Lazy. Meat needs fire for the right char and taste.

When done with restraint, a whole new type of cuisine is making it to the plate, as it is at several Bay Area restaurants.

Skenes, for example, chooses to poach quail eggs in a circulator (a type of water bath), rather than on a stovetop. With this method, the egg white is perfectly firm, the yolk thickened but still runny. But the most common cooking method at Saison is possibly the oldest: fire. And Skenes experiments with what fire can do; he sears scallops directly on clean embers, or buries a vessel in ash to cook at an exaggeratedly slow pace, adding just a kiss of smokiness.

As course 19 arrives, I dip my spoon into a delicate white chrysanthemum foam laid atop a barely set lemon curd. It’s a modern version of a lemon meringue pie—except the locally grown lemon pieces in it were preserved by Skenes seven months ago; the cold citrus custard was set with gelatin; and the “meringue,” instead of being stiff flavorless egg whites, is creamy, with the essence of soft, just-picked petals. Many of Skenes’s ingredients come from local farms and even his own 2-acre garden in Point Reyes Station, just north of San Francisco. It’s this perfect blend of two philosophies that excites me: über-local and ultramodern.

At a recent food conference, Grant Achatz, a Chicago-based star in the modernist world, said: “People used to go to dinner before they went to the theater. Today, dinner is the theater.” Part of the draw of this style is the entertainment factor. Carrot “glass” is—let’s face it—a showstopper.

I take in the next food performance at Atelier Crenn in San Francisco’s Marina District, where chef Dominique Crenn excels in this new dinner theater.

Rather than a typical menu, guests are given a poem (yes, a poem) that Crenn writes for each season, along with a deliberately vague list of dishes. Its purpose is to build anticipation. In dramatic fashion, it doesn’t reveal precisely what’s coming next.

The show begins with a low hum of a soundtrack from the kitchen. While Crenn directs her staff throughout the evening, plates come from behind the glass wall that, like a curtain, separates the backstage from the spectators.

It’s with Crenn’s study on alliums that my belief in this blended, and balanced, style of cooking deepens. For this third course, a dozen varieties of the bulbous plant arrive in different forms: a shallot marmalade, a grilled baby leek, a thin dehydrated “onion ring,” and a tiny bud of garlic scape (the flower). I finish my last bite of this extravagant ode to an ordinary vegetable and think, Who would have imagined serving an entire dish of just onions?

Then comes “Walk through the Forest,” a stunning play on what might grow on the forest floor. On my visit, the course has a pine-scented meringue with four mushroom varieties prepared differently: grilled, sautéed, puréed, and dehydrated into dust, with hazelnut crumbs that look like soil. Many of Crenn’s ingredients are sourced from Jacobsen Orchards in the Napa Valley town of Yountville, and in her hands they become an edible fantasia—magical and feminine.

Can a restaurant go too far? Sure, when the finished dish looks like a science project. This is, after all, San Francisco, and we still want to eat real food. But the next time I’m at the farmers’ market, I’ll be looking at the organic carrots and wondering what’s possible.

6 Chefs You Should Know

These Northern California chefs are masters of the farm-to-foam style. Menus are rare—and even if there is one, descriptions can be vague and dishes may not look the same between visits. Dietary requests can’t always be accommodated (so call ahead).

James Syhabout, Commis (Oakland). A delicious demonstration of both technique and subtlety. Soft-set circulator egg yolk floats in a sweet onion “soup” with smoked dates. The eight-course menu, with exceptional wine pairings, is a bargain at $120. commisrestaurant.com

Daniel Patterson, Coi (San Francisco). A 12- to 14-course meal made from foraged and farm ingredients that are prepared with jaw-dropping skill by a leader of the modernist style. The regular menu is $165, the vegetarian $145. coirestaurant.com

Dominique Crenn, Atelier Crenn (San Francisco). Whimsical courses inter­spersed with one-bite treats, like an eggshell-thin sphere of white chocolate filled with cider and crème de cassis and set on a miniature pedestal. The 12- to 14-course menu is written like a poem and is $160 before wine. ateliercrenn.com

Joshua Skenes, Saison (San Francisco). Courses come from both the kitchen and the wood-burning hearth. Vegetables from the wild or Skenes’s garden are sliced just before plating to ensure the freshest flavor. Expect to pay $198 to $498 for 16 to 22 courses, with weekend seatings and a place at the Chef’s Counter at the upper end of that range. saisonsf.com

Christopher Kostow, the Restaurant at Meadowood (St. Helena). A nine-course edible waltz with notes like sweet peas, flowers, and greens so tiny that they’re handled with tweezers—all picked each morning from the on-site half-acre garden—along with an occasional dusting of vinaigrette “snow.” The price at this three-Michelin-star restaurant starts at $225. Wine pairing? Another $225. The Chef’s Counter is more. therestaurantatmeadowood.com

How to buy farm-fresh eggs