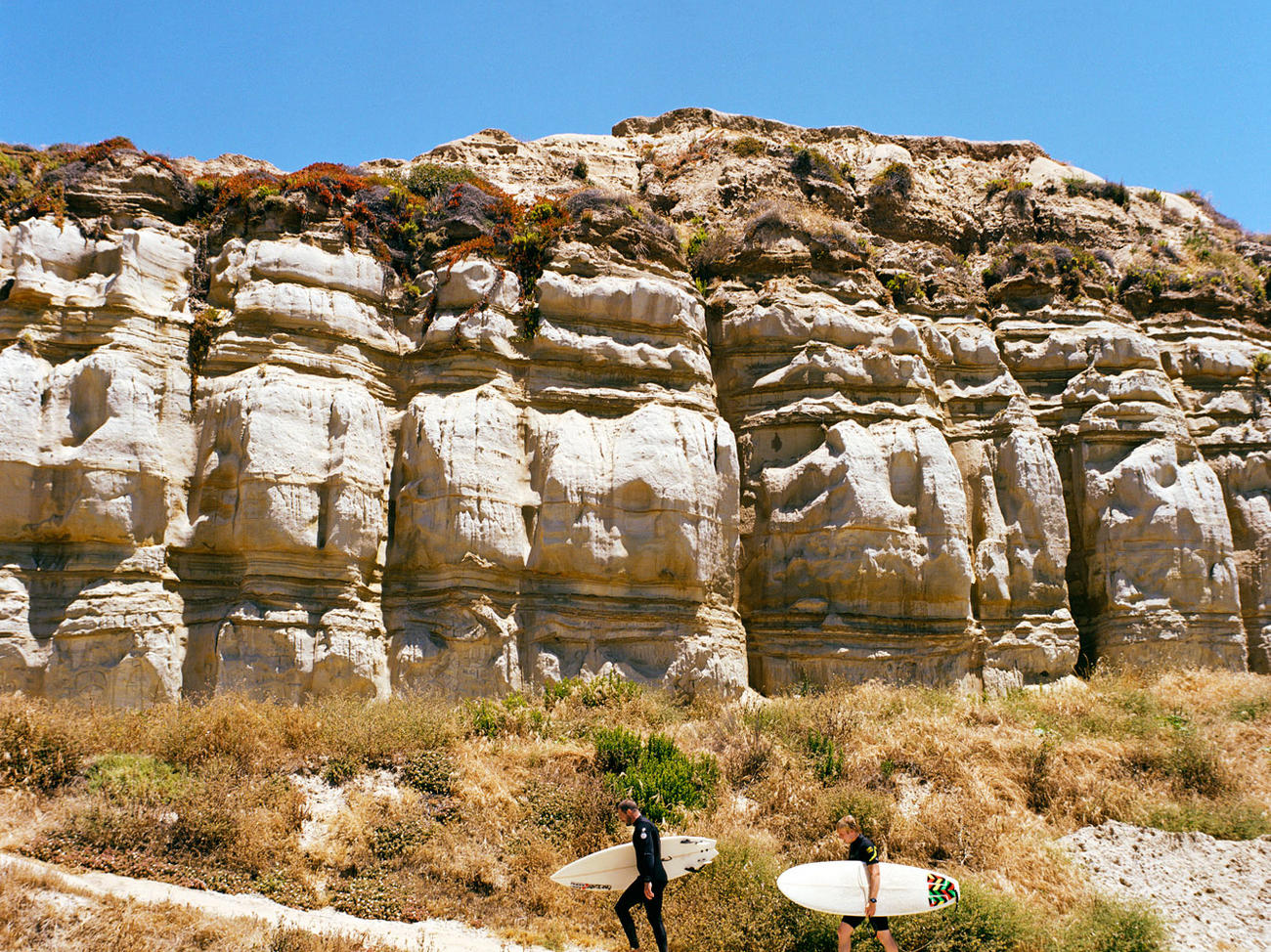 Gina Sabatella
At Calafia, picturesque sandstone cliffs serve as the backdrop for your day in the sun. Tired of Calafia? Hop over to nearby State Beach or Lobeiro park for a change of scenery.
Written by Nina Elder June 29, 2011
Share this story

Why go now: The surf’s up, but the pace is slowed down in this charming small town, where fine wine and farmstands meet big waves and a chill surfer vibe.

Easy-peasy pull-over: It’s right off I-5, so you can’t beat it for beach convenience.

The look: White stucco adobes with red-tiled roofs line the curvy streets, making this town feel like a “Spanish village by the sea”—just what founder Ole Hanson envisioned back in 1925.

Walk on water: The fishing pier stretches 1,300 feet into the Pacific.

Park it by the ocean: Between State Beach, Calafia, and Lobeiro park, you’re in for a coastal three-in-one at San Clemente State Beach. Which to pick? State is the largest, with calm surf perfect for swimming and bodyboarding. On Saturdays, pop into the visitor center, with a room dedicated to surf memorabilia. Calafia (pictured) is just north, where steep sandstone cliffs make a dramatic backdrop for sunbathers. Or follow the path from Calafia to Lobeiro park for a picnic on the lawn with ocean views. parks.ca.gov

Gina Sabatella
La Casa Verde de Granada is an artist’s co-op that offers cute wares for you to browse.

Quirky shopping: Looking for a cast concrete birdbath in the shape of a rhubarb leaf, a vintage mirror, or Chuck Berry Greatest Hits on vinyl? Look no further than La Casa Verde de Granada, an artists’ co-op that feels more like a funky antique store, with fun finds from estate and garage sales. 130 Avenida Granada; 949/498-2560.

Gina Sabatella
Build your own burger at the Riders Club Cafe.

Gina Sabatella
Hop by VR Green Farms on Saturday to get fresh produce for your next dinner.

Veggies on the green: Sure, you can play nine holes at Bella Collina golf club, but Saturdays you can also buy produce from the 21/2-acre VR Green Farms, near the clubhouse. Look for tomatoes, zucchini, and fresh herbs at the farmstand, and say hello to farmer Nic Romano. 200 Avenida La Pata; vrgreenfarms.com

Gina Sabatella
Indulge yourself at the Cellar wine and cheese bar. Take your food to go if you want to keep soaking up the sun.

Wine break: At the Cellar wine and cheese bar, food and drink share equal billing. Pull up a stool and order a glass of Rhône-style red and a wedge of triple-cream Red Hawk. Headed back to the beach? Grab a baguette sandwich and a bar of fair-trade chocolate. $; 156 Avenida Del Mar; 949/492-3663.

Shop like a surfer: 3 stores even nonsurfers will love

Bargains, dude! Locals head to Trestles Surf Outlet, named after the famous surf spot nearby, for great deals on wetsuits, board shorts, and swimsuits. The 20 to 50 percent off saves more for that sweet board you’ve been eyeing. 3011 S. El Camino Real; 949/498-7474

Surf gear gone green: Big-time surf brand Hobie gets eco at their Green Room downtown, where everything is Earth-friendly—from organic cotton shirts to board shorts made from recycled water bottles. 151 Avenida Del Mar; 949/542-3400.

Top 10 Beaches of the West