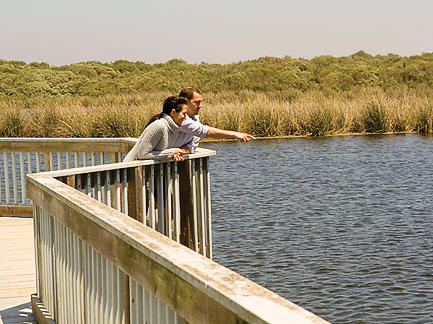 Sunset at the beach: the staple of personal ads and romance novels. But trust me ― as sunsets go, this is an epic, a masterpiece.

We’re at Oso Flaco Lake, on California’s Central Coast. My wife, Becky, has never been to this spot, so I wanted to show her the lake and, beyond it, a beach with churning, restless surf.

Great stops: Dining, lodging, and things to do along California’s Central Coast

We follow the boardwalk along the lake and then through the shifting dunes. The fall day has been overcast, but the sands begin to brighten to gold. By the time we reach the ocean, the setting sun has emerged beneath the layer of clouds along the horizon. Everything―ocean, dunes, underside of clouds―is suddenly on fire with spinning oranges and reds and purples.

Neither of us has ever seen a sunset quite like this. But while we’re astounded, we’re not entirely surprised. Because when we began our 670-mile round-trip drive through the Central Coast’s wine regions and along its incomparable coastline, we were venturing into the California of our dreams.

We splurge with a night at the Four Seasons Biltmore Resort. It’s Santa Barbara condensed, all ocean and gardens, archways and decorative tile, trailing bougainvillea and a rambling Moreton Bay fig. The mood here is decidedly relaxed, especially compared to posh oceanfront spots in other beach cities that have an almost white-gloved fussiness about them. This too seems to be a reflection of Santa Barbara, where the surf vibe and sea breeze seem to chill out loftier pretensions. Santa Barbara is a city that reveres not just its Dons but its dudes too.

In that spirit, we eschew some of the fancier dinner spots in town for one of the best. La Super-Rica Taqueria is really a glorified taco stand, with a zigzag roofline and a covered patio. But what it lacks in decor it makes up for in authenticity, especially its handmade corn tortillas.

With its long lines, La Super-Rica demands some strategizing. The patrons in line ahead of us are weighing their choices with the solemnity of the condemned choosing a last meal. Becky, a much nicer person than I, senses my escalating impatience. She gives me a sweet but firm “Be nice” look as I feel the declamation “Holy posole, just make a choice!” rising up from the molten core of my being. But it only takes one bite of my taco to make me a contented man.

The joy of the Santa Ynez Valley and its fellow Central Coast wine regions has always been their blend of kicked-back vibe and knockout wines. These are places to discover wines without being intimidated by adjective-spouting pedants.

Maybe it’s just a coincidence, but our favorite wines come from the least opulent and most un-faux-finished spot. Near Los Olivos, Foxen Winery’s original tasting room is little more than a tin shack. It’s symbolic of how the wine industry has become engrained in the life of the Central Coast. In Los Angeles, every young dreamer is an aspiring screenwriter. Here the dream is to create great wines, with waiters, store clerks, and winery employees all eager to talk about their vines.

Missouri may be the Show-Me State, but California is the What-If State. And as Becky and I drive past rows of vines exaggerating the contours of the rolling hills, we ponder the possibilities of a life in wine country.

David Zaitz
Vineyards near Inn at the Pinnacles

It’s the life that Jan and Jon Brosseau have been building with their own hands since they bought land here in 1978. They’re the owners of the Inn at the Pinnacles, a Monterey County bed-and-breakfast set in the middle of acres of Pinot Noir, Syrah, and Chardonnay grapes. During the week, Jon works in aerospace in the Bay Area, then the couple loads up their car with provisions and heads to the inn for the weekend. Their property sits adjacent to historic vineyards and a few miles from Pinnacles National Park, the landmark volcanic outcrops that Becky and I are eager to explore.

Roughly 37 million people live in California, but we’re the only 2 at Pinnacles in fall. And for good reason. Just as Becky steps out, the threatening skies stop their threatening and deliver the goods. The rock formations disappear behind a curtain of rain and fog. The rain goes all Ringo on the roof, and we listen to the pounding while scanning the skies for the slightest hint of blue. Finally we give up and opt for―what else―a glass of Pinot by the fire. Both warm with nary a hint of smoke.

“The hour of the pearl,” John Steinbeck called it: The early-morning fog hangs low over Monterey Bay and muffles the calls of seagulls and the barks of sea lions as we walk past the Victorians of Pacific Grove, bound for Cannery Row.

The mist obscures the crossovers, the bridges used to transport millions of sardines during the heyday of Monterey’s fishing industry. Fishing boats with upturned bows and low-slung sterns bob along the Monterey Harbor, with its corrugated-iron buildings and lines of heavy wheelbarrows for transporting fish. Otters swim close enough to hear them chew, and I prove my theory to Becky that every harbor has at least one boat named Sea Wolf.

Later in the day we head to Carmel, where people don’t name boats, they name cottages. We veer off into the side streets, where we’re able to get more of the feeling of the old arts colony that was home to some of the greatest artists that California ever produced: poet Robinson Jeffers and photographers Edward Weston and Ansel Adams.

The fog comes back just in time for our hike at Point Lobos State Natural Reserve, south of Carmel. Harbor seals haul out in hidden coves, and the fog drifts through a grove of rare Monterey cypress, where lace lichen dangles from the branches and an orange algae crusts the trunks. Here nature is more perfect than art: wind-sculpted trees placed just so on granite rocks rhythmically washed by waves rising from a jade-colored sea.

Trailed by a collie mix, the woman appears in the doorway of the Henry Miller Memorial Library at Big Sur. Clad in a fuzzy fake-fur coat, she’s in her 70s and is carrying some paintings. It takes a moment before the library and cultural center’s director notices her, but the woman turns out to be the day’s speaker, Gui de Angulo Mayo. Gui, who chronicled San Francisco’s Beat Generation in photographs, is here to discuss her biography of her father, Jaime de Angulo, a legendary Big Sur figure and celebrated Native American linguist and anthropologist.

I had already decided to buy the book before Gui arrived, and she signs it, explaining how her father didn’t think Henry Miller was very smart and mostly ignored the author and painter who settled in Big Sur in 1944.

It’s very much a Big Sur moment: slightly eccentric and wholly serendipitous. Gui, after all, provides a connection through her father to that pre-State Highway 1 Big Sur, when it was an even more pristine and wild frontier than it is today. “What a scene!” Jaime de Angulo wrote as he rode horseback down the coast on trails so steep he became dizzy. “Yes, I lost my heart to it, right there and then. This is the place for a freedom-loving anarchist. There will never be a road into this wilderness … “

There is a road along the Big Sur coast now, but also much that Jaime de Angulo would recognize. Big Sur has a way of perpetually remaking itself yet retaining its essence.

The fog repaints the Pacific, the ocean keeps carving the land, and the land changes from gold to green with the arrival of the rains. Beautiful as it is to look at, I’m not sure any landscape smells as good as Big Sur either. We stop at a canyon, where the first rains have unleashed the oils in the sage, which join the pine spice of redwoods and the salt air of the ocean into a fragrance that should be bottled as Eau de Sur.

I’d like to claim that, inspired by Jaime de Angulo’s story, we decided to camp alongside a creek with only the redwoods and stars above us.

But instead we semi-rough it at Treebones Resort, where we stay in a yurt―complete with electricity and a hardwood floor―that overlooks the ocean at the southern end of Big Sur. The yurt’s canvas walls and wooden lattice supports rise to a roof, where a round skylight opens to views of the night sky. Becky sleeps soundly, lulled by the rhythmic crashing of the waves, but I wake up frequently to watch the passage of the stars across our private galactic porthole.

We drop down from the cliffs of Big Sur and go south to the more open coastline of Point Piedras Blancas and San Simeon.

William Randolph Hearst wasn’t satisfied with just gazing out on the universe. He wanted to own it too. La Cuesta Encantada, better known as Hearst Castle, is the California dream writ large: a Mediterranean fantasy, created by the great Berkeley architect Julia Morgan, where Hollywood stars and the San Francisco elite were brought together by perhaps the only man colossal enough to stand astride both worlds.

We’re basically newcomers to California, but I think we’ve heard the call of this coast. It’s a call where many parts harmonize: the wind, the waves, the high cries of seabirds, and the low moans of elephant seals. You never know. One day our question may change from “What if?” to “Why not?” and this gorgeous coastline of ragged bluffs, sea stacks, and mountains could become home. Or maybe not. But there’s certainly no harm in dreaming, right?

Land of Lakes Road Trip Across the California-Oregon Border

6 Iconic National Parks to Add to Your Bucket List