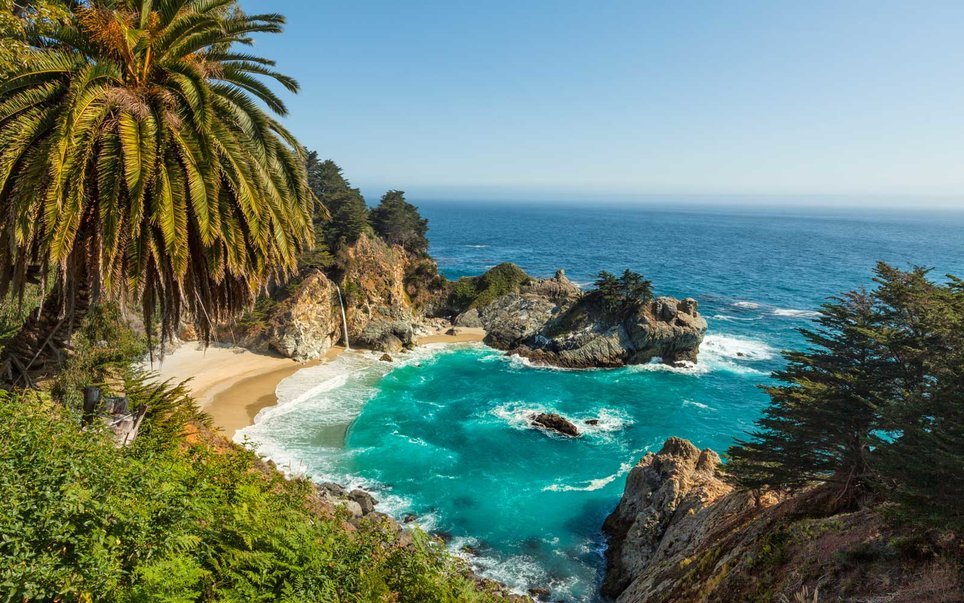 Realizing its projected completion date, Caltrans opened the new Pfeiffer Canyon Bridge on October 13, rendering the 24-mile stretch south of the bridge accessible by car for the first time since March.

The California Department of Transportation declared the Pfeiffer Canyon Bridge (about a half mile south of Big Sur Station) damaged beyond repair following a mudslide that loosened the system’s foundation, and demolished the original bridge in March.

With a little creative planning, weekend getaways and vacations to and from Big Sur were possible during construction. But now, the largest gap in Highway 1 is fixed, and getting to and from Big Sur is less of a hassle. The completion of the $24 million Pfeiffer Canyon Bridge is cause for celebration among residents, businesses, and travelers alike. Although most businesses, parks, and campgrounds in Big Sur have been open since late spring, the road closures complicated traveling to and from the region. Describing the period during which the bridge was closed as “unsettling,” Chamber of Commerce Secretary Diana Ballantyne said “everything feels back to normal” again in Big Sur. “It’s a great opportunity to experience Big Sur without the traffic,” said Ballantyne, predicting smaller crowds in the coming months.

Here’s the scoop on what’s open now, how closures might affect winter travel, and the easiest routes to Big Sur with roads back in action.

Pfeiffer Big Sur State Park is now open for camping and hiking. Andrew Molera State Park is still closed to campers, but most of the hiking trails west of Highway 1 are now open. As state parks have taken down the foot bridge for the winter, zealous hikers must wade across the Big Sur river to access the trails. Travelers should check the California Department of Parks and Recreation website for the most up-to-date information on park and trail closures.

Tourist favorite Pfeiffer Beach, which was closed for seven months due to flooding and road damage, officially reopened to the public mid-October, coinciding with the bridge’s unveiling.

Exempted from fears of bridge collapses, SoCal travelers faced a different set of issues: road closures from multiple mudslides. Known as State Route 1, the stretch of Highway 1 from Ragged Point (15 miles north of San Simeon) to Gorda, the area encompassing Salmon Creek, is still not fully operational. The highway from north of Salmon Creek through Gorda to the south is still closed due to the Mud Creek slide, which interred a significant portion of Highway 1 on the coast. In August, Caltrans released its plan to build a new roadway over Mud Creek slide. With a $40 million price tag, the road should be open to traffic by late summer 2018. Unfortunately, another year of restricted access from the south thwarts popular tourism from SoCal cities like Los Angeles and Santa Barbara. Even with the road closed, local businesses are open on both sides of Mud Creek. The detour, which takes drivers southeast from Ragged Point then north on the 101, features off-the-beaten-path vineyards and lesser-known vistas that drive a newfound appreciation for the Central Coast.

Travelers, be sure to check traffic conditions on the Caltrans website before hitting the road, as parts of State Route 1 may be closed at certain days and times for construction.

Big Sur from the East

From Highway 101, road trippers (RVs not recommended) can take Nacimiento-Fergusson Road, the only alternate route to a small open section of southern Big Sur. The single-lane, paved road may be narrow and windy, but it is open for business and ready for adventure seekers. From there, Highway 1 is accessible between Limekiln State Park and the town of Gorda. Open attractions in the area include Limekiln State Park, Kirk Creek Campground, Plaskett Creek Campground, Sand Dollar Beach, Jade Cove, Gorda Springs Resort, and Treebones Resort (home to the famed glamping resort). If you decide to take Nacimiento-Fergusson Road, preparation is crucial. There will be no gas stations or cell phone reception on the way, and driving this route at night is not recommended.

Hit hardest by the flooding and road damage, the middle stretch of Big Sur has slowly rehabilitated over the past eight months.

Tourists returned to the northern region of Big Sur this summer, but prior to the reopening of the Pfeiffer Canyon Bridge, businesses in the southern region remained largely isolated. Businesses found creative ways to survive the winter, for example, local favorite Big Sur Bakery’s “pop over” events in nearby cities. With the bridge connecting the regions, it’s no longer a tale of two Surs: you can now drive 62 miles south of Carmel on Highway 1 before hitting a roadblock. In order to drive “through” Big Sur, travelers still need to use the Nacimiento-Fergusson Road detour, cutting inland near the 101.

Coinciding with the bridge’s revival, most south-of-the-bridge locales are officially open for business, including Big Sur Taphouse, Deetjen’s, Hawthorne Gallery, the Phoenix Shop, the Big Sur Deli, the Esalen Institute, and Nepenthe. Beloved Big Sur Bakery remains closed, but owner Mike Gilson said the business is preparing to reopen its doors within the next few weeks. Until then, sweet fixes can be satisfied at Carmel Bakery further north.

Ventana Big Sur an Alila Resort (formerly known as Ventana Inn and Spa) capitalized on the idle time for renovations. The campgrounds reopened in early October, and the new resort features a revamped restaurant, redesigned terrace views, and more.

Preparing for an influx of guests after the months-long hiatus, businesses south of the bridge are hoping for a rebound effect following economic losses.

So you made it to Big Sur. Now what?

Once you’ve braved the roads, it’s time to experience Big Sur’s beauty to the fullest.

Californians are spoiled for choice when it comes to jaw-dropping campsites, yet landing one of the two spots inside this state park is considered the pinnacle of achievement for coastal campers. At Julia Pfeiffer Burns State Park, take the aptly named Waterfall Overlook Trail to its logical end, where you’ll have a front-row seat to McWay Falls, an 80-foot cascade that pours from a granite cliff into the teal Pacific surf below.

Some will question artist Francis McComas’s proclamation that Point Lobos is “the greatest meeting of land and water in the world.” But not after doing a grand-tour hike along Point Lobos State Natural Reserve’s shoreline trails. The roughly five-mile loop hike (use the South Plateau Trail as a connector) shows off Point Lobos’s diverse beauty: China Cove’s jade-colored water, wind-sculpted Monterey cypress, and sea otters feeding in kelp beds. $10/vehicle; 3 mi. south of Carmel; pointlobos.org