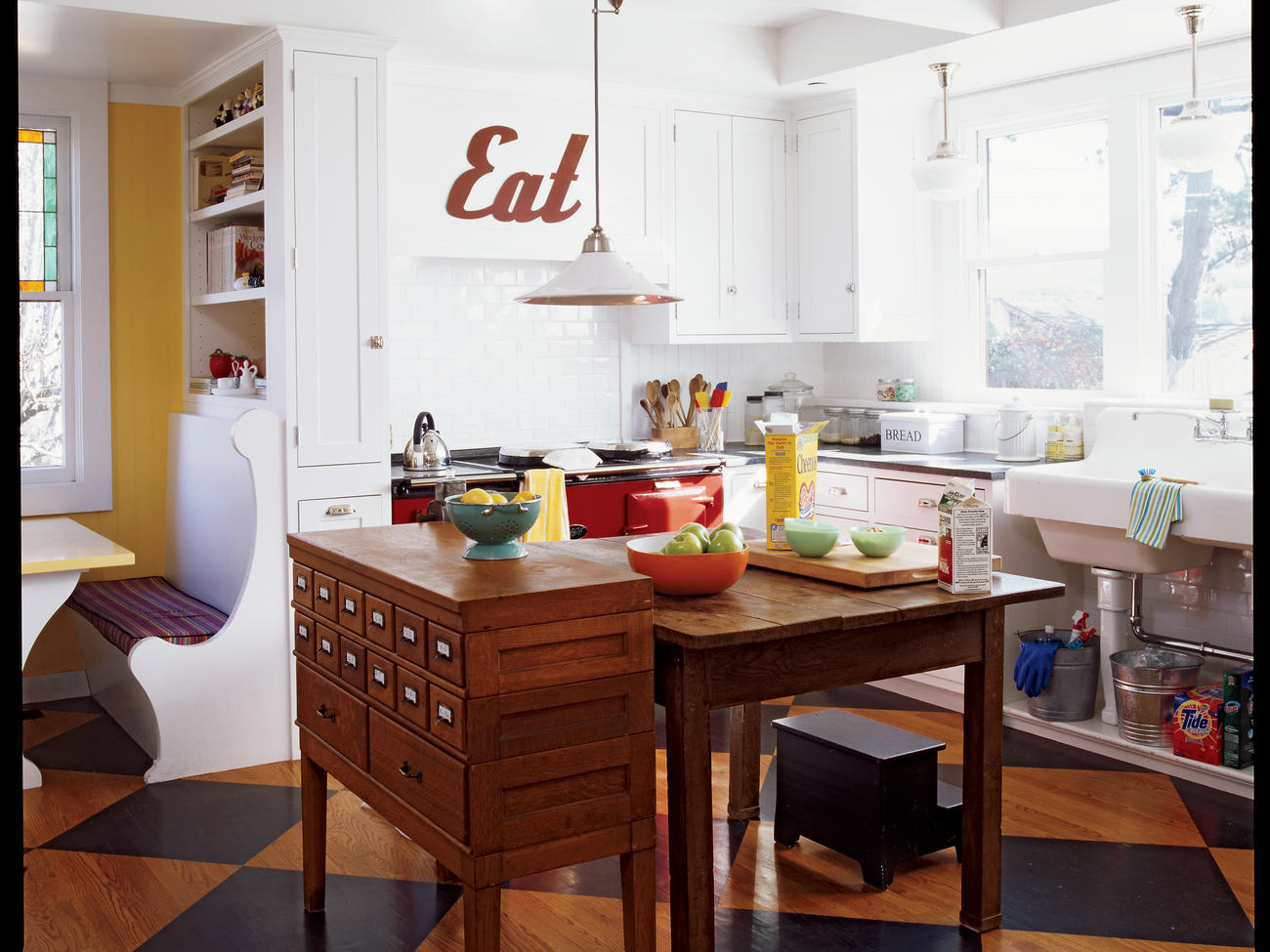 Edmund Barr
An 1887 tavern table serves as the island in the Phillipses' expanded kitchen.
Written by Peter O. Whiteley, January 11, 2007
Share this story

The quaint farmhouse, with neat white trim and early 20th-century gingerbread details, has an almost storybook charm. But what’s not apparent until you step inside is the clever playfulness that infuses every room of Cary and Denise Phillips’s home.

“We have an extremely whimsical sense of style,” Denise says. Work is a source of inspiration for Cary, who has two Academy Awards for technical achievement in computer graphics. “It’s all about making exciting images,” he says.

A shared affinity for vintage homes and a desire to live near the ocean led the Phillipses to the coastal town of Moss Beach, California, about 20 miles south of San Francisco.

“We’ve always preferred old-fashioned things,” Denise says, and the 1910 farmhouse was a standout. Despite its imperfections ― “The interior was kind of funky, and the attic had been remodeled 40 years ago in a bland and awkward way,” Cary says ― they bought it without hesitation.

Eight years later, with twins Zoe and Alexander on the scene, the couple needed to expand. “We wanted to preserve the charm and character of the original structure,” Cary says. But they also needed more bedrooms, as well as space to play and gather as a family. They found a kindred spirit in architect Ellis A. Schoichet.

Schoichet understood the lifestyle that the Phillipses wanted their house to reflect. “They insisted that their home be filled with a sense of lighthearted fun ― for the sake of their children and themselves,” he says.

He devised a plan that increased the size of the house from 1,880 to 3,200 square feet by expanding the kitchen and adding a new entryway, den/guest room, and bathroom downstairs. He also converted the badly remodeled attic into a true second floor with bedrooms, bathrooms, an office, and a playroom. In doing so, he made the home feel like a new chapter in an evolving history, rather than a break with the past.

Cary and Denise both wanted lots of color. “We felt like we were making a big playhouse,” Cary says. They kept the exterior true to its origins with gold-leaf accents, burgundy and white trim, and blue-green paint on the siding.

Inside, the Phillipses filled their home with cherished old furniture downstairs, kid-focused decor upstairs, and generous amounts of vivid color. With a mix of 24 paint shades on the walls, Cary worried briefly if the palette might be too much. In the end, though, “Denise said, ‘It’s just paint,’ ” he recalls, laughing.

The heart of the first floor ― and the Phillipses’ daily lives ― is the kitchen. The former slender galley is now an open, multipurpose space with an adjacent hallway that serves as the drop zone for backpacks, mail, and shoes when the family tumbles into the house. The star of the kitchen is a deep red Aga range with a patina to match the home. An antique barrister card catalog serves as an ingenious storage system for miscellaneous household items.

“We originally set the card catalog there because we didn’t know what to do with it,” Cary says. “And without really planning it, we had batteries in B, matches in M, and so on.”

Upstairs, the palette gets lively. The twins helped out by picking their own bedroom hues (“We kept silent veto power,” Denise says). Zoe chose three shades of pink; Alexander chose a combination of orange, green, and white. Color spills into the bathroom in a mix of aqua, orange, and purple. Although the master bedroom is also upstairs, it’s clear that most of the space is devoted to play. Cary best sums up the overall effect: “It’s an old house that’s young at heart.”