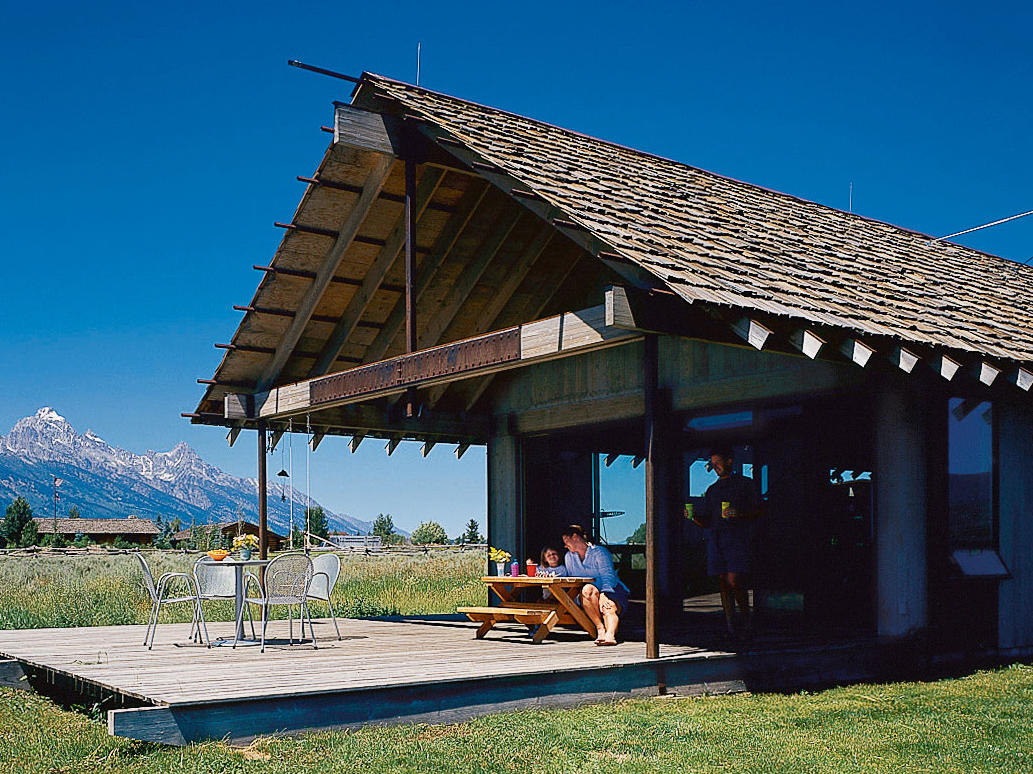 John Granen
The deck becomes an extension of the living room.
Written by Jil Peters, August 15, 2004
Share this story

When architect Eric Logan and his wife, Tracy, moved to Jackson Hole, Wyoming they faced the harsh reality of a resort-town economy. “We sold our home in Denver for what we thought was a lot of money,” Eric explains. “It took time to get used to how much things cost here.”

How to have the home and outdoor-oriented lifestyle they were seeking despite a limited budget was a problem they were determined to solve.

Although Eric had always had a desire to build his own home, he and Tracy didn’t consider the idea in earnest until they surveyed the housing market in the Jackson area.

“The options were often run-down, dark, poorly constructed, and overpriced,” Eric says. “We would start looking, get depressed, become utterly dismayed, stop looking, then get interested again and repeat the cycle.” So they started looking for land. Meanwhile, they rented a log cabin.

After 18 months, they narrowed their decision to two parcels: one steeply sloped and wooded, the other flat and open. Clearing space for a driveway and the foundation on the sloped site would cost a significant amount. “So with our tiny budget in mind, we decided that the flat site was more attractive,” Eric says.

The flat site had another advantage. “We loved the views and the exposure. Plus, I like to see people coming,” laughs Eric. The Logans needed the home to be quick and inexpensive to construct ― the cabin’s rent was more than their Denver mortgage had been ― and they wanted it to be appropriate for its locale.

A simple gabled rectangle, inspired by local ranch structures, satisfied both requirements. And as Eric explains, “The hay shed, whose roof is held aloft by tall columns, is a symbol of shelter on the plains.”

The long, narrow house, built in phases, was sited to make the most of views and sunlight. “The knee-jerk reaction is to point the gabled roof toward Grand Teton, creating a picture-frame view,” explains Eric, “but we decided to capture more of the range.” A band of glass along the long north side of the home and large sliding glass panels on the two short, gabled ends reveal the expanse of the range.

“In the summertime, we wake up, open up the house, and it stays open ― with the girls (Isabel, 5, and Olivia, 1) and the dogs running in and out all day. Yes, it fills with bugs, grass, and dog toys, but that is the way we want to live up here.”

Luckily, the concrete floor is durable and easy to clean. “We kick the chunks out the door first and then mop it down,” Eric says. The floor’s radiant heat keeps the home toasty throughout the winter. Although a more expensive heating option up front, it’s cost-effective in the long term.

Eric used standard and recycled materials throughout the home. “The materials are inexpensive but also have an inherent beauty,” he explains.

Masonite with a linseed-oil sealer ― the same sealer used on the concrete floors ― lines the walls. The cabinetry is maximum-density fiberboard, which is most commonly used as a structural backing.

In the kitchen, the cabinetry is finished with a clear lacquer, and in the new master bath, a black toner mixed into the clear coat gives the fiberboard a greenish hue.

The Logans used lights and faucet fixtures intended largely for commercial use. “We said to ourselves, ‘Okay, this is something we can afford. We can put them in ourselves,'” Eric says. Each of the light fixtures, except four, was made with $15 worth of assembled parts from the Grainger catalog ― an industrial-fixture supply company that sells to businesses only. (Contact a local branch through www.grainger.com to learn which retailers carry the company’s products.)

Next: Space for guests

With Eric acting as the general contractor, the Logans built the first phase of their home (2,400 square feet) for $75 per square foot; a master suite was added later in place of the original garage. The home received an Honor Award from the American Institute of Architects.

The Logans’ home was just large enough for their family, offering little room for guests ― including Eric’s parents, who had been frequent visitors in the past. With this in mind, Eric’s parents decided to contribute to a guest house built adjacent to the Logans’ home. The post-and-beam structural system supports a broad shed roof.

Eric placed the steel columns beyond the edge of the building, which allows for continuous walls of glass. Like those of the home, the exterior materials ― rough-sawn cedar siding and oxidized sheet steel ― blend with the colors of the landscape.

“Mom is over the moon about it,” Eric says. “She likes it so much, she sends her friends.” When visitors are not using the guest house, the Logans use it as a home office and a gym and for entertaining. The open living space with its sweeping mountain views is an ideal spot for music and cocktails before dinner.