How to Design an Ultra-Energy-Efficient Home

Thomas J. Story No furnace or AC? No problem. This “passive house” in San Francisco is so energy efficient, it heats and cools itself 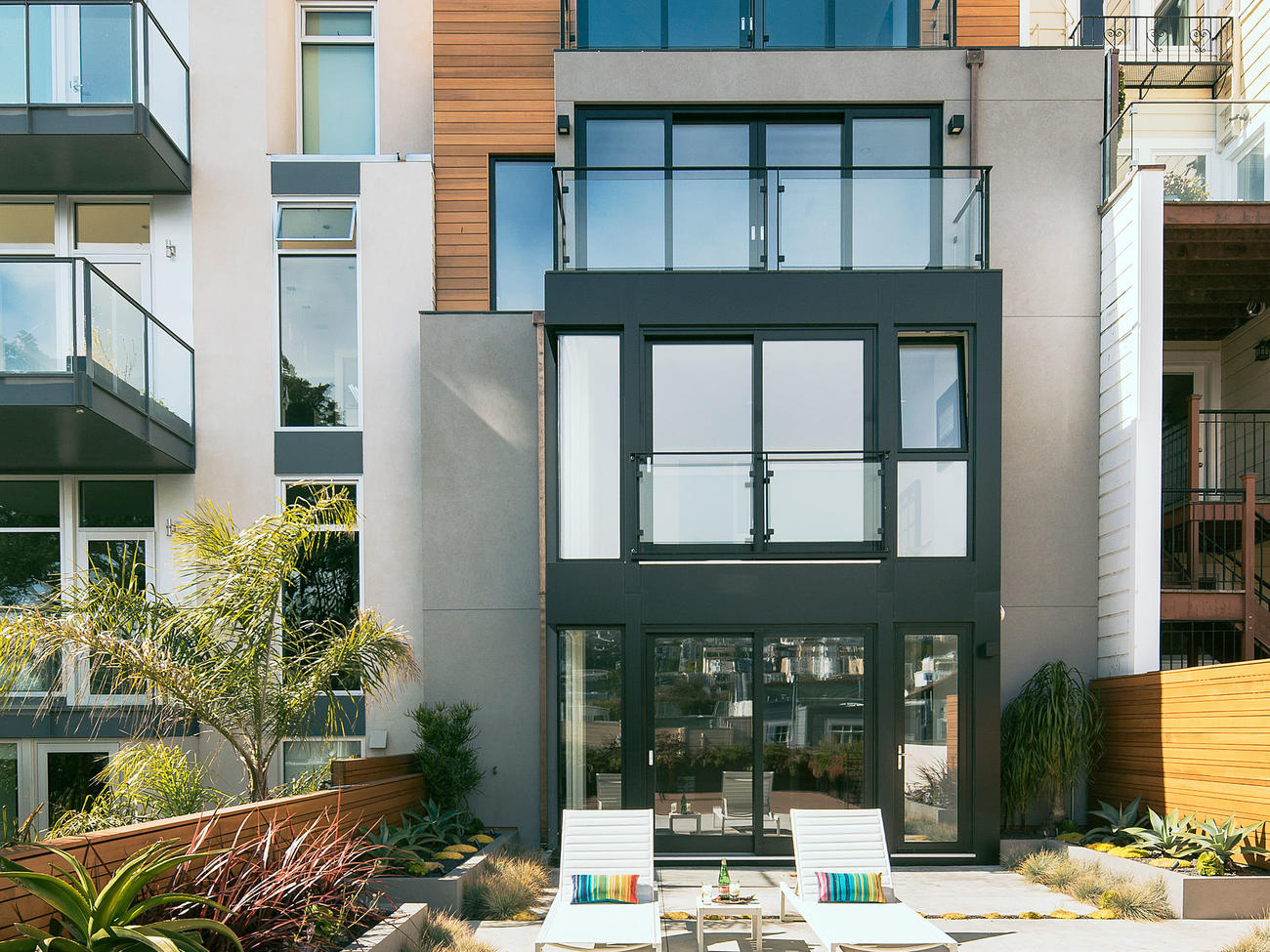 A few years ago, Yatin Chawathe and Thomas Zambito hadn’t even heard the term “passive house.” But when they saw plans for one under construction in the Castro neighborhood, it met their wish list—great views, modern architecture, energy efficiency, and room to raise a family—so they did what any modern couple would do before deciding to buy: They Googled it.

Their search turned up a lot of information on passive homes, but the most useful result led them to a Seattle man who owned one. He assured them it was the most comfortable home he’d ever lived in.

Chawathe and Zambito didn’t need much convincing. “We really liked the idea of a low-energy house,” Chawathe says, “and this went so far beyond that.” Other than cautioning anyone doing exterior work on the house to not puncture the home’s insulation seal, the only difference the couple notices with previous houses they’ve owned is their rock-bottom energy bill.

Back exterior. The four-story residence was the first passive house sold in San Francisco. Builder Ewen Utting took on the project in part to prove to colleagues that a market exists for ultra-efficient homes. The home is also built to LEED Platinum standards.

Bathroom. The glass shower enclosure, large-format tile in black, and chrome fixtures give the master bath the modern sensibility Chawathe and Zambito wanted.

Master bedroom. “The sheer urban nature of the city was a big draw for us,” Chawathe says of the view from the master bedroom. “I wanted to wake up every morning and be reminded that I live in a dense urban environment.” Despite being in the thick of it, Zambito says, the house is completely silent—no sirens, no hum of central cooling—when the windows are shut, thanks to the thick insulation and triple-paned windows.

Kitchen. To maintain the home’s airtight seal, the kitchen’s range hood doesn’t vent outside, which initially gave the couple pause. “We cook a lot of high-heat Indian food,” Chawathe says. “We worried the kitchen would turn into a cesspool of spicy, humid air every time we cooked.” But their worries were unfounded: The ventilation system quickly clears the air.

HOW A PASSIVE HOUSE WORKS

Well-calibrated insulation. Proper insulation is crucial in achieving the near-perfect efficiency of a passive home, Utting says. The level of insulation (and the thickness of the walls required to hold it) is decided using an algorithm that takes into account factors such as the home’s square footage and the local climate. The colder it is—say, in Alaska, where at least one passive home has been built—the thicker the walls.

A tight seal. Although the construction techniques used for a passive house are essentially the same as for a typical home, builders have to be at the top of their game, sealing every hole and seam to make the house airtight. “That’s the passive house approach: Give nothing away,” Utting says.

Few thermal bridges. In a typical home, heat and energy escape 24/7 through the walls, windows, and doors in places called thermal bridges—and you won’t find many in a passive home, Utting says. Triple-paned windows and extra-thick doors (with impeccable seals, of course) prevent air and energy leakage. Want to open a window? Do it: A single open window won’t affect the house much because there’s nowhere else for air to leak to or from.

Solar integration. The next feature is common sense: Passive homes are sited to make the most of solar power. In this house, Utting designed an awning above the south-facing windows on the top floor. “The windows are shaded in the summer when the sun is high to prevent the house from getting overheated,” he says. “In the winter, the sun is lower, so it enters the house under the awning and heats it.”

A cooling and heating system. All of the above can reduce by about 90 percent the energy needed to heat the space. What makes up that last 10 percent? Believe it or not, you do. Body heat, plus the heat given off by appliances, TVs, and even lightbulbs, is all captured by intake vents. These vents are positioned in the warmest rooms—the laundry room, kitchen, and bathrooms—to capture tiny amounts of heat emitted into the air and send them to a Heat Recovery Ventilator. This device uses a heat exchanger to heat or cool incoming fresh air, depending on the season, before pushing it out into the living spaces.

How to Design an Ultra-Energy-Efficient Home