CES 2017: Samsung Says This Is the Best-Looking TV It Has Made Yet 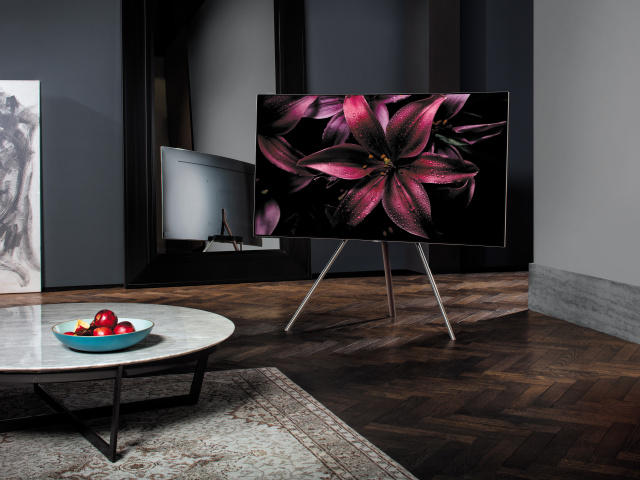 Samsung has unveiled what it says is the best-looking television it’s ever offered.

The tech giant at CES on Tuesday showed off its 2017 QLED TVs. The sets—which collectively make up Samsung’s Q series of televisions—use light-emitting diode and Quantum Dot technology to deliver their picture. Samsung calls the combined technologies QLED.

The QLED TVs are able to display accurate colors at any brightness level, the first for any Samsung TV. In a statement, Samsung said that the feature will allow users to see color differences with ease and ensure the color is accurate, regardless of how high a user has the television’s brightness turned up.

In order to deliver that feature, Samsung said that its Quantum Dot technology has been improved with a new metal material. Samsung noted that when brightness is turned up on a television, color accuracy, and detail is lost. Its new Quantum Dot technology, however, eliminates that trouble.

On the design side, Samsung said that its 2017 QLEDs are trying to solve the problem of cable clutter by offering a transparent “Invisible Connection” cable. All peripherals connected to the television will be routed through that cable to reduce messy wire concerns. The QLEDs are also compatible with a “no-gap wall mount” that sits flush against the wall and keeps the television as close to the wall as possible.

Those who want a mount can choose between the Studio Stand, which makes the television look like it’s sitting on an easel, or the Gravity Stand, which looks like a “contemporary sculpture.”

The Samsung 2017 QLED TVs will be available this year. Samsung didn’t announce pricing or availability at CES.

CES 2017: Samsung Says This Is the Best-Looking TV It Has Made Yet