The surrounding landscape is the star here. 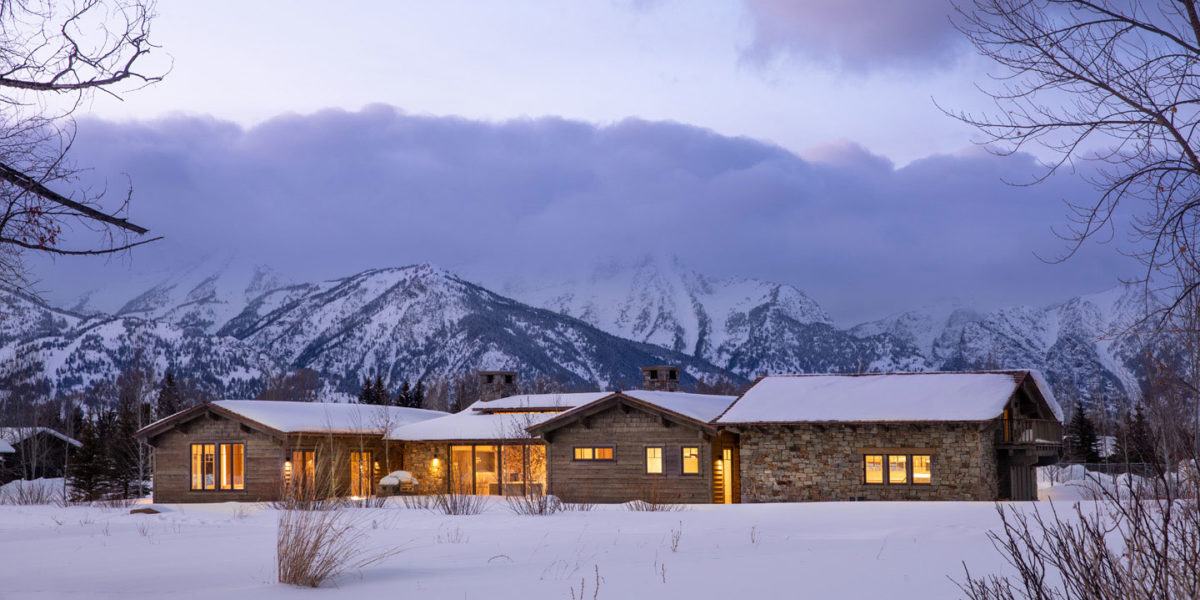 When you’ve got a blank slate with stunning views of the Grand Teton mountains, you’re pretty much obligated to take advantage of the scenery and incorporate it into the house design. You’d be a fool not to. And that’s exactly what Brian Messana and Toby O’Rorke, founders of architecture and design studio Messana O’Rorke, did with this new build in Jackson, Wyoming (the home is also featured in their first monograph, Messana O’Rorke: Building Blocks).

The pair were enlisted by Messana’s brother and sister-in-law to create the space—which is meant to be a vacation home. “They were drawn to the land’s rich natural surroundings and views of the Grand Tetons,” Messana explains. “Working within the constraints of community design guidelines, we were commissioned to design a house that feels at one with its rugged mountain setting and respects the traditional character of the neighboring residences, all without compromising the firm’s fastidious approach to space planning and form-making.” And while it might be a given to do an American lodge-style home given the Western, rugged setting, Messana says the clients wanted something more contemporary—a place for family and friends to gather, cook, and hang out.

The project had three challenges, Messana recalls. One, the property was located in a private community with strict design guidelines (roof pitch ratios, eave lengths, landscape material, window articulations, etc.), so the design team had to adhere to those while also balancing their goal of creating a thoughtful and distinct exterior. Second, the clients wanted the team to capture the magnificent views of the Grand Tetons and Sheep Mountain ranges. And third, the clients tasked the team with designing a house that would bring the outdoors in and the indoors out.

It was a tall order, but they got it done. The design they settled on honors both the surroundings and history of the area, but has a modern and contemporary touch. “Inspired by the humble vernacular residences of nearby Mormon Row—a late-frontier Wyoming settlement built by members of the Church of Latter-Day Saints—our design straddles the 19th to 21st centuries, resolving the potentially contradictory demands of contextual sensitivity and contemporary brio,” Messana says.

And those beautiful natural surroundings were a major factor in every design decision. “Our goal was to frame the views and manipulate sight lines to heighten the drama of the scenery,” Messana explains. “We incorporated massive pocketing glass doors in the kitchen and living room to open the interior to the surrounding landscape and views. Our clients are from Southern California, they love the outdoors and wanted the design of this house to reflect that strong connection.” The design team let the beautiful Wyoming landscape speak for itself—that’s why you won’t find any “loud” architectural details and flashy materials in the space.

To lighten the visual impact of the 5,000-square-foot space, the team broke down the structure into four volumes connected by see-through glass bridges—Messana describes them as “independent pavilions.” To accentuate the individual identities of the pavilions, the house is variously clad in stained cedar and stone.

“The interior of the house is crisply detailed, in signature Messana O’Rorke style, with wide-plank French oak floors and vertical elevations of wire-brushed oak in a warm gray stain,” Messana says. “The juxtaposition of the two interior materials works in tandem with the cedar and stone combination on the exterior to lend an alternating rhythm to the assiduously distilled composition. Neither hopelessly nostalgic nor aggressively contemporary, the house rests on the land with probity and grace, bridging the past and present life of the American West.”

The center of the house has the great room, which includes the living, dining, and kitchen areas. It’s a perfect spot for entertaining, which the homeowners love to do. “The kitchen is designed to be the center of the great room where you can see towards the Grand Tetons and back towards the outdoor dining,” Messana says. “Ann [the homeowner] loves to cook so it was very important that it be functional and aesthetic.”

As you go throughout the house, you’ll notice the primary suite, which contains not only a bedroom, a bathroom and a closet, but also the gym and spa (including a Jacuzzi, steam/shower, and sauna). The other areas of the home feature two identical guest rooms, a den/media room with a large U-shaped couch, and a guest suite with kitchenette above the garage.

Outside of the home is a firepit beside a reflecting pool at the front of the house—an ideal spot to appreciate the setting sun reflected on the mountains, adds Messana. Opposite of that is a courtyard with an outdoor kitchen and dining table.

“The homeowners absolutely adore the house we designed for them,” Messana says. “Functionally, spatially, programmatically, and aesthetically we exceeded their expectations creating an incredible environment to live and host their family and friends.”

They Bought a House for Its Surf-Friendly Location, But Its Layout Left a Lot to Be Desired—See the Stunning Remodel