The Best Apple Trees to Grow in Your Home Garden 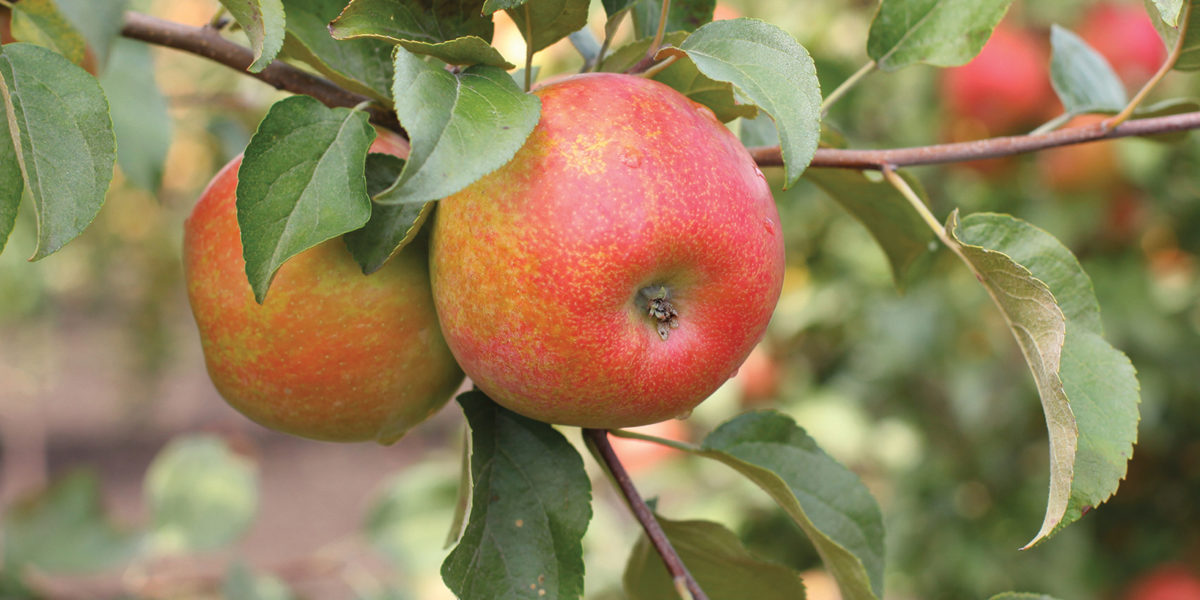 It’s hard to think of fruit trees in the Pacific Northwest without thinking of apples (Malus domestica)—certainly Washington State claims them as their state fruit, and they are one of the state’s largest industries as well. Descended from wild apple trees in the mountains of Kazakhstan, today’s apples come in a wide variety. The USDA Plant Genetics Resource Unit in New York State has an orchard with 2,500 different apples, though it’s said that there are more than 8,000 varieties of apples grown worldwide, with more being introduced every year.

With such diversity, it may be hard to pick a single apple variety to grow. If you don’t already have a favorite, consider attending one of the harvest festivals put on by tree fruit societies in the fall that offer tastings of different apple varieties. Or organize your own tasting by purchasing a selection of fruit from a local farmers’ market, to make sure you find your perfect apple. Just remember to pick a tree that is suitable to the specifics of your climate; in the Pacific Northwest there are many to choose from.

A medium-size apple with juicy, crisp flesh and red-streaked skin, ‘Akane’ was developed in Japan, a cross between the American ‘Jonathan’ apple and the English ‘Worcester Pearmain’; it is sometimes called ‘Tokyo Rose’. An early harvest variety, ‘Akane’ comes ripe in late August and early September, with gradual ripening so that the harvest can be picked over a number of weeks. ‘Akane’ is a reliable producer and begins bearing fruit after only a few years, but the fruit size may be small. Be sure to thin the blossoms in late spring to encourage larger fruit and better flavor. ‘Akane’ blooms in mid- to late spring, but it is self-fertile and does not require a pollination partner. Like most early crop apple trees, ‘Akane’ does not store well, but the sweet, sharp flavor makes for an apple that is excellent for eating fresh, juicing, and drying. Hardy for Zones 5 to 9; requires 800 chill hours.

Discovered in Oakville, north of Chehalis in Washington State, this is a true Northwest apple. Descended from ‘Golden Delicious’, ‘Chehalis’ has green-yellow skin that blushes pink, and juicy flesh that is crisper than its ‘Golden Delicious’ parent. Good for eating fresh, cooking, drying, or juicing, ‘Chehalis’ has a slight honey flavor. These late-harvest apples are tart early in the season, quickly ripening to sweet in mid- to late September (it’s recommended to harvest slightly underripe). ‘Chehalis’ is a medium storage apple and will last about 3 months if refrigerated. It has strong disease and scab resistance and is also self-fertile, so it does not require a pollinator. If you like the sweet honey flavor of ‘Golden Delicious’ but want a crunchier apple, ‘Chehalis’ would be an excellent pick. Hardy for Zones 5 to 9; requires 800 to 1,000 chill hours.

One of the most widely recognized apples, ‘Granny Smith’ is also self-fertile and does not require a pollinator (though it will bear more fruit if one is nearby). It hails from Australia, where it was discovered in the 1860s sprouting from the compost heap of Maria Ann “Granny” Smith. Known for its thick, glossy green skin and juicy, tart flesh, ‘Granny Smith’ is excellent for fresh eating, cooking, drying, and also for making cider. With impressive storage capacity, ‘Granny Smith’ can last up to a year, which makes it a reliable presence in the produce section at the supermarket. The tartness of ‘Granny Smith’ helps its reputation as a baking apple—they are ideal for pies, where they hold their shape well. Requiring only 600 chill hours, ‘Granny Smith’ does well with long summers and is suitable for warmer areas of the Pacific Northwest. Hardy for Zones 6 to 9.

Though a relative newcomer to the apple world, ‘Honeycrisp’ has won fans far and wide with its remarkably sweet flavor and trademark crunch, which it maintains even in storage. The medium- to large-size fruit is streaked with red and light green, and the tree sets a large crop, so thinning will be required. Developed by the University of Minnesota and released in 1991, it has quickly become a favorite of backyard growers and market shoppers (commercial growers have mixed feelings, as the juicy apples are hard to harvest and ship without bruising). Excellent for fresh eating, ‘Honeycrisp’ is a late-season apple, ripening in early September, with medium storage life (3 months or more). ‘Honeycrisp’ needs another apple nearby for pollination—almost any other late bloomer will do. ‘Honeycrisp’ is a good choice for colder climates, as it was developed to be cold hardy (Zones 3 to 8), but can thrive in warmer climates; requires 800 to 1,000 chill hours.

Developed in the 1960s, ‘Liberty’ is a McIntosh-like apple with white flesh and dark red skin. Favored for its disease resistance, ‘Liberty’ pro- duces heavy crops of fresh-tasting fruit that stores well, is good for both baking and eating fresh, and makes a lovely pink applesauce if you don’t remove the peels. ‘Liberty’ is such a heavy producer that the apples generally need to be thinned (see page 111) to avoid producing a large crop of rather small apples. ‘Liberty’ is considered a foolproof apple and often recommended as an ideal first tree for novice growers. ‘Liberty’ needs another tree for proper pollination, but since it blooms in the middle of the season it can be pollinated by many other varieties—‘Granny Smith’, ‘Cortland’, ‘Spartan’, or ‘Jonathan’. Hardy for Zones 4 to 8; requires 800 chill hours.

‘Macoun’ is another apple cultivar that descends from ‘McIntosh’ and features many of its good qualities—sweet, juicy, with a good crunch. Developed in the 1920s at the New York State Agriculture Experiment Station, ‘Macoun’ is considered a dessert apple, but makes excellent fresh eating or can be used raw in salads or simmered down for sauce. ‘Macoun’ is an ideal apple for pies, as the flesh is firm and flavorful and the slices retain their shape. The skin is green, ripening to red and maroon. A midseason bloomer, ‘Macoun’ needs a pollinator, though any other midseason apple will work—‘Akane’, ‘Fuji’, ‘Gala’, ‘Granny Smith’, ‘Honeycrisp’, and more. ‘Macoun’ ripens late in the season, but it does not store well. Hardy for Zones 4 to 8; requires 600 chill hours.

‘Cripps Pink’, which is generally sold under the trademark name Pink Lady, hails from Western Australia and features creamy white flesh and yellow skin that blushes to pink. A good storage apple, ‘Cripps Pink’ has crisp, firm flesh with a tangy-sweet flavor and is favored for fresh eating and fruit salads, as the flesh resists browning. ‘Cripps Pink’ is self-fertile and doesn’t need a pollinator, but 300 to 400 chill hours are required. This is a late-season ripener suitable for areas of the Northwest with milder climates. Hardy for Zones 6 to 9.

With the ‘McIntosh’ apple as a parent, ‘Spartan’ features crisp white flesh and streaked dark-red skin. ‘Spartan’ produces heavy crops and may need to be thinned in order to produce larger fruit. Though it does store well, its crispness fades over time. ‘Spartan’ ripens midseason, usually in early October, and can be harvested gradually over a few weeks. ‘Spartan’ is good for fresh eating and cider; it is partially self-fertile, though it will produce better with another mid- to late-blooming apple nearby (‘Liberty’ is a good match). ‘Spartan’ serves as an excel- lent pollinator for other cultivars, such as ‘Jonagold’. Hardy for Zones 4 to 8; requires 800 to 1,000 chill hours.

A favorite early bearer, ‘Wynoochee Early’ produces yellow-skinned fruit that blushes red and ripens in late July and early August. Featuring firm flesh with excellent sweet-tart balance, ‘Wynoochee Early’ is good for fresh eating and beloved as a cooking apple—its thin skin almost disappears when baked or cooked down into applesauce, so there is no need for peeling. Remarkably scab resistant, ‘Wynoochee Early’ does well in coastal regions and features impressive storage capabilities for such an early apple (if stored well it will last until January). Another early blooming pollinator is required, such as ‘Chehalis’, ‘Liberty’, or ‘Spartan’. Of all the early ripening apples, ‘Wynoochee Early’ is considered the best. Hardy to Zone 4; chill hours unavailable.

*(c)2018 by Tara Austen Weaver. All rights reserved. Excerpted from Growing Berries and Fruit Trees in the Pacific Northwest by permission of Sasquatch Books.

All the Basics: Planting & Caring for Fruit Trees

Grow These Fruits and Vegetables in Your Garden