An architect and a gallerist curated a modern, rustic getaway where the real luxuries are thoughtful design, the absence of technology, and an abundance of time. 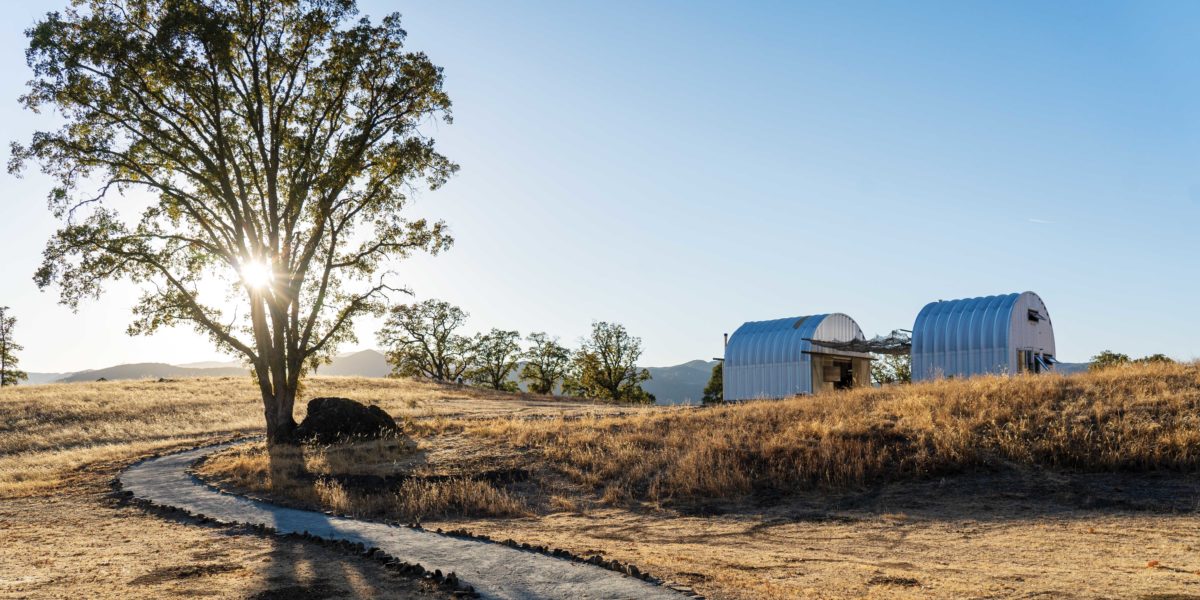 It’s easy to see why Hosfelt says that when you look out over the rolling hills and valleys of the property in Lake County, California, that he and his husband, Louis Schump, have transformed from a working walnut farm into a weekend getaway from San Francisco.

Timeless, or at least ancient, is one way you could describe the view from the deck: There’s no sign of any other home in any direction, no sound of traffic, just the rustle of a breeze through the grass. Coastal live oaks dot the hills. A striking boulder, moved here eons ago by glacial force, juts out of one hillock and is surrounded by smaller boulders and stones that have peeled off over time. Some of them line the winding paths that arc past the walnut trees, one serves as a step up to the deck, another is the floor of the outdoor shower.

Hosfelt runs Hosfelt Gallery in San Francisco. Schump is an architect at global powerhouse Gensler. Together the two creatives have curated a country getaway that is, yes, as old as the ages, but also entirely new. “We’re used to doing things custom,” says Hosfelt. “We’re willing to take chances and be experimental and are not interested in the conventional.”

The resulting second home combines agricultural vernacular references, a low-tech cabin vibe, vintage modernist furniture, lots of art, and just enough creature comforts to make it cozy while still feeling removed from the reminders of modern life. There’s no TV, no electricity, no Wi-Fi, no gas. Wood fire supplies the heat. Kerosene lamps illuminate the space at night. The wind is the air conditioner. Combined with the stunning natural setting, the property is a work of art in itself—a conceptual and spiritual practice that the term “country house” doesn’t quite accurately convey.

The path to this agrarian getaway began nearly 14 years ago when the couple started an exhaustive search for a second home within driving distance of San Francisco, tracing roads and exploring the coast and mountains of Northern California. On one of their early sojourns, Hosfelt saw a plot of land that contained the hallmarks of the prototypical California landscape of rolling hills and old oaks. He said to Schump: “I want to live somewhere like this.” Some six years later, the plot went up for sale and the couple bought it. And so began a very intentional, highly considered build-out of the 21-acre property. Bisected diagonally by a seasonal creek, the property has two halves: One is very flat with a working walnut orchard that serves almost as a sculpture garden in fallow months. The other is rolling grassland and those classic old California views.

One of their first projects was to build a small structure for their well, pump, and tractor. They settled on a corrugated modular building system called Steelmaster and created a barn while they studied the land and contemplated how to construct the main dwelling. They considered stick-built construction and shipping containers but liked their little barn so much they decided to use Steelmaster again. The upsides: They could enclose the largest amount of space for the least amount of money; any construction crew could execute the simple build; steel was relatively fire-safe. And, Hosfelt points out, it’s actually agricultural, and therefore authentically vernacular. The downsides: no insulation. “It’s a bit like living in a tent,” Hosfelt adds.

But that’s exactly the sort of detail that inspired Hosfelt and Schump to get creative with solutions that are both practical and artful: They heat the space with wood-burning stoves, including a massive Italian cookstove that not only provides roaring heat and cooked meals, but is also a handsome, brooding focal point in the airy steel space. Schump designed two Steelmaster buildings with a redwood deck in between. One building is the “cookhouse,” while the other is the “bunkhouse.” In the cookhouse, there’s a simple pegboard kitchen and an open living room filled with art and vintage pieces they’ve gathered over the years, including Bertoia and Jens Risom lounge chairs.

The bunkhouse comprises a bathroom, a sleeping loft, and the primary bedroom. Both structures have huge, rolling barn doors made of steel and polygal that open completely onto the deck, where in the summer a canopy of camo netting offers shade. The floor is painted white so that when all the walls are open to the air, the interior of the structure glows, picking up the sun in the day and the gleam of the lanterns and the stove at night.

Rather than build a driveway up to the dwelling, they intentionally set the parking area far from the main building to ritualize the arrival and shed whatever they came from: the city, or work, or traffic, or worries. They park near the barn where they first imagined a perfect retreat from the modern world.

“We unload the car into a wheelbarrow, trundle through the orchard, cross a footbridge over the creek, and follow a path that curves around an ancient oak and a huge boulder,” says Hosfelt.

At the end of the walk is their house and its perfect view up Bachelor Valley. “We arrive and are in a completely different world and state of mind.”

This Sacramento Stunner Is Built to Beat Intense Heat. Learn How They Did It on The Bay Area Modern Architecture Tour.