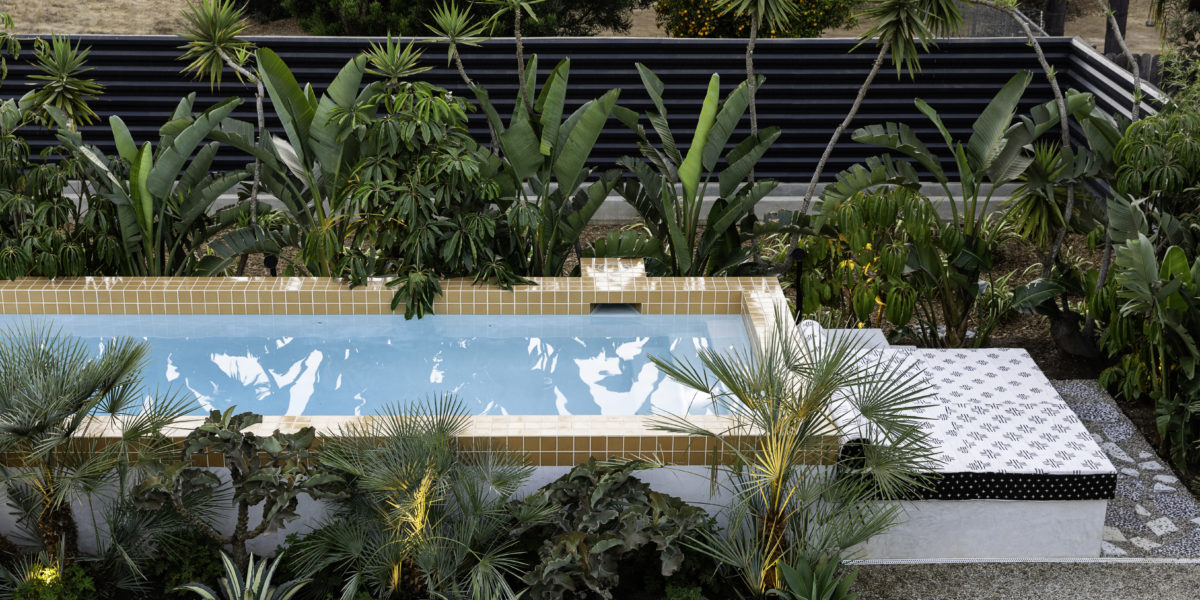 Jenny Siegwart
Hidden behind a boxy modern house in Leucadia that was recently remodeled by interior designer Sara Simon is a lush garden oasis with a unique above-ground pool.
Written by Christine Lennon June 21, 2021
Share this story

Sara Simon, a native Angeleno and the founder of Handsome Salt interior design, has the kind of design-forward bravada you need to pull off seemingly impossible feats. Like the time she made a north San Diego county beach house with an above-ground pool feel like it was teleported from Morocco.

“I was inspired by Moroccan riads, with a beautiful courtyard hidden behind a simple exterior. And I wanted to create that feeling of a great boutique hotel in the back yard. I think we pulled it off,” she says.

Simon and her husband Sven are a bi-coastal couple that buys and rehabilitates real estate. They’ve collaborated on homes, mixed-use buildings, a Malibu beach house, and co-working spaces. “But this is my first ground-up project,” she says.

“Sven is a real estate developer and his business partner lives in Encinitas. We were looking for a place to live near there, and he showed us this property that he owned nearby in Leucadia,” she says. “The house was a small-two bedroom, one-bath on a long, narrow lot. The front of the house was totally obscured by giant yucca and agave plants, and the backyard was just dirt and tumbleweeds.”

The location near the beach in a charming, old-California beach community was the big draw. But the house itself was not worth saving.

“At first, we thought we’d build an ADU in the backyard and outfit the main house as a smaller rental,” she says. Then, inspiration to transform the property into a single family home with a generous guest suite—and channel the desert oasis feel of traditional Moroccan homes—struck. The result is an open concept house with double-height ceilings and pocket doors that open to the back yard deck and pool area. Poured concrete floors, terrazzo bathrooms, and angular, boxy-feeling rooms give the house a kind of glamorous 1980s feel.

But the real star of the show is the pool.

Using poured concrete and simple Fireclay tile, Simon designed a sizable, white-plaster pool with a built-in sauna that’s flanked with built-in seating areas on both ends—one with a fire pit, and another designed as a lounge. It’s seven feet at its deepest point. “It wasn’t about trying to save money, or work with a steep lot, which is why many people go with an above-ground pool,” she says, of the traditional restrictions that prevent home-owners from digging a traditional in-ground pool.

The back of the house opens up entirely to the rear garden, which Simon planted with mature palms, bamboo, and yucca and agave that were transplanted from the front garden. She hired gardeners to water the plants and protect them from dust throughout the construction process. Mature plants are an investment, so it was a money saver, even if keeping them alive out of the ground for months required a bit of extra effort.

“The plants and trees are what give this garden the feeling that it’s been here for longer than a year,” Simon says. Her landscaping collaborator, Cheryl Kellough of Sage Garden Design in Calabasas, is a “landscape god,” Simon says. “She knows everything about plants. We walk through every project, and she sends me these gorgeous watercolor renderings. I work with her on all of our projects in California.”

“It was definitely hard to part with this one, but we sold it,” says Simon, who has learned not to get too attached to projects as she moves from one to the next. “The new owners love it. But for us, it just wasn’t meant to be.”

How an Ojai Ranch House Went from Ho-Hum to OMG (Hint: It Involves a Fiery Pink Door)