7 Reasons to Grow Succulents in the Drought

These easy-to-grow plants are the ultimate drought-resisters 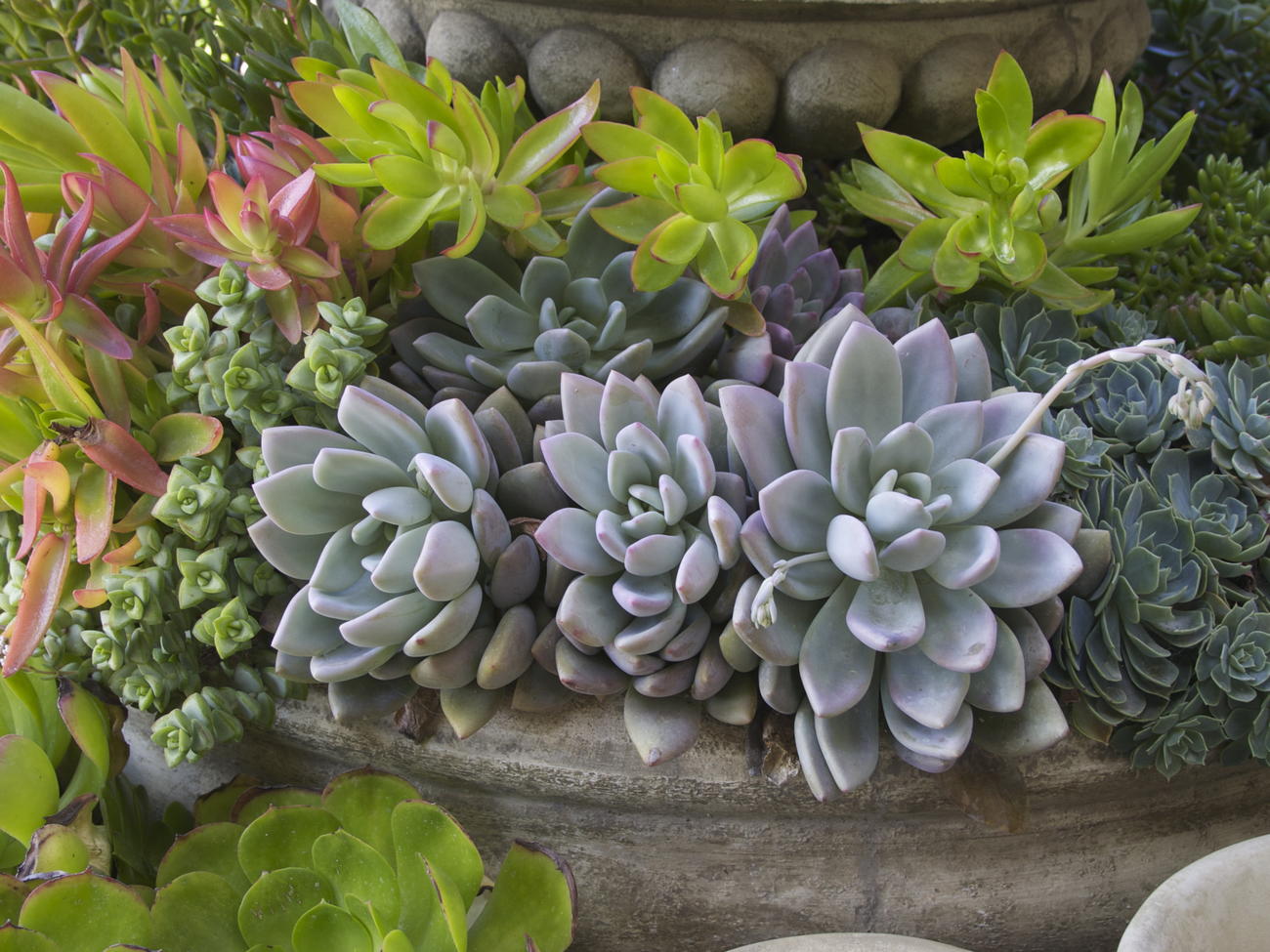 Photograph by Debra Lee Baldwin
Written by sunsunset31 November 2, 2017
Share this story
Succulents look gorgeous, even during drought. They’ve got their own moisture sources, says Debra Lee Baldwin, succulent expert and author of three books on the subject. Who needs water when you can fill a dry fountain with red-tinged Crassula ‘Campfire’, small frosty green C. rupestris, silvery Graptoveria ‘Opalina’, and blue-green Echeveria glauca? Seven more reasons to grow them now… 1. Succulents can create the illusion of water  We love this dry “pond,” which Lee Baldwin designed as a cooling focal point in her garden in Hidden Meadows, north of Escondido, California. Cactus pads mimic the “lily pads,” and Graptoveria rosettes form the blooms. Othonna capensis spills from the overturned jug above, while glass marbles scattered on the gravel sparkle in the sunlight. 2. They have built-in defense systems “These plants are all about surviving drought,” Lee Baldwin says of the succulents in this rockery, designed by Laura Eubanks. 3. The variety available is astounding “Most succulents look good all year,” Lee Baldzin says. “They’re endlessly fascinating, and they come in every color and size,” as shown in this garden designed by Laura Eubanks. Among Debra’s favorites: Agaves, Aloe brevifolia (which forms colonies), and Graptoveria ‘Fred Ives’, with pewter-colored leaves.   4. They can take most abuse, except from gophers  The Agave americana ‘Marginata’ in the photo above was about eight years old and five feet across when a gopher ate into its core from the bottom and hollowed it out. “This is the first time that a gopher went after my agave,” Lee Baldwin says. “An employee of Grangetto’s, the farm- and- agriculture supplier where I buy traps said it was likely due to the drought.” Hey, gophers get thirsty too. 5. Cuttings can live for years without water Lee Baldwin wired this cutting of Echeveria ‘Lola’ for a bouquet in June 2012. It survived without roots, water, or soil for nearly three years. “These plants can lose their roots and live off moisture in their leaves,” Debra says.  Here’s ‘Lola’ last week. She has been growing new leaves (from the rosette’s center, while drawing moisture from old ones. At any point, ‘Lola’ could have been planted, and formed new roots where those dry leaves are attached. 6. They’re great in dry bouquets In her workshops, Lee Baldwin combines the wired rosettes and cuttings with dried flowers and greens. Colored sand anchors her succulent bouquets, a subtle reminder that this is a no-water bouquet. These Echeveria ‘Azulita’ rosettes were wired for a bouquet six months ago. Unlike ‘Lola’, they’re putting their energy into producing roots (those red “threads” beneath the rosettes) rather than new growth, “hoping, like blind mole rats, that friable soil is close at hand,” Lee Baldwin says. 7. They’re good mixers Some succulents are not native to the West, but they coexist with unthirsty meadow grasses and perennials, even among oaks, and shown in Lee Baldwin’s own garden. And unlike for most plants, summer is a fine time to plant them; you don’t need to water them right away to get them established. Just keep in mind that when weather is hot and dry and the plants are actively growing, so they will need some water periodically. Related links:21 inspiring lawn-free yardsGorgeous low-water plants12 great drought-tolerant plantsTop 50 water-wise plantsBest ferns for a low-water gardenHow to create a sea-creature succulent gardenWater-wise garden design guideLose the lawn11 ways to fight drought