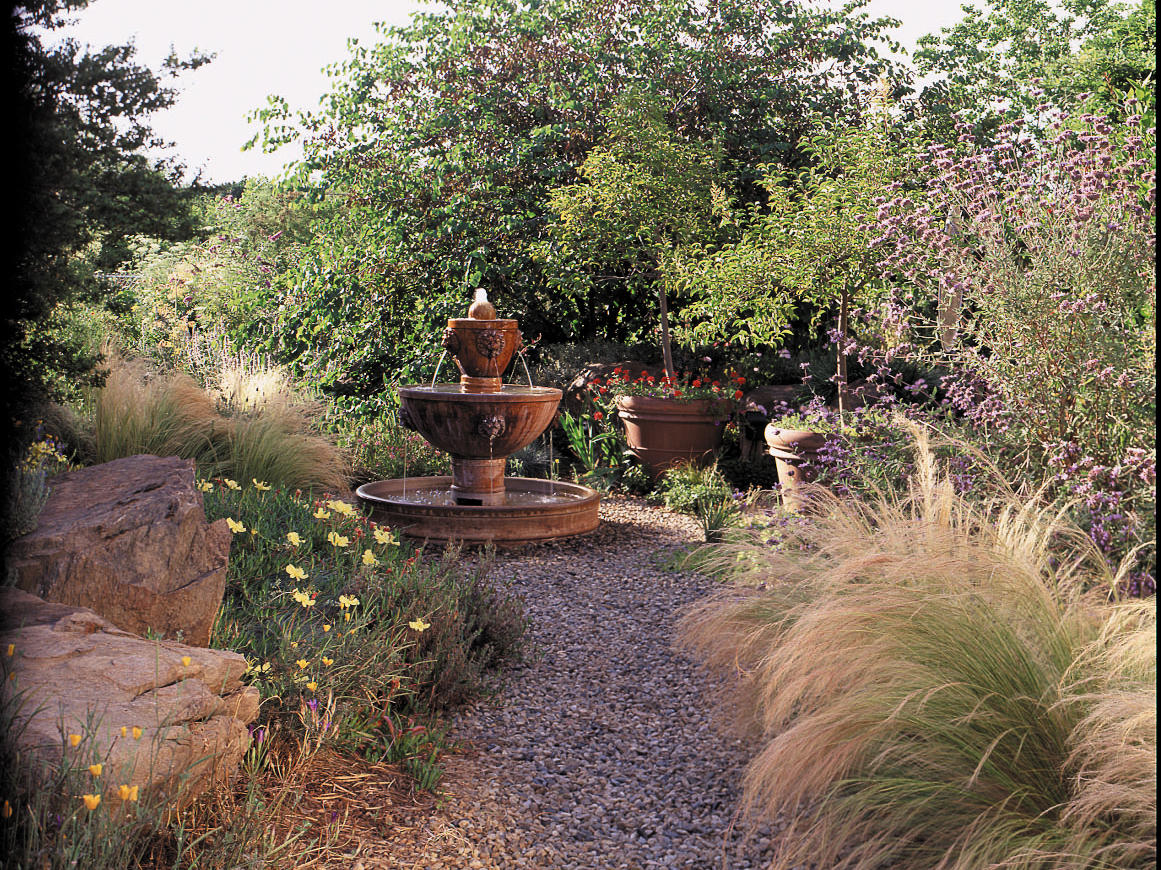 Style and practicality determined the design of this water-conserving garden in Clovis, California. For owner Claudia Kus, the distinctively Southwestern house style suggested a less thirsty garden to match. But the real issues ― a costly water supply, serious soil problems, and the hot, dry summers of the San Joaquin Valley ― were the clinchers. As in many areas of the West, water is precious ― a limited commodity. Kus needed to manage carefully the available water.

When she began to landscape her 3-acre property in the 1990s, she opted for good-looking plants that don’t need a lot of water once established. In the front yard, she planted drought-tolerant shrubs and flowering perennials. Throughout the property, Kus planted trees to create cooling shade ― Australian melaleucas, chitalpa, cork oak, desert willow, hackberry, and shoestring acacia among them. Near a fountain in the back garden, she planted acacia, chitalpa, and redbud. Grapevines ramble over an arbor around the back patio.

Before the landscaping began, a cementlike hardpan (an impervious layer of compacted soil) underlay much of the property. To make matters worse, a natural creek that ran through the property in winter was blocked so that it no longer drained. Instead of trying to break through the hardpan, Kus brought in 80 tons of topsoil, which she amended with homemade compost. In the backyard, she sculpted this new soil into curving mounds. Gravel paths between the mounds cover perforated pipes that carry away the excess water to a partially manmade pond in front of the house. (Pipes are buried 2 feet deep in trenches.)

Next: How to pick plants and save water

Choice plants from California and Australia

Three local nurseries helped Kus create an eclectic but stunningly beautiful mix of mostly drought-resistant plants. She worked with Planet Earth Growers in Fresno, which specializes in California and Australian natives, Intermountain Nursery in Prather, which specializes in native California plants, and Mountain Valley Growers in Squaw Valley, supplier of herbs. Kus kept plants that need more water, such as Japanese anemone and iris, closer to the house for an oasis effect.

More than 600 different species and varieties of plants now grow in this garden. Among the showiest are acacia, grevillea, melaleuca, olive tree, rosemary, and California natives such as ceanothus, manzanita, Matilija poppy, redbud, toyon, and four species of oak. There are native wildflowers, which reseed each year, a multitude of flowering perennials (including a diverse selection of salvias), and roses, ornamental grasses, and fruit trees.

To manage the little water available, Kus has an elaborate drip-irrigation system that includes more than 1,000 emitters and microsprinklers, operated by 21 valves and 2 automatic controllers. Among the many features of these state-of-the-art controllers is one that allows watering times to be easily adjusted to weather or water supply.

As automated as the irrigation system is, it still needs regular maintenance to deliver water efficiently. Cleaning emitters and repairing damage caused by rabbits and coyotes is a constant chore, but to Kus, it’s well worth the effort. All beds are mulched with chunks of redwood bark.

Water management tips from this yard