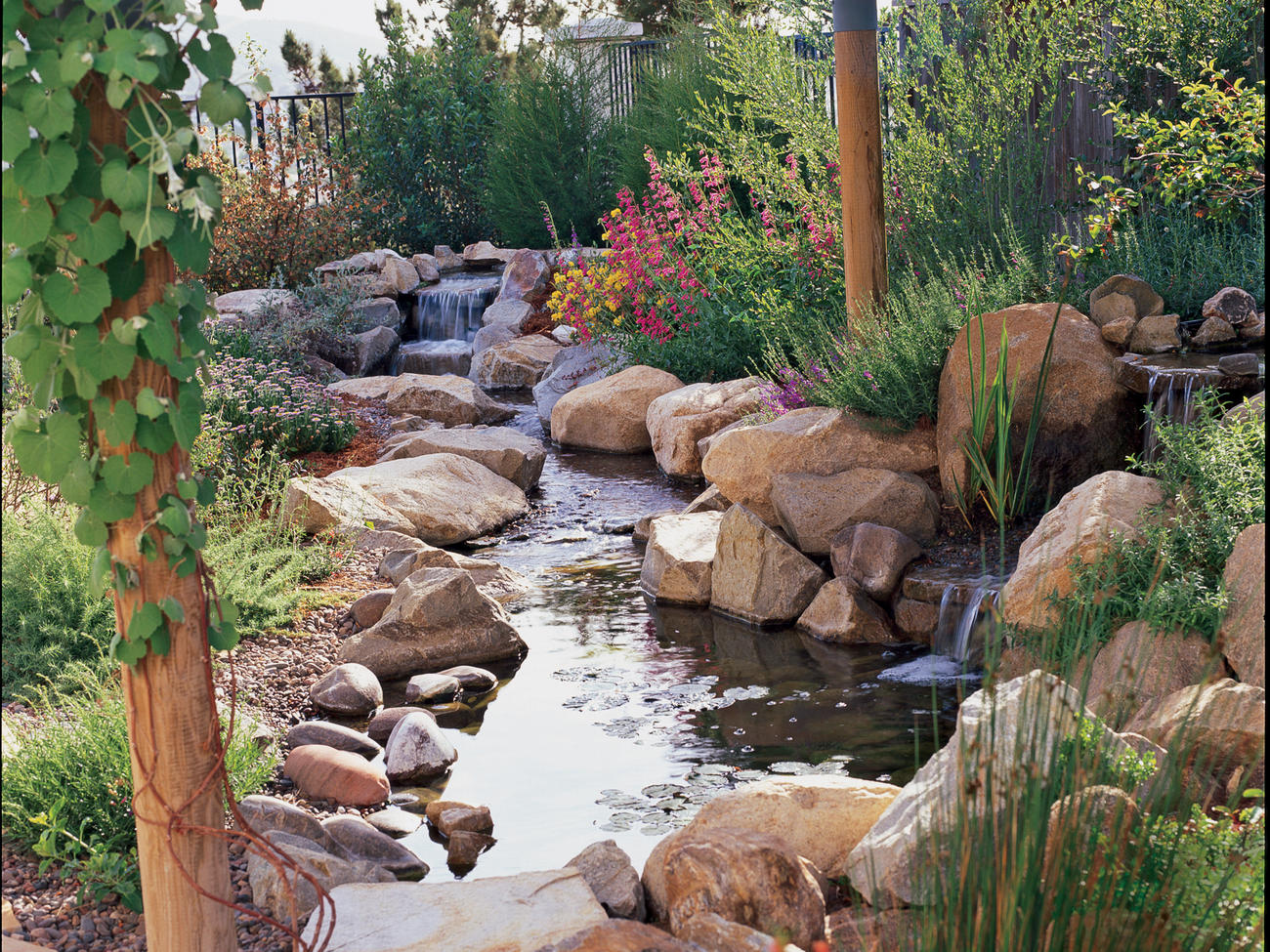 That’s what Mary and Joe Bochiechio found when they installed their garden in San Marcos. The couple, once “canyoneers” (volunteer naturalists for the San Diego Natural History Museum), spent many memorable hours leading interpretive nature walks in the backcountry.

But when illness made Mary quit volunteering, she decided to bring the wilderness into her own backyard.

For contrast, he added flannel bush, which covers itself in spring with bright yellow flowers, and airy apricot mallows, which produce long-lasting sprays of satiny orange, cup-shaped flowers.

In a side yard, Rubin used 30 tons of weathered granite boulders to create a dry streambed that segues into a preexisting recirculating stream. Along its borders, he planted sages and a sprinkling of deer grass; around the stream, he planted yellow and scarlet monkey flowers, pink penstemon, and blue lobelia.

To soften an arbor that shades and shelters the stream, he chose native California grape (Vitis californica ‘Roger’s Red’). The vine provides small, edible, seedy grapes that have a nice flavor. But, Rubin says, “the birds usually beat you to them.”

The Bochiechios’ native California plant garden attracts birds of all kinds: goldfinches, hummingbirds, quail, warblers, and dozens more that drop in to feed on grapes and nectar-rich flowers or to sip and bathe in the pond and in birdbaths placed around the backyard. (Shallow, water-filled depressions in some of the boulders serve as additional birdbaths.)

Because the native plantings, boulders, and dry creekbed that make up the two-year-old garden echo the look of the distant chaparral-covered hills, they visually extend the garden’s borders. Natural fencing, made of ocotillo canes, is sloped downward in places so it doesn’t block views. With their bottom tips buried in the ground, the canes put down roots and resprout, forming a “living fence.”

A California native, Mary fondly recalls how she and her siblings once played in an untouched canyon near their childhood home in Encinitas. “It was a wild, magical world,” she says. “We’d see rabbits, find coyote tracks, and come home with our hair tangled, smelling of sage.” Thanks to Rubin’s expertise, “the birds and shrubs in my own backyard let me savor the sights, sounds, and scents of my childhood.”

Not only is her garden a wildlife oasis, it requires minimal irrigation and, during wet years, can get by on rainfall alone. Now recovered from her illness, Mary is able to hike again, but her garden is all the wilderness she needs.

GETTING THE NATURAL LOOK

To give native plants the right setting, try the following tips.

Mix natives with other dry-climate plants.
Good companions for California natives include water-thrifty plants from the Mediterranean region.

Plant a living fence.
With their bottom tips buried in soil, ocotillo canes will eventually sprout leaves and flowers.

Use the right paving.
Decomposed granite is a good choice for native plant gardens because it allows rainwater to seep through to roots in winter.

Install a dry streambed.
Line a shallow trench with river rock of various sizes to suggest the flow of water.

Create a natural birdbath.
Bring in a boulder with a basin-shaped depression in its top and fill it with water.

To keep the water coming, thread a narrow drip tube through a curving piece of copper tubing and arch it over the stone (this also provides a handy perch for birds).

More:  Planting for birds and butterflies