How to Build a Chicken Coop

Get the free plans for for an ultra-stylish DIY chicken coop from the fantastic book of chicken coop designs, Reinventing the Chicken Coop 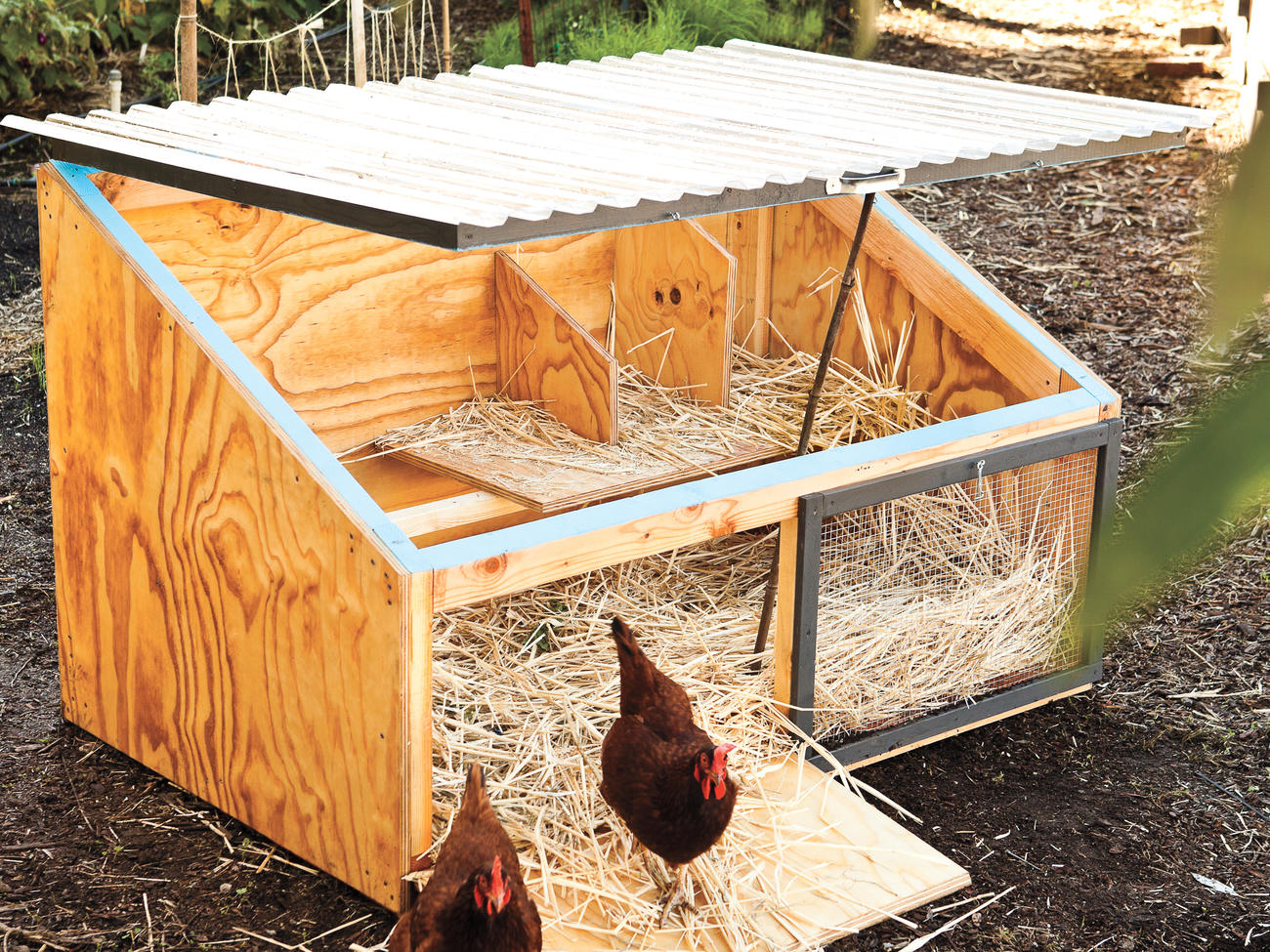 Written by Matt Wolpe and Kevin McElroy May 8, 2017
Share this story

The Icebox is named for its resemblance to a deep freezer. It was designed to be light enough to move around the garden and to be easy to clean. This is a small chicken coop, intended just for locking up the hens at night. The minimalist chicken coop design makes it easy to assemble in addition to being easy on the wallet. It’s also low to the ground, which makes it great for children to be able to participate in the chicken-raising process. If you build one, you should also have a bigger yard or run for the chickens to live in during the day.

The Icebox has many plywood surfaces to paint, so don’t be afraid to get creative with color and design. We used clear plastic corrugated roofing material to let more light into this backyard chicken coop. Without much effort, you could add windows or doors on the sides or back of the coop. The shape would scale up nicely: Double the size to build a large chicken coop that could easily house eight chickens. Or, mount it on 4×4 stilts to raise the coop up to a higher level for access and cleaning.

Draw out one of the plywood sides onto one sheet of ¾” plywood, and make the cuts with a circular saw or jigsaw. Use the cut piece as a template to trace the other side onto the remaining plywood so both sides are identical. You can use the opposing corner of the same plywood sheet to simplify the cutting. Cut out the second side piece. Save the plywood cutoffs for other parts of the coop.

2. Complete the side walls

Use the same technique to mark and cut the two vertical side pieces, using common 2×4 lumber and tracing along the top edge of the plywood. Scribe and cut the top piece to fit between the vertical 2×4s.

Install the 2×4s by drilling ¹⁄₈” pilot holes and screwing through the outside faces of the plywood and into the lumber pieces with 2″ screws. Do not screw near the corners of the plywood at this stage. Keep in mind the two sides mirror each other, with plywood on the outside.

Cut two common 2×4s and two rot-resistant 2×2s to length at 60″; these are the horizontal rails that run between the side walls. Use a table saw to bevel the top edge of each 2×4 top rail at 66 degrees.

The underside of the coop is completely covered with ½” wire mesh to keep predators out. On top of the mesh, the left half of the coop has a plywood floor, which is removable for cleaning or replacement.

Lay out and cut the floor panel from plywood. Set the panel in place on top of the bottom rails and floor support so its right-side edge is flush with the right face of the floor support. Fasten the panel with six 1¼” screws.

Cut common 2×2s for the roof frame: two front and rear pieces at 63″, one crosspiece at 60″, and two side pieces at 36″. Assemble the frame with one 2½” deck screw at each joint. If you’d like to paint the roof frame like we did, it’s easiest to do it now.

Check the completed frame for square, then reinforce each joint with L-straps (on the four corners) and T-straps (for the crosspiece), using 1¼” screws. Mount the roof frame to the rear top rail of the coop with three 3½” hinges.

Cut corrugated roofing panels to length at 45″. This length gives you 3″ of overhang at the front and rear of the coop. You can make the panels longer for deeper overhangs, but you want to make sure to have easy access to the handle on the front of the roof frame (see step 9). Install the roofing panels with roofing screws with neoprene washers (see page 26 for cutting and installation tips).

6. Enclose the front and rear

Cut a plywood back panel to size at 63″ × 36″. Install the back so it’s flush with the tops of the coop sides, using 2″ screws driven through the back and into the side-wall 2×4s and the top and bottom rails.

Cut plywood for the front door at 31½” × 17½”. Hang the door with two 2½” hinges mounted to the front bottom rail of the coop and the bottom of the door.

Cut a common 2×2 to length at 63″ for the roosting bar. Install the bar with one 2″ screw on each side, driven from the outside of the coop. The bar also serves as a support for the nesting boxes.

Construct the nesting boxes from the remaining plywood: Cut a shelf to size at 36″ × 18″, then notch one corner to fit around the vertical side-wall 2×4 at the right rear corner of the coop. Position the shelf on top of the roosting bar, and make sure it’s level from front to back. Scribe along the top edges of the shelf with a pencil to mark the shelf location onto the back and side panels of the coop. Remove the shelf, then drill 1/8″ pilot holes through the side and back panels 3/8″ under the scribed lines. Set the shelf back in place and fasten it to the roosting bar with 2″ screws. Then drive 1¼” screws through the back and side panels and into the edges of the shelf.

Finish the coop with paint or another exterior finish as desired, and apply two layers of clear coat.

Excerpted from Reinventing the Chicken Coop, text © by Matt Wolpe and Kevin McElroy, photography by © Erin Kunkel, used with permission from Storey Publishing.