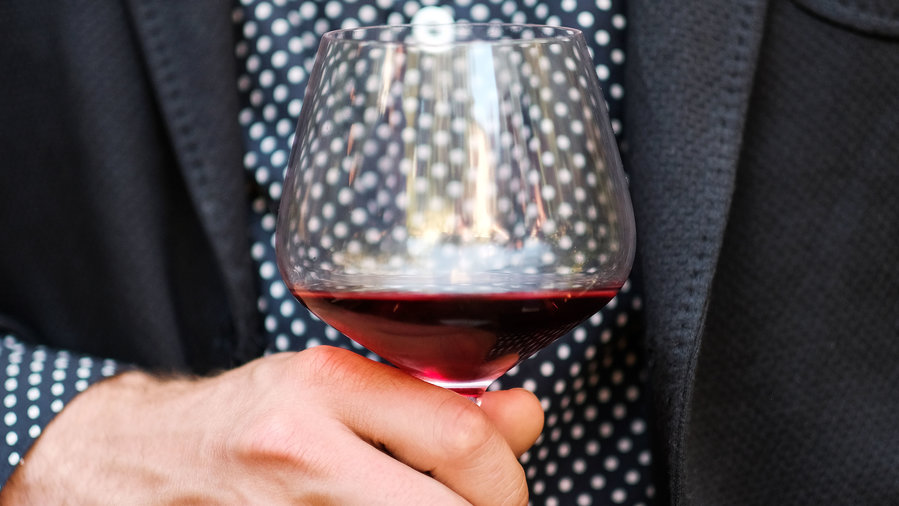 Thomas J. Story; prop styling by Bianca Soleto; food styling by Karen Shinto
Written by SARA SCHNEIDER, August 9, 2004
Share this story
“As long as I was in Iran or Chad, I was happy,” says Doug Tunnell of his early years as a foreign correspondent for CBS. But world events and compromises took their toll, and he had to extract himself from network news. Turns out it’s Oregon that makes him happy now. Tunnell grew up in the Willamette Valley, but he didn’t come home for a peaceful life; he came back to make Pinot Noir.

It takes great temerity to make Pinot in these parts. At the 45th parallel ― which happens to run through Burgundy, France, too, where the grape is made into some of the most elegant wines in the world ― the Willamette Valley produces barely enough hours of light and degrees of heat to ripen grapes.

It’s a dicey business every year. When the grapes make it, they have a chance of developing lush, complex flavors from that long, slow trip; when they don’t, the wine can be underripe and thin. As Tunnell explains, “Greatness has always come from the margins.” He seems to revel in being out on the edge at his Brick House Vineyards near Newberg. The Oregon way It’s a tradition here. The first winemaker to spot Willamette Valley’s potential for Pinot was David Lett. In the mid-1960s, against all advice from his former instructors at the University of California, Davis, Lett purposely planted Pinot Noir in this cool-weather climate. Research and instinct told him that wines could be grown here that would rival ― not mimic ― Burgundian Pinots. And in 1979, one of his Eyrie Vineyards Pinots came in second in a blind tasting against the best red Burgundies ― and that after coming in third on its first try just one year before.

The advice Tunnell ignored was his mother’s: “You’ve lived all over the world; why would you want to go back to Newberg?” She became hopeful when he informed her that he’d met an interesting prospect ― Melissa Mills, a local news anchor at the time (and now his wife). “That’s great ― can she get you a job at the station?” But Tunnell has job enough tracking some 20 acres of Pinot Noir, about 4 of Chardonnay, plus a little intriguing Gamay Noir ― and doing it all organically, a commitment to the environment he made as a boy, swimming in the Willamette River downstream from a couple of paper mills.

Surveying those acres with him on his little ATV, I couldn’t help asking, “But how much does a newsman know about growing grapes ― about what to plant where in the first place?” “Not much,” he grinned. “But see the sun on those slopes? I figured that would ripen the dark blackberry and currant flavors we get on this ridge. And the stand of evergreens south of the house? I thought that would deliver loamy, forest-floor flavors.” Tunnell’s instincts are borne out in a glass of his Willamette Valley Pinot Noir. The wine goes a long way toward justifying the pain in life’s old no-pain-no-gain formula. INFO: Brick House Vineyards (503/538-5136) is open by appointment. OREGON PINOT PICKS Oregon is now considered one of the top places in the world to grow Pinot Noir. Because it’s an extremely difficult grape to grow, however, the wine isn’t cheap. Archery Summit “Premier Cuvee” Pinot Noir 2000 (Willamette Valley), $37. Intriguing spice and menthol aromas and dense black cherry flavors. A Pinot built for red meat. Argyle Pinot Noir 2002 (Willamette Valley), $18. Light-bodied and earthy, with black cherry flavors and a hint of spice ― at an unbeatable price.