The mid-May report from our Colorado team, based in Aurora, near Denver. At 5,680 feet above sea level, its elevation poses challeng... 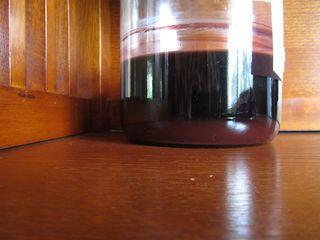 The mid-May report from our Colorado team, based in Aurora, near Denver. At 5,680 feet above sea level, its elevation poses challenges not faced by any of the other teams—including subzero weather in May!

As of early May, it was still cold and rainy in Denver, so our gardens were growing pretty slowly.  We do have news about our vinegar, chickens, cheese, and bees, though. 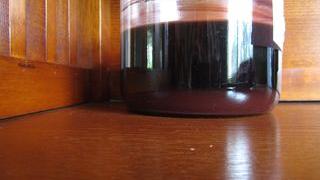 Even though we’ve had some rain, we’re still in a semi-arid climate. I started this red wine vinegar in mid-February. About a month ago I noticed how much liquid I had already lost to evaporation. Despite knowing that Acetobacter needs oxygen to work its magic, I covered half the top with plastic wrap, lest I have no liquid left. The evaporation slowed and when I took this picture last week, I noticed more cloudy bacteria in the jar.  I just hope there is enough alcohol left in there to turn into acetic acid—i.e. vinegar! 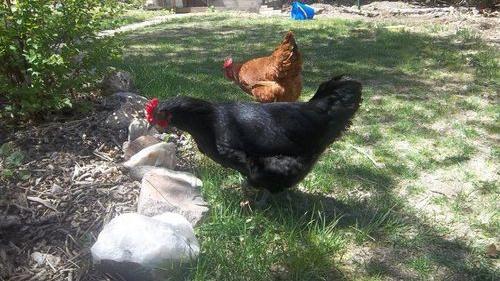 Sylvia (she’s the black one) and Tallulah hunt for grubs in the garden.

I switched to Romano from Parmesan simply because it has a shorter minimum aging time: five months, versus about eight for Parmesan. I used cow’s milk (sheep’s milk is what you’d use for a classic Pecorino Romano, but that’s pretty hard to find). 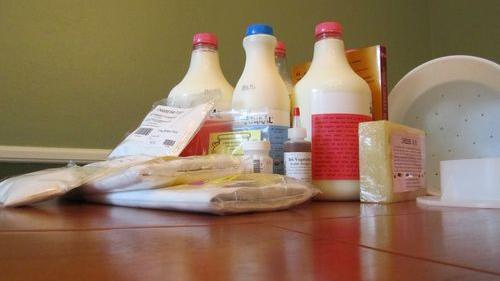 The starting materials for my Romano odyssey.
Note the bright light, indicating that it was DAYTIME.

Late, late that night (or early the next morning, depending on your preference for accuracy), I applied the final book (I mean weight) to my  improvised cheese press. 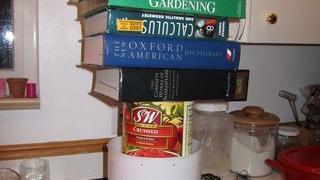 About eight hours into the cheesemaking, my husband said to me, “I hope it tastes good, but not so good that we want you to make it all the time.”

Although I’d sent the kids off with their dad that day so I could concentrate on the nuances of cheesemaking (heat milk slowly to 88 degrees; add the culture, then calcium chloride, then rennet; mix, but not too hard). I was still trying to separate my curds from whey when they returned home. Anna desperately wanted to help, so I let her cut the curds, and, as shown here, mix them with a whisk.

I tried to make ricotta with the leftover whey, but maybe I didn’t heat it enough. I got zero ricotta, which means I had to hit the grocery store so I could make veggie lasagna for dinner that week like I’d planned. 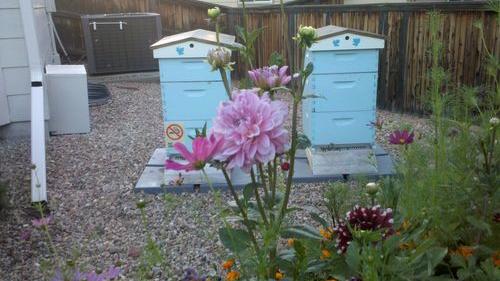 The two hives kept by David West, our team’s beekeeper, in his backyard in
Highlands Ranch, about 25 miles southwest of Aurora.

David had his hives on some rural property for a number of years, but the landowner (a friend) sold the land to Walmart. He says his bees are not quite as happy at his home as they were on the rural property—they don’t produce as much honey now. He’s already put in the queen excluder in one hive, but not the other, because one is a brand-new hive this year. It replaces the one that died completely after a -21° F night last winter. It was a sad day, but such is the risk you take when keeping bees in our climate!