With our new mushroom logs suddenly exploding with fungi, the members of Team Mushroom tackled the logs with sharp knives. It was easy and... 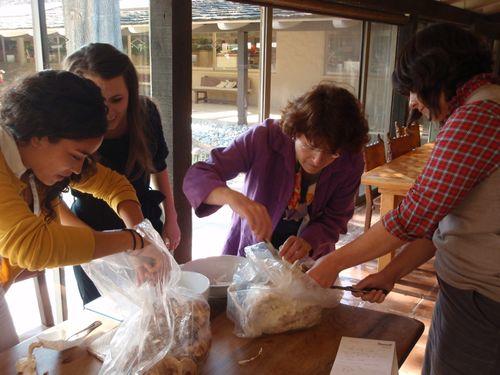 With our new mushroom logs suddenly exploding with fungi, the members of Team Mushroom tackled the logs with sharp knives. It was easy and fast–took us all of five minutes. 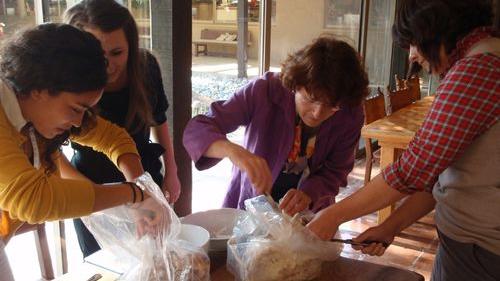 Shiitakes on the left, oyster mushrooms on the right. 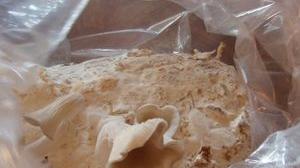 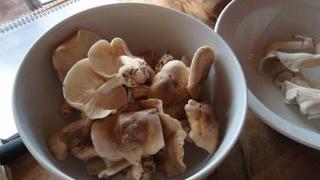 “They look like something out of Dr. Seuss!” said associate food editor Elaine Johnson. They were definitely the cleanest, most pristine mushrooms I’d ever seen. You could almost mistake them for porcelain, were it not for their fragile texture.

I cut up a few shiitakes and sauteed them in olive oil. 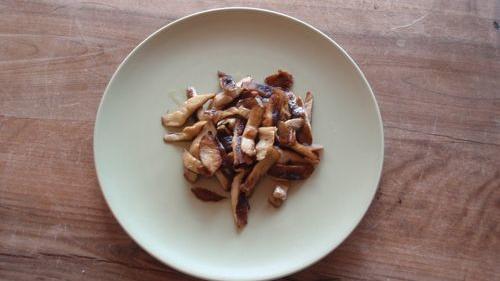 They were curiously fragile and tender, without the heft and chew I normally associate with shiitakes. Some of us loved them; others missed the meatiness. I suspected we’d waited too long to harvest the mushrooms, Their caps had opened so much that they looked like Victorian parasols.

I called Far West Fungi, the producers of the logs, and talked to sales manager Ian Garrone. He confirmed that we should’ve harvested them as soon as the caps had opened, when their edges were still rounded. An overly mature mushroom is soft, “like a really ripe banana.”As long as I had him on the phone, I thought I’d ask what the log itself was made of, since we’d all been wondering. The answer was surprising: basically, it’s the shroom itself. Here’s Garrone’s explanation:

Birth in a petri dish. Germinated mushroom spores are added to a petri dish of agar (a seaweed extract) and potato dextrose (food for the baby fungus). Within days, mycelium–the rootlike filaments that are the main body of the fungus; what we call mushrooms are merely the fruits–start to appear and form a white ring in the dish.

Adolescence in a Mason jar. The petri-full of mycelium is cut into wedges. Each wedge goes into a jar filled with red oak sawdust mixed with rye seed or red-oak seed, and the jar is chilled. The mycelium begins to run through the jar.

Maturing in a bag. The jarful of mycelium gets dumped into a bag of more sawdust and, this time, rice bran. Mycelium growth continues for another couple of weeks. “This is what we call your master spawn bag,” says Garrone.

Grown up and ready to fruit. A small bit of the master spawn is added to yet another bag of sawdust and rice bran and given lots of water. Now the mycelium really takes off, creating a spongy loglike chunk as it weaves through the sawdust. (Remember the last time you were walking on a nice, soft forest floor? That’s probably because mycelium were underfoot.) We received our log in the mail, and mushrooms popped out within a week.

This is exactly the method that Far West Fungi uses to grow its mushrooms for sale at farmers’ markets all over the Bay Area. Without even knowing it, we’re using what the pros use.

What can we expect from our log? It should give us two or three more “flushes” of mushrooms about four weeks apart–until the mycelium runs out food. Will it die? The brochure advises us to “retire it to your garden where it will enrich your soil.” I wonder if we’ll see a mushroom or two sprout from that spot. Hmmm. Hope so.

Before I finish, I’d like to introduce Team Mushroom’s new co-leaders: 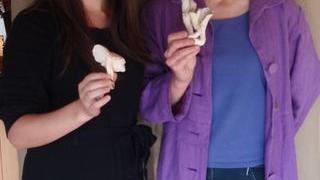