Team Found Fruit is barreling along on what seems like 10 cylinders. Check out their progress! After reading this, you may find your... 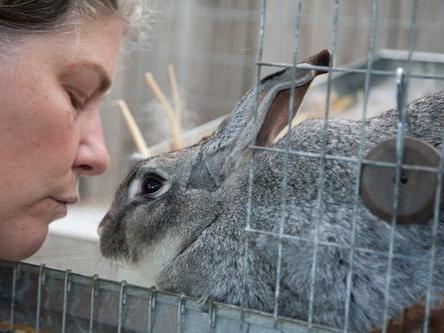 Team Found Fruit is barreling along on what seems like 10 cylinders. Check out their progress! After reading this, you may find yourself signing up for eel-catching lessons… 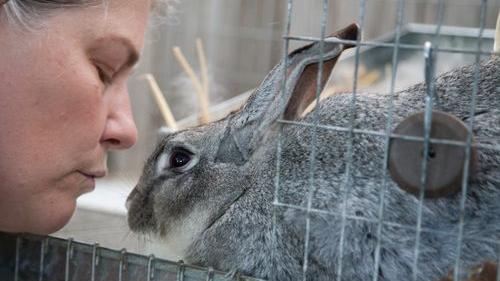 Kitty and one of her fuzzy charges.

Kitty, our bunny whisperer, has been busy raising rabbits for the feast. On a 4,000-square-foot lot in Oakland, she manages an efficient microfarm with rabbits, goats, ducks, chickens, quail, and bees. She raises the animals with love and produces nearly all of her own meat and most of her own vegetables. Her goats are trained therapy animals, and she enjoys taking them for walks around the neighborhood and to visit children in hospitals.

Nola, Jamie, and I took a stroll over to Kitty’s the other day and had a blast playing with the kids. The kids loved us as well. Go Team Livestock! 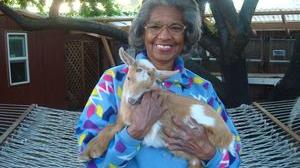 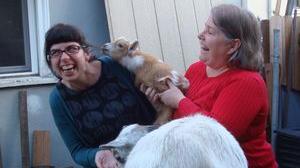 Nola (left) with a kid who thought Jamie’s hair was delicious (right).

With milk from her goats, Kitty produces cheeses, yogurt, ice cream, and more. She recently made a quick pressed cheese with honey raspberry–flavored walnuts added.  She’s an expert at cheddar, gouda, queso blanco, swiss, havarti, feta, mozzarella, and several other cheeses we’ve never even heard of. 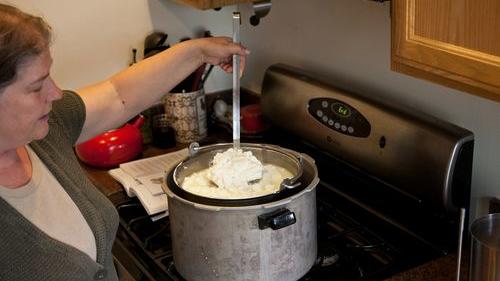 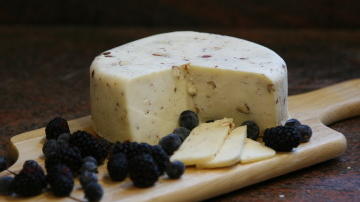 Team Chicken (for eggs) and Garden

Jonah, age two, is getting an early education in urban farming. He’s becoming an expert at planting seeds in the garden, and also likes to water and to play with the baby chicks that his parents,Todd and Kate, are raising. 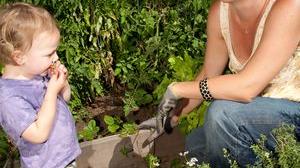 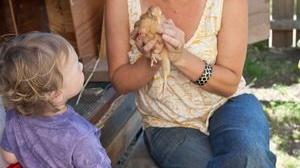 Starting with a dozen Rock Island fertile eggs from the supermarket and a heat lamp, Todd and Kate hatched one chick—Harry Potter (the others never hatched). Harry, along with a few Buff Orpington chicks from the local feed store (like the one in the photo above right), is now housed in a beautiful coop built by Todd, with a living roof covered in greens. However, it looks like Harry Potter won’t be laying eggs any time soon because it is becoming more and more apparent that he is indeed a rooster.

At our house, the garden has grown enormously, and we are enjoying harvests of chard, beets, carrots, edible flowers, herbs, berries, and salad greens. The peppers are plentiful, and the cukes and tomato plants are the biggest ever thanks to Nola’s magical compost. 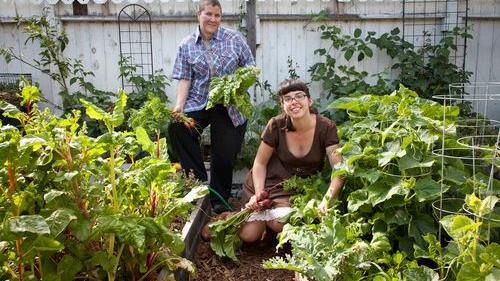 Michele (left) and Jamie in their garden.

Our front yard is an edible oasis of peas, beans, artichokes, blueberries, tomatillos, young melon plants, and more. It doesn’t look like we’ll get a great crop from the nectarine tree this year, but the pear tree is loaded with fruit. Across the street, Nola has a lot of fruit on her trees but we aren’t saving much of it because we all eat it as fast as we can pick it. 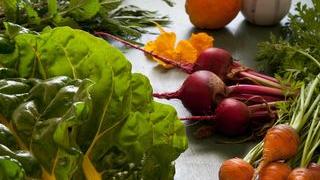 Kim and I, the fisherwomen that we are, have been out catching Dungeness crab, poke poling for monkey-faced eel, and netting surf smelt. It’s a bit dangerous at times, but totally exhilarating! For the crab, we use our fishing poles outfitted with crab traps (small cages). Each of the traps has lassos attached that snag the crabs’ legs. We stuffed the trap-cages with bait (squid and sardines) and them cast the lines just as you would if you had no lasso-laden cage attached. When you feel a tug, you pull the line, and the lassos close up—snagging the crab. Sometimes you catch 2 at a time! 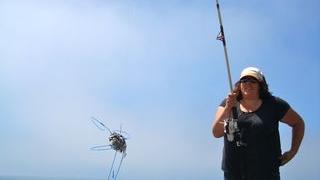 After taking Kirk Lombard’s fishing workshop on the San Francisco waterfront, we decided to try our hand at poke poling for eel. Kirk is the author of the Monkeyface (Eel) News, and you can sign up for his workshops through Forage SF. When Kim caught that first one, it was an outrageous scene. We were screaming and running around on the jetty while the eel slithered around on the line. And when I got to her with our bucket, already filled with hungry crabs, we realized that putting the eel in with them might not be the best idea after all…we managed to get it home separately, in a plastic bag, and it was delicious filleted and batter-fried. 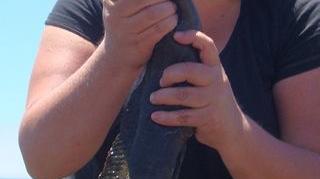 The monkey-faced eel in a tight grip.

Earlier in the month we went out night-smelting with an A-frame net. This involves standing in the waves and dipping the net into a crashing wave. You can see the smelt glistening in the light of the moon! For surf-smelt fishing (done in the daytime) we have been learning how to cast a Hawaiian throw net. Go Team Ocean! 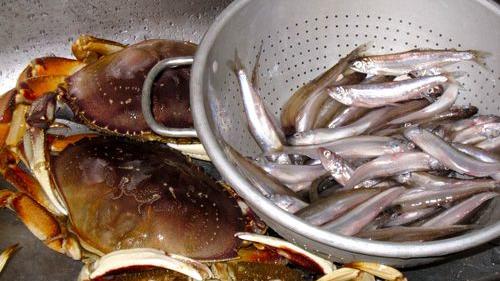 ‘Tis the season for morels, and Kitty has been foraging up a storm. (Kim and I also go hunting regularly throughout the winter for chanterelles and black trumpet mushrooms.) 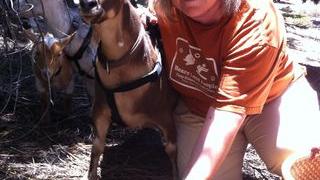 Kitty brings her goats along when she forages.
Check out the morels!

Through our friends at Far West Fungi in Moss Landing, we decided to try our hand at growing mushrooms. We had a fun road trip down there and returned with garbage bags full of logs inoculated with oyster, king, and shitake mushrooms. We built mushroom towers—similar to our potato towers but with wood shavings and straw packed in with the logs.The mycelium (the threadlike body of the fungus) spread through the new growing medium, and before we knew it we had mushrooms! 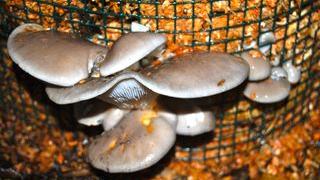 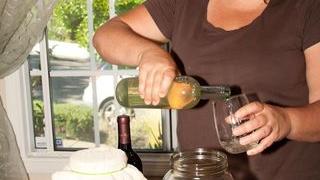 We also have plans to make a foraged blackberry and elderberry wine, which we’ve had luck with in the past. The foraged limoncello (lemon liqueur) and arancello (orange liqueur) are done, and delicious! We were recently gifted a 35-year-old sourdough starter from the Arizmendi bakery collective in Oakland. That, plus the kombucha, sauerkraut, and kimchee we’ve been making, has been great fermentation fun. 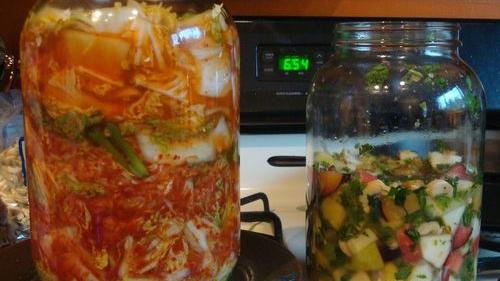 We even tried making a fruit kimchee (above right), but it is definitely an acquired taste…one I haven’t acquired yet. Go Team Ferment!

And lastly…Earlier this season, we foraged olives from the trees on the Mills College campus up the road. They’ve been brining for some weeks now and they are delicious. Here’s the method, in a nutshell. Use a saltwater mixture (about 1 part salt to 8 parts water).  Soak the olives at room temperature for 3 months before refrigerating, and replace the brine every 2 weeks—otherwise mold will grow. (It’s a type of penicillin mold, though, so not harmful.)  Then add a “finishing brine” that includes red wine vinegar and olive oil. 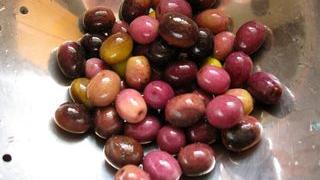 For more about Team Found Fruit and their larger objectives, see their website, www.foundfruit.com