I found a bunch of snails huddled together in the garden and scooped them up in my hand before the sole of my boot could get to them. Le... 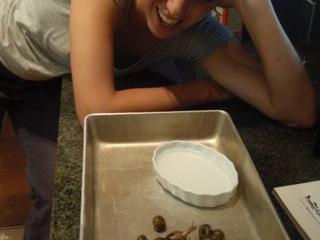 I found a bunch of snails huddled together in the garden and scooped them up in my hand before the sole of my boot could get to them.

Let the fun begin! I’m following Sunset’s instructions from 1988, and the first step is to purge them for at least 4 days. This clears their systems from any toxins that might be poisonous for human consumption.

Here I am, such a proud mother, checking them out in their new setup, complete with watering dish: 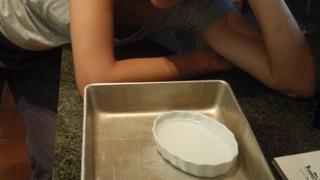 Their home will need to be cleaned every other day (but they’ll survive the weekend, don’t you think?) and then they can be fattened up by adding a few teaspoons of cornmeal. 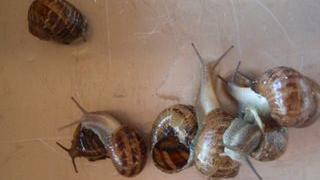 Clockwise from top left: Snaily, Shelly, Shelli, Chelle, Mishell, Rachelle, and Shelby(Hey – they named the chickens and, though they might be in denial,we will eventually eat them too.) 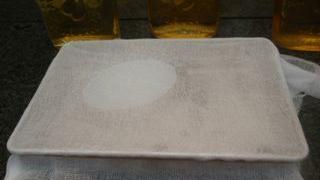 Last step: covered in several layers of cheesecloth and secured tightly with a rubber band.My favorite part of the Sunset article: “Check daily and discard any dead snails. Scratch the snail’s foot to check: if it doesn’t twitch, the snail is dead.” I never thought of their underside as a foot. I like it!