Our fellow corporate beekeepers at Google invited us over to take a peek at their Hiveplex and to watch their first honey extraction. Goin... 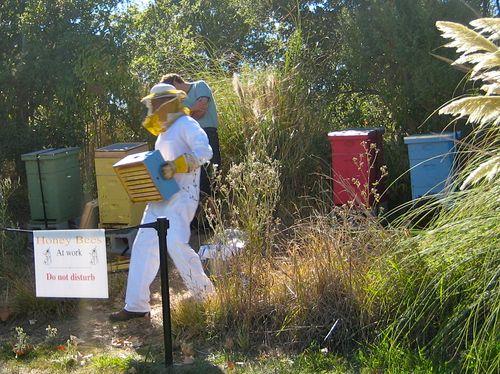 Our fellow corporate beekeepers at Google invited us over to take a peek at their Hiveplex and to watch their first honey extraction. Going to the Googleplex is always a treat.  It is essentially a playland for adults.  Many people can’t believe Sunset’s campus is a place of business, but we don’t have colorful bikes, ping pong tables, slides from one floor to another, or bands playing on Thursday afternoons.  Yet, our facilities have a few things in common with the Googleplex: beer, wine, and most importantly, bees. 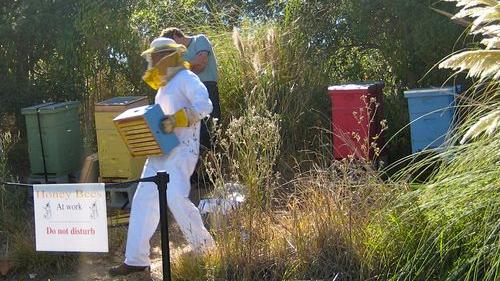 Fueled by concern about colony collapse disorder (CCD), Marc Rasic, Google’s executive chef, decided to head up the project, even though he had never done any beekeeping himself. This is Google’s first year with bee hives and they called in the help of Marin Bee Company to set up hives and consult for the club.  Eighty people have signed up to help care for Google’s girls, but only about 20 are regularly active members.  The Hiveplex consists of four 8-frame hives, each painted in one of Google’s colors, and with one captain per hive.

Google’s first honey extraction was open to any employee who wanted to learn more about the process and even help out.  When we arrived, Bill Tomaszewski of Marin Bee Company had already pulled frames from some of the hives, so we could start extracting immediately.  He brought with him common extraction tools: a hot uncapping knife, a capping scratcher, and a manual extractor, similar to the one we use (watch us extracting honey here).  He also brought a few fancy schmancy commercial beekeeping toys that would make any hobbyist beekeeper envious and make extracting a piece of cake.  My favorite, the chain uncapper (pictured below), is the Ferrari of uncapping tools and has a motorized 18-frame extractor.  The chain uncapper uses a rotating chain mechanism to perfectly uncap the cells in only a few seconds.

No scraping and no hand cranking… Now that’s my kind of honey extracting. 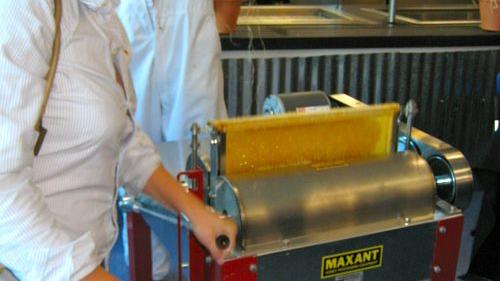 Nine honey supers later, Google estimated that they had extracted about 405lbs from their hives, meaning about 100lbs from each.  That is nearly unheard of for a first year harvest. We’d love to know their secret.  Everyone who participated was able to take home a jar and the remaining honey went back to the kitchen to be used in recipes for the staff.