By Rick LaFrenz, Sunset landscape supervisor There’s something exciting about billions of yeast cells converging on a sugary malt... 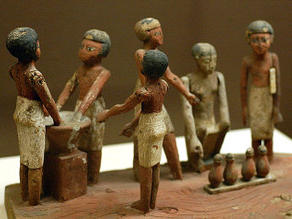 There’s something exciting about billions of yeast cells converging on a sugary malt solution and transforming it into a substance that has so much personality and history—or is it just me? 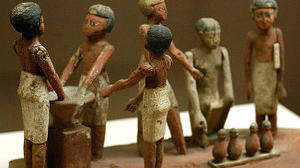 Who would have guessed that the mistake of leaving some grains in a vessel of water thousands of years ago would have led to the celebrated drink we know today as beer? (Photo of Egyptian wood model of beer making by E. Michael Smith, courtesy of Wikipedia Commons.)

Our One-block Diet‘s brew crew — Sunset editorial services coordinator Stephanie Dean, executive editor Dale Conour, managing editor Alan Phinney, and yours truly — met last week to decide what kind of beer to make and how to make it. Though Stephanie and I have each made beer, we both did so using a concentrated extract, instead of the traditional method of producing the beer exclusively from grain. Beer purists would argue that there is only one method, and that is from grain.

We decided to make two batches of beer. The first batch will be honey wheat, from an extract. If everything goes to plan, we will brew on Wednesday.

After some research (which may involve a trip to a local brewery to see how the big boys do it), we are going to attempt to make a beer from grains. This process is a bit more involved, time consuming, and requires more equipment. We will need controlled temperatures for the conversions of starches into fermentable sugars.

Stay tuned for some pictures of the brew crew in action. In the words of Homer Simpson, ‘’mmmmm beeeeeeer.’’