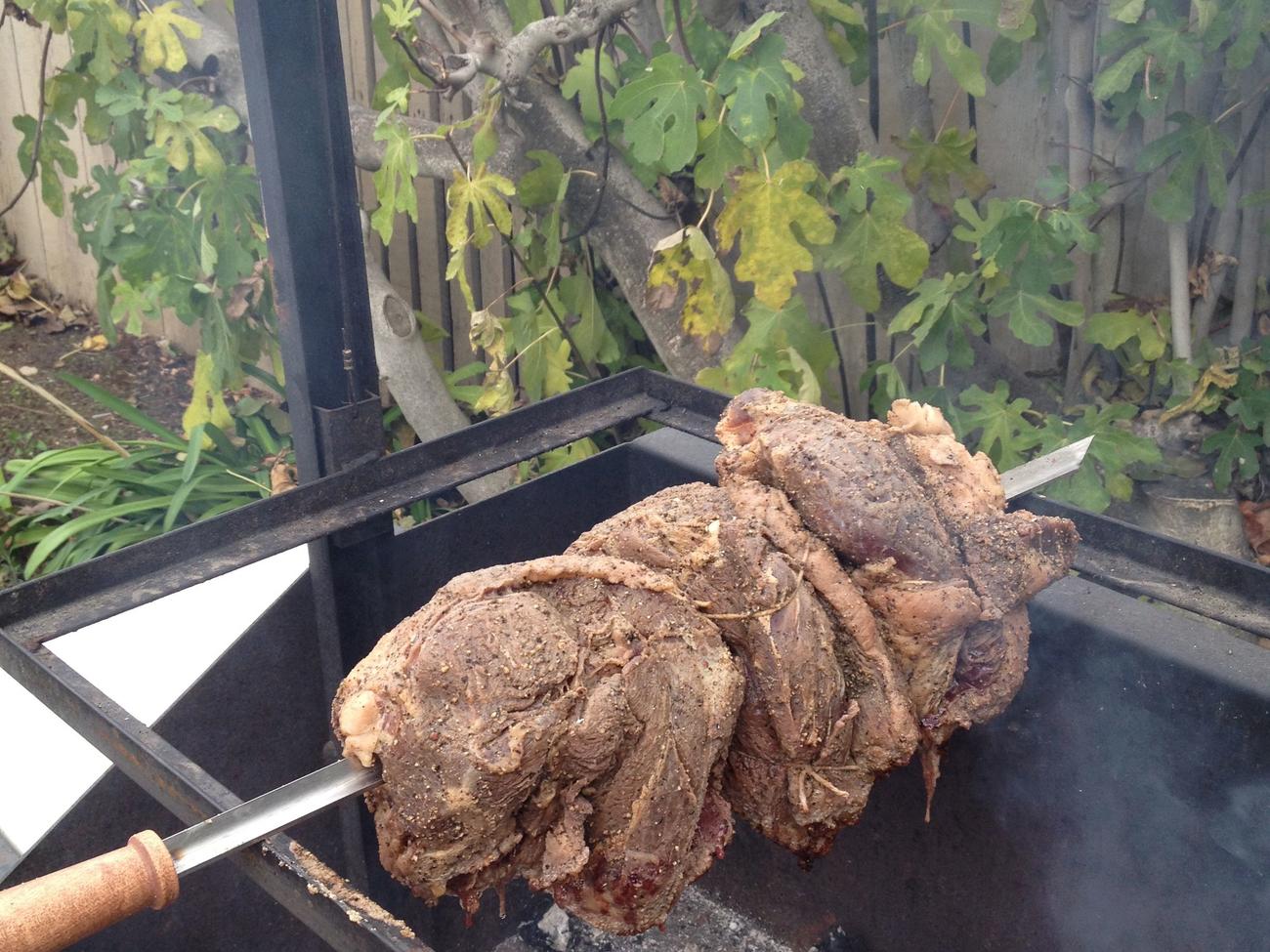 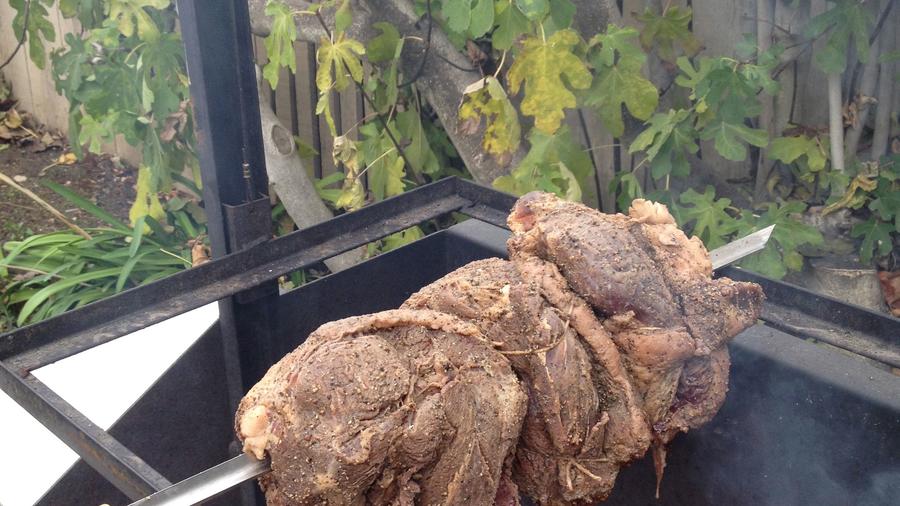 When I was reporting our August story about Santa Maria-style barbecue, master griller Ike Simas, of the Santa Maria Elks Lodge, explained that most home cooks don’t grill the way they do at the Lodge. He and his crew cram football-size hunks of top sirloin onto six-foot skewers and then set them over a log fire, and they feed hundreds of people at a time. “The old-timers taught me,” says Simas. That was 60 years ago, and he’s been barbecuing ever since. 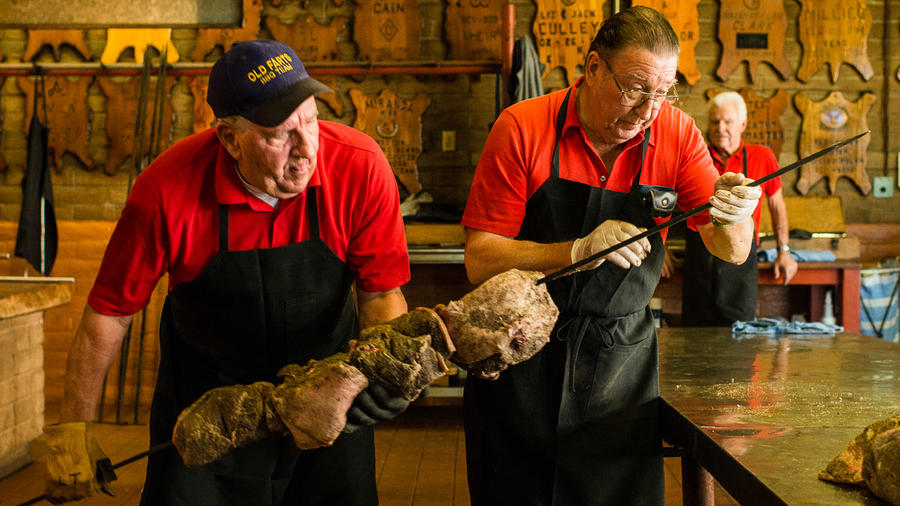 At home, Santa Marians grill their meat in thick slices, laying it on the cooking grate of their barbecues. It’s just easier. And it’s delicious—here is the recipe.

And yet, I haven’t been able to get the drama of the skewers out of my mind. So I decided to try it.

Within minutes, I found some nice big skewers on superskewer.com, long enough to fit across the metal frame of our Santa Maria–style grill. I settled on the Large Blade Churrasco Skewer (about $35), sturdy enough to bear its hefty cargo and angled to help keep the meat from spinning. 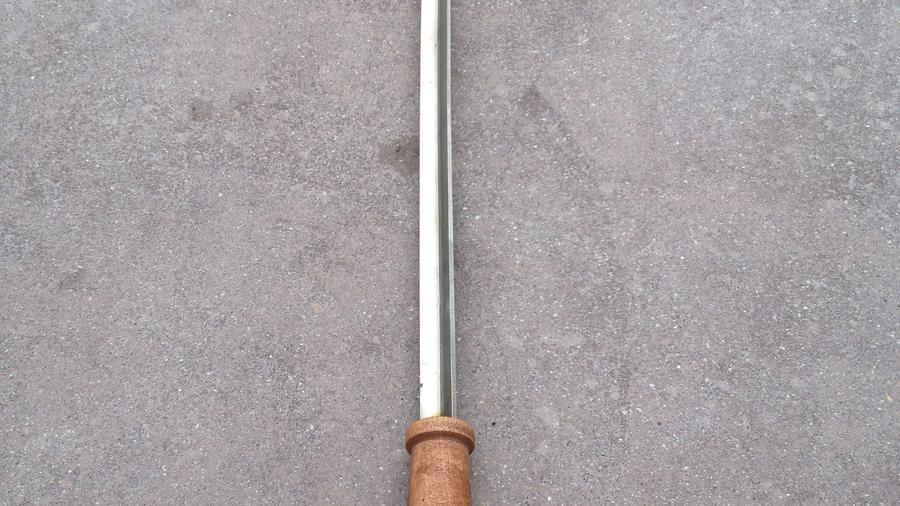 I trimmed most of the fat from a 14-pound top sirloin, and then cut it lengthwise into pieces 2 to 3 inches thick. Mighty! 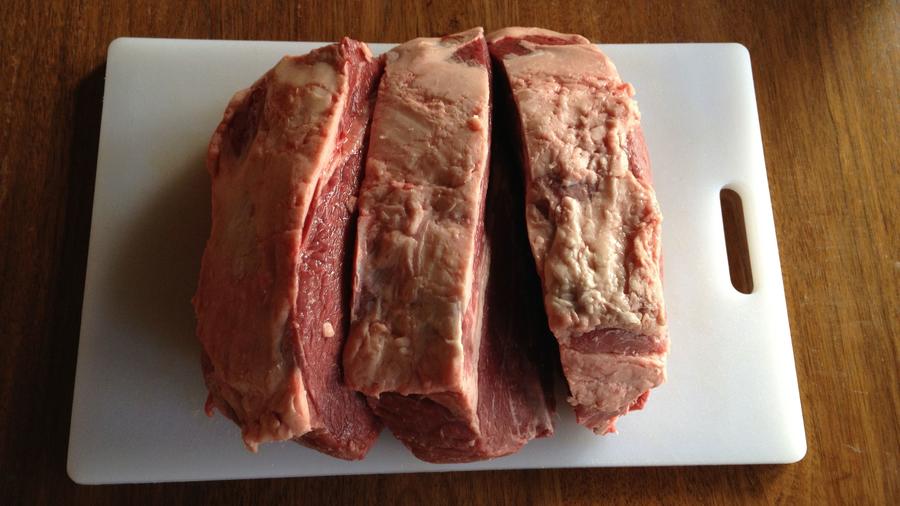 Then I rubbed each piece all over with an equal mix of salt, garlic salt, and freshly ground black pepper. I ended up using ¼ cup of each. 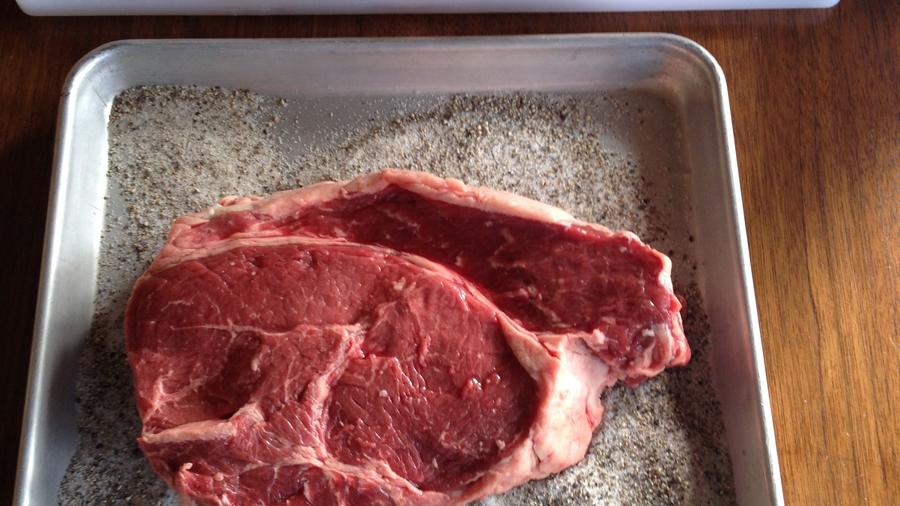 As the meat sat on the counter, absorbing the seasonings, I lit a fire of red oak logs (they impart a spicy-sweet flavor to the meat). After an hour and a half, the logs had burned down to steady, hot coals.

Surprisingly, it wasn’t hard to slide the skewer through the meat. I did have to tie up a couple of the chunks with twine, though—this particular top sirloin had a deep ribbon of internal fat that made it a little floppier than most. I was trying my best to bend each hunk into a neat C shape, and skewer them with the fat sides facing outward and alternating, so they’d baste each other—and then remembered Simas telling me: “You want to leave all the fat on, so it wraps over the rod and helps hold the meat in place. Otherwise you might get a spinner.” Oops.

Well! I would forge on regardless. Each piece still had a nice rind of fat—just not the inch or so it had initially. 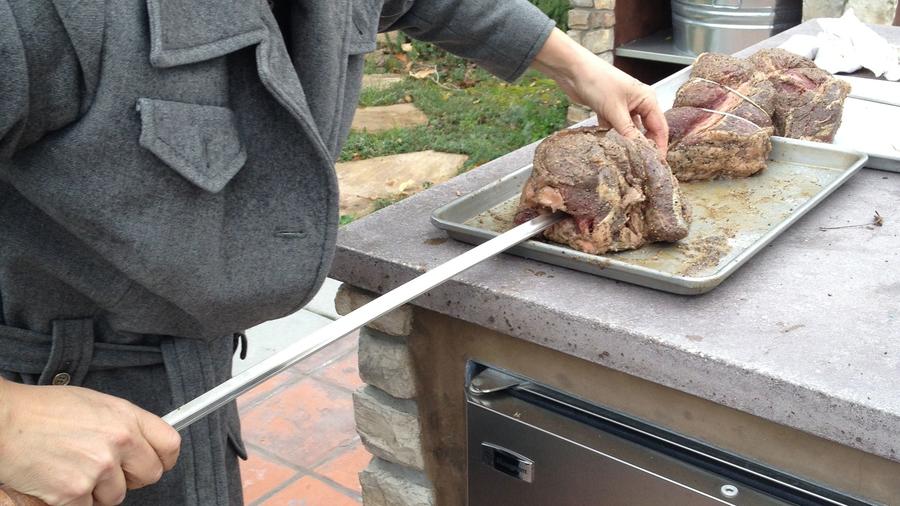 One quick heave, and the skewer was on the fire. 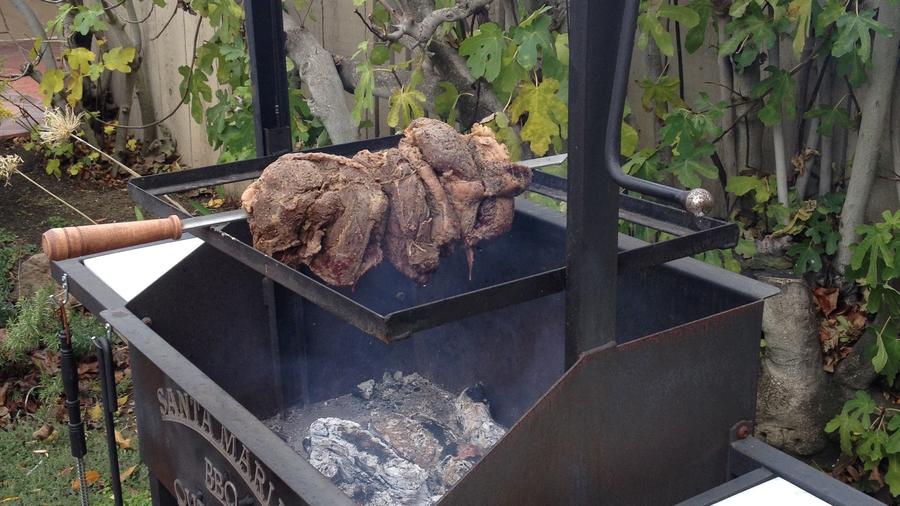 I came back to turn it every 20 minutes or so, cranking the grill lower to sit closer to the heat as it ebbed. It was a little tricky—my pieces were a little lopsided—but in about 1 ¾ hours the meat was cooked to rare (130° on an instant-read thermometer—always a good backup).

After a 20-minute rest, it was time to slide the meat off and slice it. 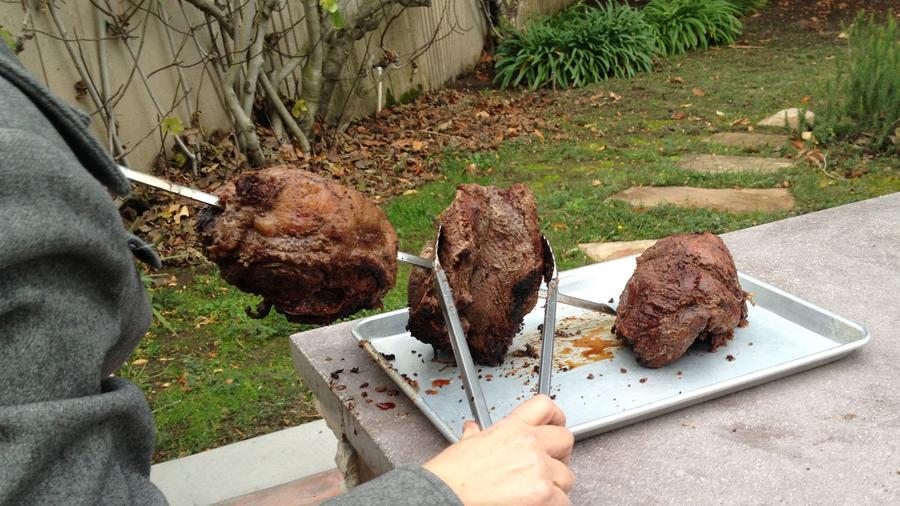 Even with its fat trimmed, it tasted great. It was efficient—enough meat for 30 people, all on one skewer. It wasn’t perfect—Simas told me that mastering the skewer method takes twice-weekly practice for a year. “It’s like welding or bowling or spray-painting. You got to do it all the time to get good at it.” But it was an adventure. When else would I get to brandish a skewer in the middle of the day? 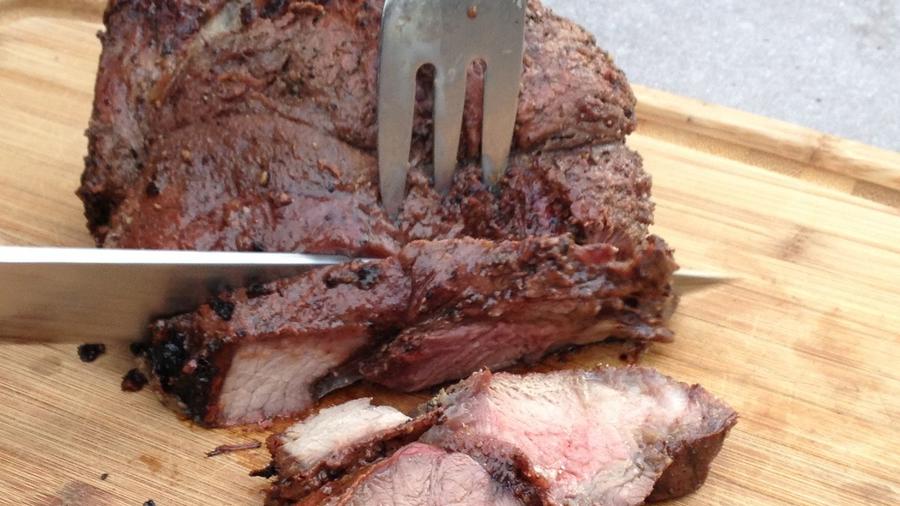 I used a standard-size backyard-style Santa Maria grill (santamariagrills.com). The beauty of this kind of grill is its adjustable cooking grate, which you can crank closer or further from the heat. To use the skewer, I lifted off the grate and used its supportive rim to hold the skewer’s ends.

8 to 10 logs red oak; or, if using another type of wood, add 2 cups red oak chips, soaked in water at least 20 minutes

1. Slice the top sirloin lengthwise, down through the top of the meat, into 2 or 3 pieces, each about 2 in. wide (don’t trim the fat). Mix salt, pepper, and garlic salt, then sprinkle pieces generously with it. Let meat sit 1 to 2 hours at room temperature.

2. Meanwhile, remove the screen (cooking grate) from the grill, leaving the metal frame.  Build a tipi-style fire (see sunset.com/buildfire for pointers if you need them) in the grill and let burn to ashy chunks and low flames, at least 45 minutes. Spread chunks into a thick, even bed. You’re ready to cook. (If you’re not using red oak wood, sprinkle red oak chips onto logs. When chips start smoking, you’re ready to cook.)

3. Skewer each piece of meat onto the skewer in a C shape with the fat either to the left or right (alternate the directions). Set skewer on the frame, crank to about 10 inches above the flames, and cook, turning every 20 minutes or so and lowering screen as fire declines, until meat is a rich medium brown all over and an instant-read thermometer registers 125° to 130° for rare, 1 ½ to  2 hours. Transfer to a board and let rest 10 minutes.

*Order ahead from your butcher–unless you live along California’s Central Coast, where just about every meat shop (including Costco) carries it.