Can You Improve a Chicken’s Life With Cabbage on a String?

Her birds seemed so happy-go-lucky. But what if they were bored? How should she stimulate them? 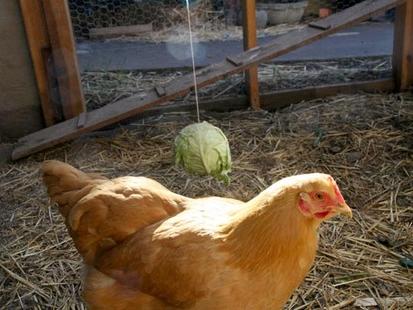 As far as chicken life goes, our flock has a sweet deal: a constant stream of chicken scraps, a swank 10-by-10-foot play area with a small pine tree, a coop with windows, people to pet them and feed them handfuls of grass. But recently I’ve been getting worried about them.

Perusing BackyardChickens.com, I got an idea. Cabbage, hung from the roof of the coop. That way, it could be a nutritious treat and a game of tetherball. Good for them and potentially hilarious! We couldn’t lose.

First step: figuring out how to suspend a head of cabbage in mid-air. Our facilities supervisor, Tony Soria, didn’t think it was at all odd when I showed up in the workshop asking if we could drill through a head of cabbage, but he helpfully pointed out that a drill would probably be overkill. Instead, he poked a hole through the core with a long, sharp skewer, and then threaded butcher twine through, tying a large washer onto the end to keep it secure. 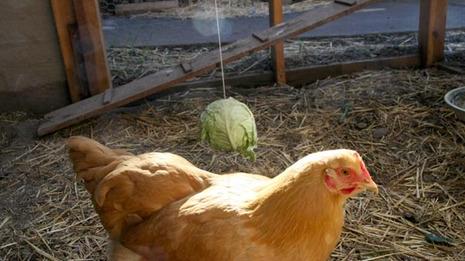 Honey walks on by.
More Videos From Sunset

Sadly, all this effort was for naught. Maybe our chickens are spoiled by the tender greens they get from the garden, but they looked at our cabbage head — which was even organic! — like it was a boulder. Or invisible. Note Honey (above) walking by it like it didn’t exist. It obviously did not register as food for them.

After a week of hanging, I had no choice but to declare the cabbage a failed experiment. But the idea of chicken tetherball stuck with me. So I replaced the cabbage with one of their favorite treats: 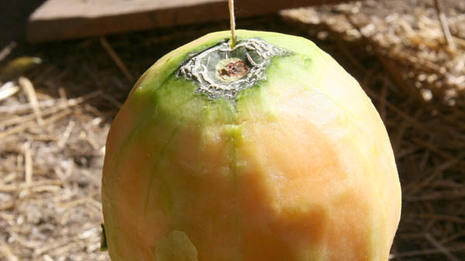 A peeled cantaloupe. This is what it looked like at 11 a.m. Friday. 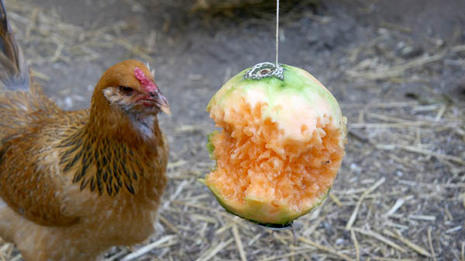 Ophelia was pecking at it like a piñata. It would slowly swing away from her, then come back, and she’d have another bite.

They continued to nibble on it over the weekend, but I got the impression that mobile food isn’t really their thing. They prefer to step on their food and keep it still while they eat, so this morning, I cut the melon down. A few hours later, the only thing left was a little bit of skin.