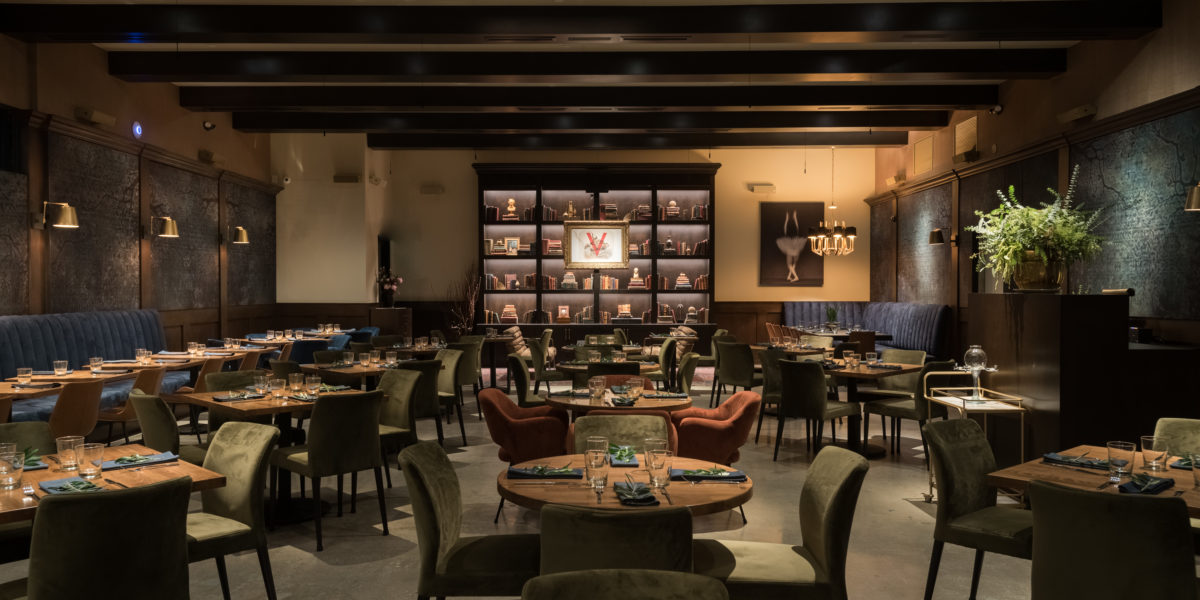 If dining is theater, today’s restaurant acoustics are all the actors shouting their lines simultaneously and as loudly as they can. Modern eateries are deafening—often above 80 decibels, and thus harmful to our ears. The problem: unless you’ve got a state-of-the-art sound system, crafting a nice-sounding restaurant out of a clattering, cavernous industrial space is near-impossible.

Against the odds, VERSE, a restaurant that opened on December 14 in Los Angeles, has that unicorn of a sound system. It’s called a Meyer Constellation acoustic system, and it can cost between $10,000 and $100,000. The system carefully self-calibrates the restaurant’s sound according to presets, but it’s also able to shift the acoustic balance at the tap of co-owner and Grammy-winning sound engineer Manny Marroquin’s finger on an iPad.

The secret to its sound absorption? The 26 Meyer Libra panels—the largest installation of Libra panels in a single room in the world—are cleverly cloaked in Laurent Newman’s dreamy branch and flower graphic imagery and absorb sound, while 60 Constellation speakers capture the room’s sound and actually rerelease it into the space at the appropriate volume level via drop microphones hanging from the ceiling. You can essentially “mix” the sound of the space like it’s a sound studio with an SSL mixing console. Bass traps absorb extraneous sound that hits the ceiling.

“Restaurants are loud, agitating and uncomfortable, and my ears are sensitive to that for obvious reasons,” Marroquin says. “I asked myself how we could get rid of all the frequencies bouncing back and forth, and I realized we had to build a recording studio and put a restaurant in it.”

To achieve this, Meyer employees worked for 14 hours a day for six days, testing the space and tuning the room. Marroquin says his own studio takes two hours to tune by comparison.

The result of all this effort is a 140-seat room that’s seldom too loud for conversing with your dinner companion, nor too quiet to feel uncomfortable carrying on a private conversation. It’s also a room with a mixture of appropriate sounds like music, chatter, and ice rattling against a cocktail shaker, instead of an emphasis on merely the one loudest sound. Subtle Meyer speakers facing the bar and strategically spaced across the room play back the mixed sounds.

For Marroquin, hearing the music while you eat Chef Paul Shoemaker’s adventurous plates is a sweet reward. Playlists will be designed by music industry folks like Julie Pilat, Head of Global Operations at Beats 1/Apple Music, and popular artists Marroquin works with like Alicia Keys, Lizzo, and Bruno Mars.

Snagging a seat at the exclusive ten-top in the kitchen means watching Chef Paul Shoemaker and his sous chef Oscar Torres sprinkle gray sea salt on Australian Wagyu strip loins and lay them down on his almond wood-burning Josper Grill to the sounds of cumbia, rancheros, reggae, and punk, including his favorites Vicente Fernandez and Bob Marley. Shoemaker’s work is by turns playfully tongue-in-cheek, like his brown butter “dime bag” that you consume bag and all before it dissolves in your mouth, or seriously crafted, like his precisely-sliced salmon skins layered with crisps and topped with roe and microgreens.

Marroquin has been planning the concept for five years, and Shoemaker has been writing the menu for just as long. Along with hospitality veteran Rob Ciancimino, formerly of The Sayers Club, they founded a pop-up called INTRO to test their concept, which became VERSE. Shoemaker had 80 items that he began working with five years ago, but when he stepped into Marroquin’s Larrabee Studios next to the restaurant, he says he had an “out-of-body experience.” Inspired by the music, he began writing VERSE’s menu, and by 3am, he knew he was done.

“VERSE is spiritual for me and is much bigger than what I expected or have done in the past,” Shoemaker, who worked at Providence and Bastide, says. “Music and food are experimental and playful in similar ways, and they similarly make people happy through the senses. The music really inspired me.”

Only one other restaurant in California, Comal in Berkeley, has implemented the Meyer Constellation. Marroquin believes that sound systems like Meyer’s will change the landscape of high-end dining.

Live performances will begin this year, with the space able to function as a recording studio, laying the music down onto tracks for posterity and release. Special unannounced performances are expected during the Grammys, where Marroquin is nominated for Post Malone’s song “Rockstar.”

The Best Music Festival for Every Fan, from Diehard Rockers to Foodies

7 Great Portable Speakers for Your Next Adventure