Yesterday we went into our Dead-Midge hive to see if by some chance the bees had managed to replace the queen cell we ripped open 3 weeks a... 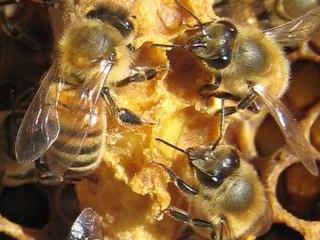 Yesterday we went into our Dead-Midge hive to see if by somechance the bees had managed to replace the queen cell we ripped open 3 weeksago.

Nope. Dead-Midge (hereafter known as Dramatica because ofthat hive’s penchant for drama) is not queenright. There is no queen. Just lotsof drone brood randomly placed all over the frame and multiple eggs crammingthe cells in the crazy way only a laying worker can accomplish. 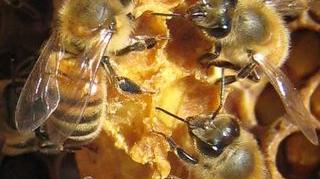 But we also found a mystery: two queen cells (That’s one ofthem in the photo at left). And the girls are cuddling up to these oversizecells like a bunch of maiden aunts hovering around their only brother’s onlybaby.

We don’t know what could be in those big cells.

We don’t thinkit’s possible that there are queens. Bees need fresh eggs or young larvae tomake a queen. And bee development from egg to emergence is very reliable. 16days for queens, 21 days for workers, and 24 days for drones, give or take acouple days.

We’ve counted backward through the month of August every waywe can think to count. It’s been 28 days since we split Veronica and gave Midgeframes of brood, larvae and eggs, so by the calendar, the bees shouldn’t havehad any fresh eggs or larvae to work with within the last 3 weeks.

In fact, the last of the brood from Veronica should haveemerged by now. The youngest worker bee should be about 7 days old. Since aworker bee in summer lives only  38days, this hive is looking at about one more month to live.  We don’t see how there could be any babyqueens in those two queen cells.

But here’s a weird thing. Sometimes—although very rarely—an eggfrom a laying worker will develop parthenogenetically into a female. Anyway, sosays The Hive and the Honey Bee, the beekeeper’s bible.

Now we have a decision to make. Split Veronica and try again? Or let Dramatica die?