Preserving summer flavor for tomato sauce in winter: How sweet it is—and easy when you’re canning with friends

Ever catch yourself drooling while watching Food Network or Fine Living ? A few years ago, I was so inspired by a Martha Stewart Show segm... 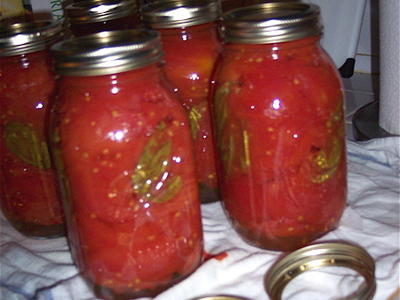 Ever catch yourself drooling while watching Food Network or Fine Living ? A few years ago, I was so inspired by a Martha Stewart Show segment on canning tomatoes that I had to try it myself. I invited over some friends—including Sunset.com editor Sheila Schmitz, who had all the equipment—and here are the glorious results. 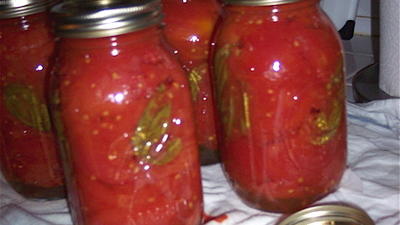 A canning party is a great way to learn alongside friends and get some extra helping hands (the prep work is messy but fun). But always focus when you’re measuring, and remember to turn on the timer—you don’t want runny sauce or, gulp, something tainted because you weren’t watching the time and temperature. 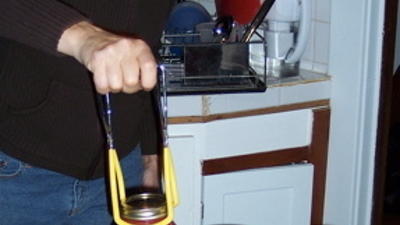 You’ll need some equipment that you probably don’t have lying around your kitchen, canning basics like a jar lifter (think giant tongs—that’s Sheila wielding a jar lifter in the shot above) and a wide-mouthed funnel. In fact, you’ll need to clear out a pretty big cupboard to store a water bath canner. But it’s an essential: This giant enameled pot “processes” your canned goodies by boiling the jars and their contents to the point where any microorganisms that might have intended to munch on them are killed off. (Bug off, botulism! Those are my tomatoes!)

Food poisoning is a very real concern, so always follow processing instructions exactly to ensure safely canned food. Mountain dwellers, make sure you process according to high-altitude instructions; try this PDF (from the University of California, Davis).

If none of your friends has canning equipment to bring, you can get a Home Canning Basics Kit on Amazon for less than $50. It’s likely that your local hardware store still sells 1-quart wide-mouth mason jars (I’ve seen them at several Ace locations), but you can throw in a 12-pack for $14.50 more on Amazon. 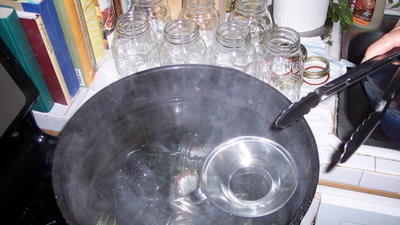 Before you get started, check out the USDA Canning Guide—yes, it was posted in 1994, but really, how many improvements can be made to a technique that was mastered by our grandparents so long ago?

I’m going to “put up” tomatoes again this year (Sheila, you in?). My inspiration this time? Completely dry-farmed tomatoes from Two Dog Farm in Santa Cruz County, on the Northern California coast. They’re amazing. So lusciously sweet and juicy. My 2-year-old daughter gobbled them up plain, grabbing slice after slice without requesting the usual dressing of salt, pepper, and olive oil. 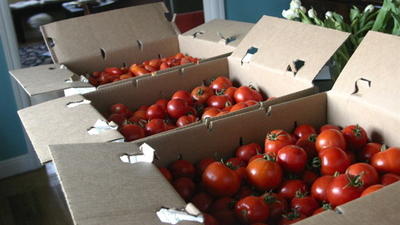 I’m already looking forward to those 18 pounds of tomatoey goodness distilled into 6 quarts of sauce. A whiff of summer on a chilly winter night—I’m drooling just thinking about it.