Please don’t die before I cook you.

If there was ever a moment of ill-preparedness, this was it. Johanna Silver, test garden coordinator-extraordinaire, told me that I needed ... 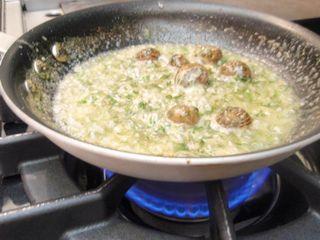 If there was ever a moment of ill-preparedness, this was it.

Johanna Silver, test garden coordinator-extraordinaire, toldme that I needed to cook the escargots TODAY, because they were on the verge ofkicking the snail bucket, so to speak.

The timing couldn’t have been worse. I was up to my elbowsin recipe testing for the magazine and I couldn’t possibly cook them. I hadn’thad time to research the books. I didn’t even know if we had parsley.

But I had no choice. We had been torturing and fatteningthese little guys for days now, and it was only respectful that we followthrough with the project as intended. The alternative would be wasteful, not tomention downright cruel.

I did the quick Internet search and found a few recipesthat, as I had hoped, called for butter, garlic, and parsley. But theymentioned packing the shells and then putting the snails back into them. Huh?How was I suppose to get them out, let alone back in? Why didn’t it mention howlong to cook them?

Never mind, I thought to myself. It can’t be rocket science.I’m an accomplished cook, and I just don’t have any other options.

I melted about 4 tbsp. of unsalted butter in a large skilletand then tossed in our snails and a minced garlic clove. I cooked them forabout 3 minutes, stirring occasionally, then finished with chopped freshparsley and a sprinkle of kosher salt. Voilà. 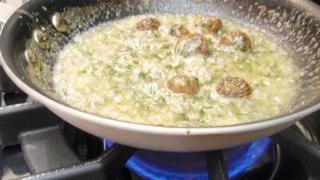 We called in the official tasters (whoever was willing andinterested).

Due to our professionalism and total respect for our foodeditor, Margo True, we waited for her to have the first taste. (Okay, so wewere all too scared to take the first bite and made her do it, but hey, what doyou expect? We may be adventurous, but we’re not completely nuts, as evidencedby Elizabeth’s doubtful expression.) Margo popped the end of her toothpick intoher mouth, gave a few chews and then proclaimed with a wrinkled nose: “It’skinda…mucusy.” 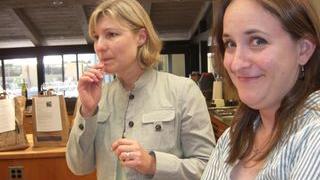 EEEWWWW! I decided that these were not an item that shouldbe served medium rare. Back into the pan they went for a thorough cooking overhigh heat. About 10 minutes later, now with the butter and herbs both very brown, we gave it another go.

“Oh, that’s much better,” said Ms. True. Then Elizabeth andJohanna had a taste. Not bad. Kind of chewy, but not tough. Overall, notdisgusting and definitely resembling the stuff you get for $24 at a fancyFrench place in the city. My taste was fine, but I knew I could do much better than this on the execution.

Next: cooking escargot part deux. Just as soon as I locate our copy of Escoffier.