Above: Ryan plants a tomato Our garden team has been out scouring the nurseries and ordering from seed companies (mainly the excell... 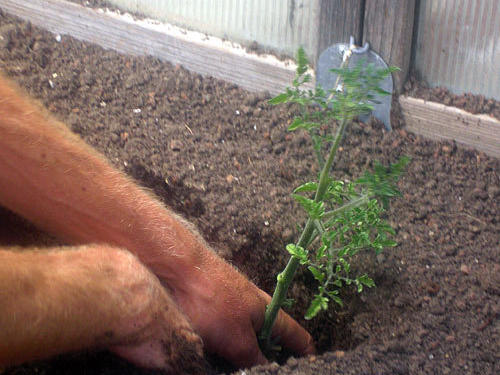 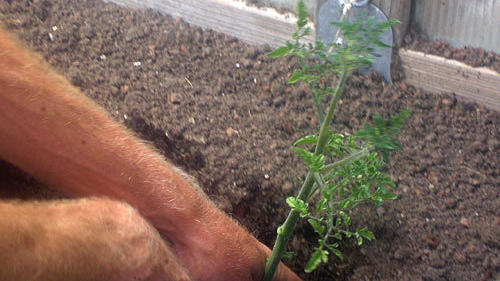 Above: Ryan plants a tomato

Our garden team has been out scouring the nurseries and ordering from seed companies (mainly the excellent Renee’s Garden and Vermont Bean Seed (for garbanzos and corn) and finally all of our plants have arrived for this feast we’re planning.

Ryan makes planting look like a cinch. For the edamame (soybean) and chickpea seeds, he drags a shallow furrow in his nice loose dirt with a stick, drops the seeds in, and covers them over a little—but leaves the trough there “so you know where you put the seeds.” A handy way to avoid accidentally tromping all over your tender almost-breaking-the-surface seedlings.

Our melons (watermelons, cantaloupes, and the honeyed greenish-orange melon called ‘Sharlyn’) go in the widest bed, because of the way they’ll eventually sprawl all over the place. The soil is so loose that all Ryan has to do is plunge his hand down into it to make a hole; then he thunks the seedling out of the pot like he’s burping a baby, pops it in the hole, and fills it in with a couple of sweeps of his hand. When you’re doing this with tomatoes, he says, you want to snap the bottom branches off and bury the plant up to the highest fully formed leaves. The hairs along the buried stem will form into roots and make the plant stronger and more stable.

Back to melons. Ryan says he’s going to be nurturing and then stern with them.“We’ll water real heavily to get some good growth. Then when the fruit forms, we’ll wean them off water to sweeten them up.” On his farm in Pescadero, Ryan does a lot of dry-farming, and it really works for certain fruits and vegetables–tomatoes especially. The flesh gets dense and is much sweeter. 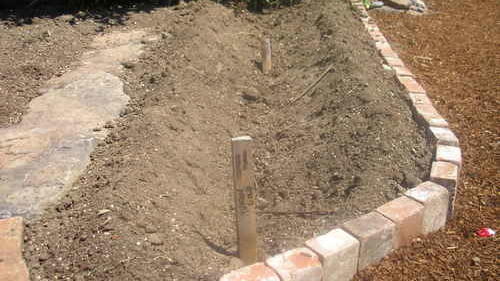 Above: a freshly dug trench for potatoes

It’s pretty cool to watch Ryan planting potatoes, which, like everything else, he does in about 30 seconds. With his thumb, he pushes tiny whole Yukon Golds, each with an eye sprouting, into the bottom of a deep trench (the sides of which he’ll mound around the shoot as it grows, so the baby tubers forming just below the soil have something to grow in). Seed potatoes can also be just sprouting hunks of big potatoes. “Plant every 10 inches or so. You want to crowd them a little. Otherwise they grow too big, and get ‘hollow heart.’” I think of all the times I’ve bought potatoes at the grocery store and found pockets of air inside. Well, that’s hollow heart; the farmer who grew them placed his potatoes too far apart. 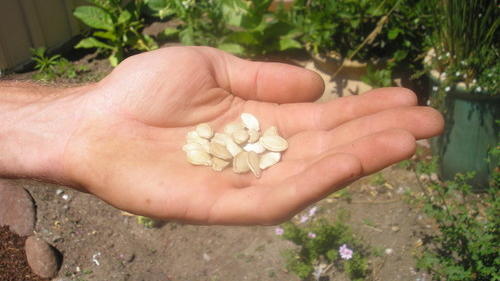 The ‘Climbing Trombetta’ squash seeds look like those dried melon seeds you see in Middle Eastern groceries, sold as a salty snack to have with tea. Ryan makes a furrow and rapidly pokes the seeds down one at a time with his finger. Then he pinches the sides of the trough together, zip zip zip. Presto. I can’t wait till these zucchini form. Lauren Swezey, our garden special projects editor, says they’re extremely flavorful and also have gorgeous twisting shapes that resemble (surprise surprise) trombones.