The queen bee is piping in the hive

Last week when we opened Veronica’s hive (at left) to inspect, we were amazed to hear a high, shrill, loud whining. Zzzeeeeeeeeeee! Zzz... 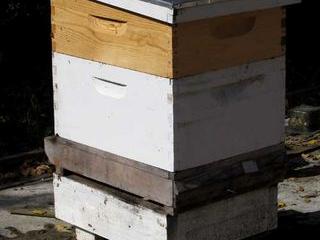 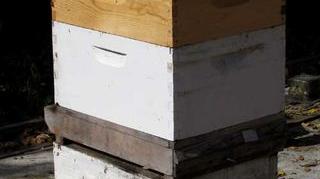 Last week when we opened Veronica’s hive (at left) to inspect, we were amazed to hear a high, shrill, loud whining.

It sounded exactly like a queen bee piping, or, anyhow, exactly like they sound in YouTube files on the internet. Up until now, I’ve never heard any real-life bees make noises like this. It was pretty exciting to hear these sounds coming from our hive.

Piping are the sounds made by a mated queen or a virgin queen (an recently emerged, unmated queen). The urgent high-pitched buzzings are like a battle cry to any other queen bees in the hive. The queens who are still in queen cells will respond with short buzzing called quacking. You can hear them on this video here (turn up the sound on your computer), and here (this video is kind of long, so put some honey in your tea and settle back to watch.).

The free queen may open the queen cell and kill the unemerged baby queen. Or, if the other queen has emerged by the time they find each other, they will often fight until one is dead.

It’s mighty rough being royalty in the hive.

We spotted Veronica on the first frame we pulled, She was slowly making her rounds and laying eggs (there was one full frame of nothing but beautiful white eggs). But we didn’t see a virgin queen, so we’re not sure if it was Veronica tootling along, or if we didn’t spot a virgin queen because we weren’t aware of what we should be looking for.

Since the cluster of bees in Veronica is so small, we didn’t want to disturb her anymore, so we put everything back together to wait and see what happens. We’ve been watching the outside of the hive as much as we can, but haven’t seen any queens taking mating flights.

It’s definitely bee season. We’ve got two packages of bees arriving next week. While waiting, I’ve been enjoying the blog of Mistress Beek in Albuquerque. I love this post, entitled High Drama and the Virgin Queen Piping.

Veronica in the middle of her retinue.