Lady looks a little bit like a dude, but is probably still a lady

By Elizabeth Jardina, Sunset researcher So, our feathers have been ruffled lately by a nagging fear that one of our pullets is a rooster. ... 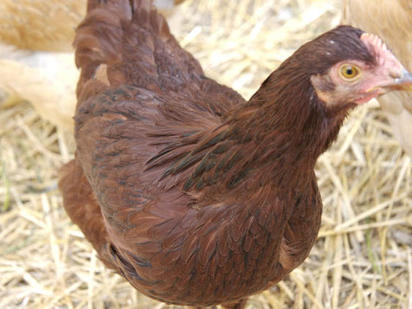 So, our feathers have been ruffled lately by a nagging fear that one of our pullets is a rooster.

That could be really, really bad news. If one of our shes is a he, we wouldn’t legally be able to keep him in our particular municipality (Menlo Park, California) because roosters crow. Loudly. Often at inappropriate times of day and night.

The chicken in question is Carmelita, who you may remember as the sturdier of our two Rhode Island Reds. 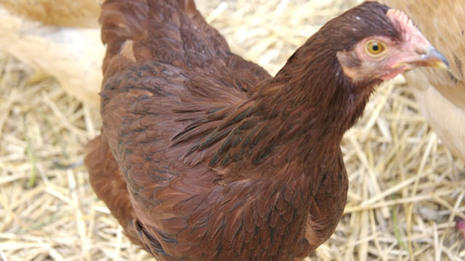 I was describing her beautiful green-tinged feathers to our chicken guru, Jody Main, and Jody got really quiet.

Then, she said: “Uh-oh.”As it turns out, Rhode Island Red roosters have greenish feathers on their necks, and especially on their tails. Carmelita (above, note the neck) is developing dark feathers that flash green in sunlight.

Then Jody asked me if she was really shiny.

She is. She looks almost wet.

Apparently that too is a sign of a rooster.

It was time to consult the experts: the forums at BackyardChickens.com. They helpfully have an entire bulletin board called What Breed or Gender is This?

After an extensive perusal of photos of Rhodies at various stages of development, I think I’m prepared to say that I don’t think Carmelita is having a gender-identity crisis. At this point, Carmelita and our other Rhodie, Ruby, are 16 weeks old; they were born about Aug. 22. By this point, it seems like most Rhodie roosters start developing big red combs and pronounced wattles (those red things that hang down from their cheek/neck area.) Her comb is quite petite, and her wattles, while they exist, are not very prominent.

Now, it is possible for roosters to be late-bloomers. BackyardChicken.com users report “mute roos” not revealing themselves as the non-egg-laying sex until 22 weeks, but we’re hoping for the best with our suspiciously shiny Carmelita. And we’re on alert for stray cock-a-doodle-doos. (Right now both Carmelita and Ruby’s main vocalization has an uncanny resemblance to a creaky door. No real clucking yet, and certainly no crowing.)

Readers with chicken experience — you don’t think Carmelita is really Carl, do you? Reassuring comments would be appreciated. I’m not sure what we would do with her if she’s a him.

Speaking of our lovely flock, they’ve been braving our recent bout of relatively coldweather with fluffy aplomb. We were a little bit worried about howthey’d weather our nighttime lows, which have been dipping into the30s, but apparently our Bay Area weather just isn’t that cold for achicken.

It’s also about time that we properly introduce them to the world. How about some photos? 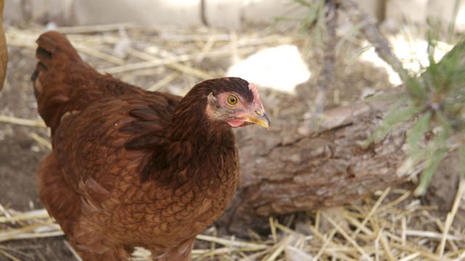 Ruby, all grown up.

You may remember Ruby as our delicate runt, the chicken we were most worried about. Compared to the others, she was tiny! And she spent all of her first week of life nodding off under the heat lamp, then being startled back awake. Plus, she fell victim to the dreaded “pasty butt.” (You think raising a chicken is easy??)

But oh, how our lovely lady has grown. Although she doesn’t cluck yet — again, the creaking door sound  — she’s blossomed into a healthy adolescent. (A pullet, technically. They’re not hens till they’re one year old.) 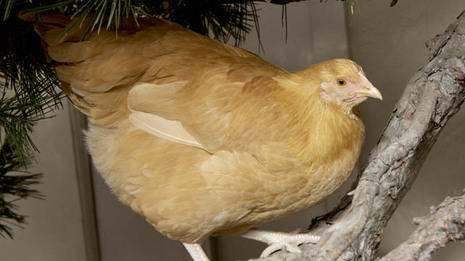 Honey perches on a Mugho pine.

Quick facts
Name: Honey
Breed: Buff Orpington
Age: 17 weeks.
If she were a Spice Girl, she’d be: Sporty. Good natured, likes to jump in trees (or on your arm).

Honey is one of the flock leaders. She’s not shy at all — she’s the first to jump up and grab whatever offering you’re bringing. And she’s the one we used to let fly up on to our shoulders and laps. She doesn’t mind being picked up as much as the other ones, and likes to be stroked. 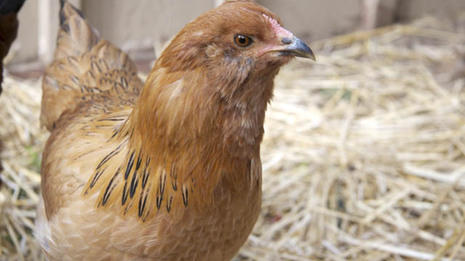 If she were a Spice Girl, she’d be: Scary.

Although she used to be one of our most docile girls, willing to be cuddled and have her chest stroked until she was six weeks old, Alana has gotten quite suspicious of us these days. She will not consider being picked up, and she’s one of the last to cluster around you when you bring them food. Plus, that glare! 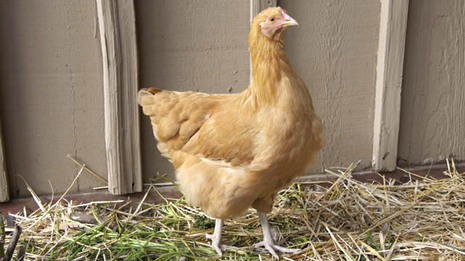 If she were a Spice Girl, she’d be: Baby Spice. Adorable, busty, sweet.

Charlotte  is slightly lighter in color and has rufflier feathers than her sister Honey. Both Orpingtons were actually named “Charlotte” for the first three weeks we had them because we couldn’t tell them apart. Our eagle-eyed art director Jim McCann was the first to notice that Honey was slightly darker, although we mere mortals — who work mostly with words, not photos — couldn’t tell the difference until weeks later. 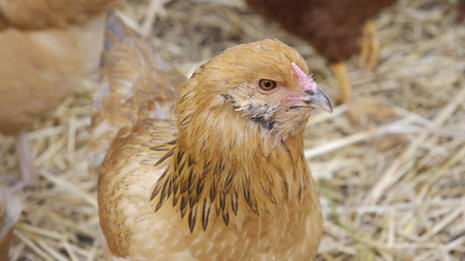 If she were a Spice Girl, she’d be: Posh, I guess. I’m tempted to say Scary again because the Ameraucanas look so fierce, but I’ve kind of written myself into a corner with this Spice Girls thing.

Ophelia went from being one of our shyest chickens to one that — grudgingly — tolerates being picked up. She’s a flock leader too, always ready to take a bite of quackgrass when offered.