This group of backyard farmers is one of ten finalists in our One-Block Party contest. The winner will be announced on September 20, 2011... 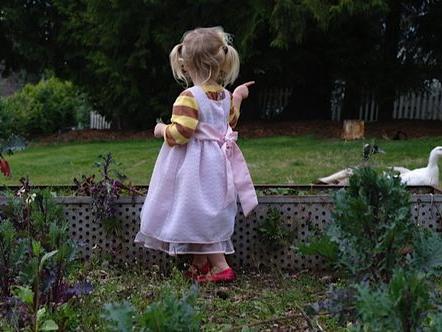 This group of backyard farmers is one of ten finalists in our One-Block Party contest. The winner will be announced on September 20, 2011. 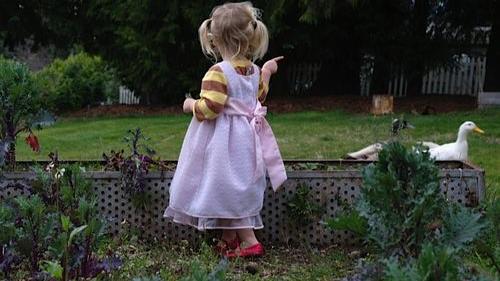 Harvey’s daughter, Grace, with kale and ducks, in the family yard.“Last April I was sitting on my houseboat in Sausalito,” says team organizer Jennifer Harvey. “My garden consisted of 2 dead tomato vines, one container of basil that had gone to seed, and Meyer lemons I scavenged from the community landscaping in the center of the dock. A year later I’m 2 blocks from downtown Bellevue, on 1/2 acre with mature fruit and nut trees, grapes, berries, and 5 baby chicks in my laundry room until they are big enough to join our communal ducks outside. I have a big hole in the sod, with tiny sprouts peeking out, hoping it is almost summer.  … I now find myself slightly terrified by all the possibilities—and no specific direction. Last week I was a woman wandering around the plots with a wheelbarrow, a shovel, and a daughter in a princess gown. Where was all this going?!”

Then Jennifer saw our contest, and within a short span of time has organized a gung-ho one-block team in her new neighborhood. They’ve named themselves in honor of the food at the mall just a few blocks away. “We want all the variety of a food court, but this block will be much more delicious. A salad bar, an ice cream place, pizza…The Food Court has it all.” They’re right across from Lake Washington, with its salmon and trout, and plan to bring in red meat for curing, milk for cheesemaking and the ice cream, and flour for homemade pasta. Kids will get in on the action, too (they’re planning to make chalk from eggshells!) Team Food Court is cooking up a tremendous-sounding feast.