Our new bees arrived this week! We asked our fans on Facebook for name suggestions and ... We’ve named the new queen Califia, after the ...

Our new bees arrived this week! We asked our fans on Facebook for name suggestions and …

We’ve named the new queen Califia, after the queen of the mythical Island of California! Thanks to Chryss Yost for her suggestion on our Facebook page.

Califia’s girls are to populate our topbar hive.  We’ve never installed bees before. It was quite an experience.

Kimberley picked up the wooden box of bees (this photo is of the box of bees in her car). She was safe in the car; the screened sides of the box contained the bees. A can filled with sugar syrup hanging down in the center of the box kept the bees fed, and the queen, suspended to the side of the can, kept the bees happy.

And, all suited up, we began the “installation.” 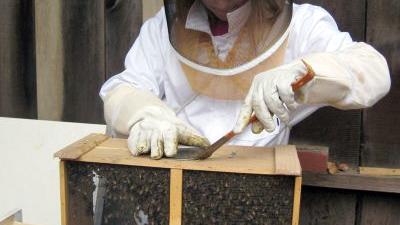 We pulled the can from the box, then took Califia’s little cage from the box. The bees clumped around her and didn’t want to leave her, and we had to gently shake and brush them off.

Then Brianne (who just installed her own bees last weekend) removed the little cork in the queen cage and stuffed in a marshmallow.

The idea is that the bees will eat through this candy plug in a few days and release her. We hung her little cage inside the hive.

Then we installed the bees. It was really more like dumping them.

Kimberley banged on the side of the box, then shook it over the hive and a ball of bees fell into the bottom of the hive. 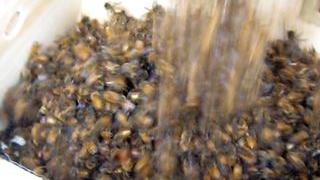 They surged like a wave up the sides, and began clumping around the queen.

Not all the bees came out of the box, and there was quite a bit of banging the box on the ground and shaking it to dislodge the remaining bees. In the end we put the box on the top of the hive and told the 50 or so reluctant bees to find their own way out.

Bees were flying everywhere, dazed and confused, but once we put the top bars in place, they began to settle down and come to their entrance holes to fan the pheromones that tell the other bees “this is home.”

After about 2 hours, most of the bees had settled down and were scouting the area. At the end of the day, we could see them (through the observation window!) in a big cluster around the queen.

Now we wait excitedly for our new worker bees to build their natural comb on our top bars!