How a chicken lays an egg 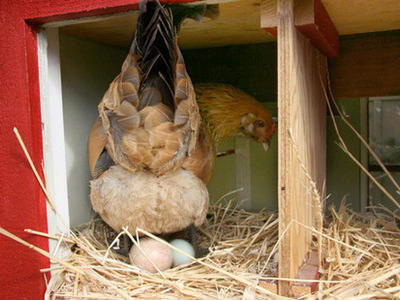 “The acme of food packaging.”

Ophelia in the nest box, with her blue egg (the other is a decoy). Photo by Elizabeth JardinaEvery day, our chickens deliver eggs to us—anywhere between two and six, depending on the weather (in winter, they slow down). Even though we’ve been collecting them for over a year now, we can’t quite take them for granted. Each egg is slightly different in shape, or color, or thickness of shell, and still seems faintly miraculous to me. I mean, put yourself in the hen’s position. Reproducing yourself every day (or trying to, at least) is no small feat.

It’s pretty hard to catch a chicken in the act of laying an egg, if you have a day job. The thing pops out in less than a minute (although we did get close with Ophelia, above). If you’re really curious, watch this video, courtesy of a Barred Rock owner.

What about the preamble, though—the formation of a bulky egg with a shell on it, within the chicken?

Here’s how it works.

Every female chick is born with thousands of undeveloped yolks, or ova, grouped together near the middle of her backbone in a larger cluster, the ovary.

When a hen is ready to lay, these ova begin to mature, and every 24 to 26 hours, a fully formed egg yolk is released into the oviduct. As the yolk moves down this tube, it’s coated with layers of gel-like albumen (that’d be your egg white) and wrapped in a thin, translucent membrane. If a rooster had been on the scene, sperm would probably have fertilized the yolk before it met the albumen.

Then comes the amazing part. As the soft, shell-less egg moves toward the exit, it passes through a floating cloud of  calcite (calcium carbonate).

The egg’s membrane, which I’d thought of mainly as that annoying film that you have to peel off a hard-boiled egg, is actually pretty wondrous. All over its surface are precisely spaced protein points. These attract the calcite particles, which build up on the membrane in crisp, geometric columns until they make a shell. Essentially, they form a thin crystal that covers the egg. How appropriate that Fabergé used eggs as the model for his fantastic creations.

Shortly afterward, the hen gets an urge and climbs into the nest box. After a bit of heaving and panting, out pops the egg. There it is, protein-rich, marvelous, ready to go. We take it away to eat, and the hen starts making another one, as if it were the most ordinary thing in the world.