While team beer contemplates what style of brew to produce for the next One Block Feast, we are anxiously following the development of ou... 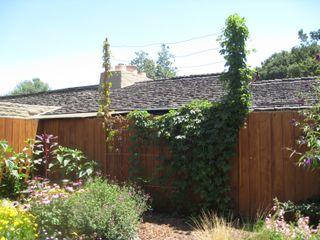 While team beer contemplates what style of brew to produce for the next One Block Feast, we are anxiously following the development of our hops that we planted last year. As we expected, the first year we achieved very little hop production but an abundance of plant growth. This year is quite a different story. There are plenty of hop flowers developing on the vines, so many in fact that we may have to get inventive with the left over bounty. We are currently growing 2 varieties of hops, ‘Nugget’ and ‘Centennial’. Both are excellent choices for our climate.

It was the Romans who first used hops but it was as a food source. Apparently they used the new tender shoots and leaves in salads. On their conquest to the north they introduced hops to England, and in the mid-fourteenth century there was mention of hops being used in beer. Hops were introduced to the United States from England in 1629. Prior to that, in place of hops, beer was made with herbs and spices producing a drink called gruit. If you think some of the beers on the market today are bad, you can imagine what this stuff must have tasted like. Whoever introduced hops to beer for the first time found that there were a preserving quality to the addition. Prior to that the gruit didn’t have much of a shelf life and would readily spoil. good example of hops used as a preservative is the India Pale Ale. When the British shipped beer to the colonists in India, they would add extra hops to the casks of beer to preserve the flavor for the long journey. The beer would achieve an extra hop aroma and bitterness but would not spoil, thus the origin of today’s IPAs.

Fibers from the hop vines were used as a flax substitute and also used to make baskets. The young shoots can be eaten as a boiled vegetable. The spent hops used in the brewing process are used as a food source for sheep, and then there is the insomniac’s dream: the hop pillow. 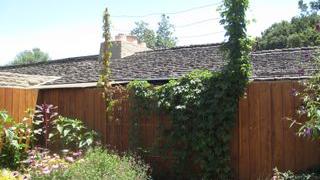 Of our two hop plants, the ‘Nugget’ is performing best. After doing some research on how to manage our plants when the rhizomes started to produce shoots or bines, I decided to remove all but five of the shoots from our ‘Centennial’ hop plant, of which there were many. Apparently this is supposed to eliminate a lot of unwanted growth and make it easier to harvest our bounty. Also, the source said to remove the bottom leaves off of the stems a couple of feet above the ground to help prevent the spread of disease like downy mildew and insect pests. Well, as the photograph shows, something went terribly wrong because we lost most of the plant to some sort of die back; perhaps verticillium wilt. If it’s not broke, don’t fix it. The ‘Nugget’, which we didn’t tinker with, is thriving beautifully and will be the hop used in our next beer. 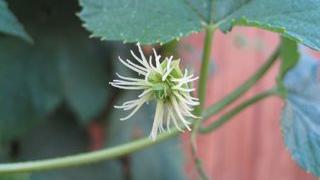 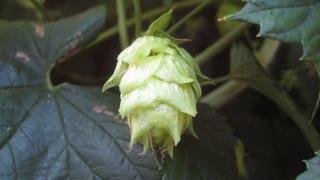 When we planted our hop rhizomes there was a wire grid attached to the fence behind our planting area which provided us with a structure for the plants to climb up. On each end of the grid we attached a round wooden pole that extended about 7 feet higher then the fence. We secured several eye screws to the poles at 1-foot intervals and ran wire from one post to the other. This gave us plenty of room for the hops to grow upward. Hop vines climb in a clockwise manner and can grow as high as 40 feet. “Feed me Seymour”.

The vast majority of hops on the market today are grown in the Yakima Valley in Washington State and the production of beer uses 98 percent of the world’s hops. Hops are added to beer to achieve flavor, aroma, to help with the preservation of the beer and to add a balance to the malt flavor. Some of the flavors and aromas that are expressed by hops are flowery, spicy, grapefruit, citrus, pungent and woody. When making our beer we prefer to add whole hops to our boil so that when they move through the wort the bracts that make up the hop flower will pick up proteins that may cloud our final product plus whole hop flowers are easier to remove through filtering.

Hops are measured in bittering units called Alpha Acid. Though all hops have a distinct flavor and aroma they all contain a product called lupulin that basically are very small yellow balls of resin located at the base of hop flower bracts. The alpha acids in the resin contribute to the bitterness of beer. The lupulins vary in color from a pale to a deep yellow. Nuggets tend to have alpha acids in the 10 to 14 % range, which is on the high, bitter end. They will provide a spicy herbal quality to beer. 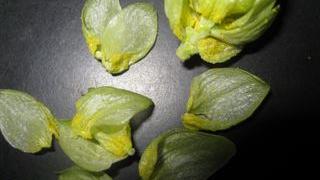 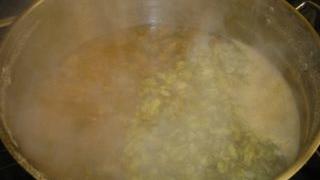 As with anything there is a great deal of chemistry involved in the breakdown of hops in the brewing process. Hops create a sedative value, humulone and lupulone (chemicals found in hops) have anti-inflammatory and antibacterial properties and help to preserve beer. They are also said to produce a calming effect. Heck, I always thought it was the alcohol.

If you are interested in trying to grow your own hops you can purchase the rhizomes (roots) in the spring. Pay a visit to your local brewing supply store and they can set you up, but you might find more variety shopping online. Perhaps you might know someone who is presently growing hops who would give you a root cutting in the dormant season. Hops rhizomes should be thinned annually to avoid excess plant growth the following year.by Rick La Frentz, Sunset beerless leader